Fossil fuel-fired power plants, such as this coal-fired one, are major sources of CO2 emissions, the main culprit in manmade climate change.

Despite progress in clean energy, Americans will continue to rely on fossil fuels for years to come. In fact, coal-, oil- and natural gas-fired power plants will generate 69 percent of U.S. electricity as late as 2035, according to the U.S. Energy Information Administration.

Such sobering projections have sparked a wide range of proposals for keeping the resulting carbon dioxide (CO2) out of the atmosphere where it traps heat and contributes to global warming. Berkeley Lab scientists are using computer simulations to evaluate one promising idea: Pump it into salt-water reservoirs deep underground.

Underground, or geologic, carbon sequestration “will be key tool in reducing atmospheric CO2,” says George Pau, a Luis W. Alvarez Postdoctoral Fellow with Berkeley Lab’s Center for Computational Sciences and Engineering (CCSE). “By providing better characterizations of the processes involved, we can more accurately predict the performance of carbon sequestration projects, including the storage capacity and long-term security of a potential site.”

Taking advantage of the massively parallel computing capacity of Berkeley Lab's National Energy Research Scientific Computing Center (NERSC), CCSE researchers led by John Bell have created the most detailed models yet of the mixing processes that occur at the interface of the sequestered carbon dioxide (CO2) and brine.1 These simulations—including the first three-dimensional ones—will help scientists better predict the success of this kind of sequestration project.

Down With Carbon Dioxide

Carbon sequestration ideas run a wide gamut, from mixing CO2 into cement to pumping it into the deepest ocean waters. However, geologic sequestration-projects are promising enough that some are already underway. In this type of sequestration, CO2 from natural gas-, oil- or coal-fired power plants is pressure-injected deep into stable geologic formations. "The natural first picks [for these sites] are depleted oil and gas reservoirs," says Karsten Pruess, a hydrologist with Berkeley Lab's Earth Sciences division and a co-author of the study. 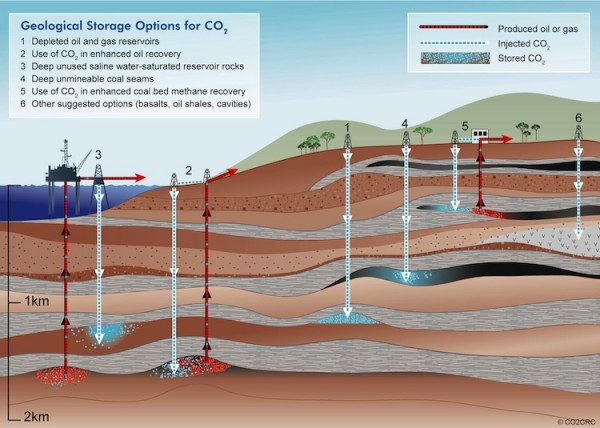 However, the problem with this "put-it-back-where-it-comes-from" notion is that combustion generates about three-times more CO2, by volume, than the fossil fuels burned. "So, even if all these old reservoirs were good targets—and not all are—the capacity available isn’t nearly enough," Pruess concludes.

Saline aquifers offer a promising alternative. The brine that permeates these porous rock formations is unusable for crops or drinking, but given enough time, it can lock away some CO2 in the form of a weak acid. Meanwhile, the solid-rock lid that prevents saline from welling up to the surface (the caprock) also traps injected CO2 underground.

As CO2 diffuses into the brine, the top, more concentrated layers (indicated in red) begin to sink, triggering a convective process that churns up fresh brine and speeds the salt water’s CO2 uptake. The arrows in the last frame (right) indicate the direction of flow. (Select image to enlarge.) Image courtesy George Pau

According to Pruess, when CO2 is first injected into an aquifer, it forms a separate layer, a bubble of sorts, above the saline. Over time, some CO2 will diffuse into the brine, causing the brine density to increase slightly. As more of the CO2 diffuses into the water, the resulting layer of carbonic acid (now less buoyant than the water below it) sinks. This churns up fresh brine, and a convective process kicks in which dramatically increases the rate of CO2 uptake, compared to diffusion alone. This process can take hundreds, even thousands of years, but scientists haven't fully quantified the factors that influence and trigger convection."The processes by which CO2 dissolves into the brine are of serious consequence. If you can determine the rate this will occur, then you can more accurately determine how much CO2 can be stored in a given aquifer," said Pau.

Because scientists can't wait hundreds of years for answers, they are using NERSC supercomputers to run mathematical models that simulate the processes involved.

Geological models that break the problem into fixed size pieces cannot reveal phenomenon needed to understand sequestration because they have either insufficient detail or require too much computation to be practical. "About 100 meters resolution is the best we can do," Pruess says.

Because convection effects start at scales smaller than a millimeter, they are typically invisible to these geological models. That's why Berkeley Lab's CCSE and Pruess collaborated to develop a new simulation code. The code combines a computing technique called adaptive mesh refinement (AMR), with high-performance parallel computing to create high-resolution simulations. The team's simulations were performed at NERSC using 2 million processor-hours and running on up to 2,048 cores simultaneously on a Cray XT4 system named Franklin. 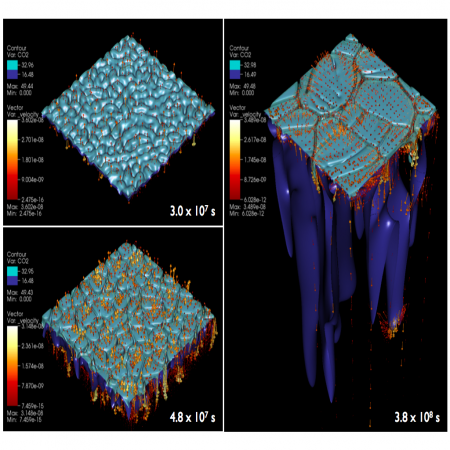 These three-dimensional simulation snapshots show the interface between sequestered CO2 and brine over time. (Select image to enlarge.) The sequence, starting at the upper left frame and proceeding counterclockwise, shows a dramatic evolution in the size of the convection cells with time. Courtesy George Pau.

Called Porous Media AMR, or PMAMR, the code concentrates computing power on more active areas of a simulation by breaking it into finer parts (higher resolution), while calculating less active, less critical portions in coarser parts (lower resolution). The size of the chunks, and thus the resolution, automatically shifts as the model changes, ensuring the most active, critical processes are also the most highly resolved. This ability to automatically shift focus makes AMR a powerful tool for modeling phenomena that start small and grow over time, says Pruess.

PMAMR simulations might also be used to help geologists more accurately track and predict the migration of hazardous wastes underground or to recover more oil from existing wells.

And the team's three-dimensional simulations could help scientists uncover details not apparent in two-dimensional models.

The next challenge the team faces involves extending and integrating their models with large-scale models. "If you look how much CO2 is made by a large coal-fired power plant, and you want to inject all that underground for 30 years, you end up with a CO2 plume on the order of 10km in dimension," says Pruess. This free CO2 will continue to migrate outward from the injection site and, if the aquifer has a slope, could eventually reach drinking water aquifers or escape at outcrops hundreds of kilometers away. "We are very interested in the long-term fate of this thing," says Pruess.