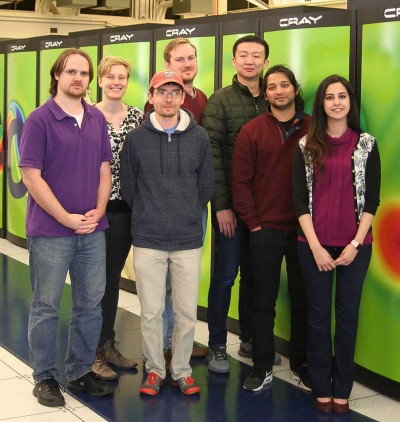 Since introducing the NERSC Exascale Scientific Applications Program (NESAP) in 2015, NERSC has hired more than a dozen postdoctoral fellows and placed them with NESAP code optimization teams. The postdocs are working in multidisciplinary teams composed of computer scientists, applied mathematicians, domain scientists and performance optimization experts that are helping NERSC users transition codes to the Cori system.

Here’s a look at the current roster of NESAP postdocs:

Hugo Brunie joined NERSC as a NESAP for Simulation postdoctoral fellow in April 2019. He is working at Berkeley Lab, on performance precision tuning optimization, with Costin Iancu, Khaled Ibrahim and Samuel Williams from CRD and with Jack Deslippe, Thorsten Kurth and Brandon Cook from NERSC. His research aims at reducing execution time, energy consumption and memory usage of NESAP scientific applications belonging to ExaFEL project (among them simtbx module of CCTBX and Multi-Tiered Iterative Phasing applied to Fluctuation Scattering) . Hugo received his Ph.D. in high-performance computing from Bordeaux University, in January 2019. He was working in both CEA Bruyères-le-Châtel and INRIA Bordeaux Sud-Ouest under the direction of Patrick Carribault and Denis Barthou. His research focused on accelerating scientific applications on Heterogeneous Memory Architectures such as INTEL KNL with MCDRAM in flat mode.

Yan Zhang joined NERSC in Dec 2018 as a NESAP for learning Postdoc. He is currently working on deep learning based approach to study fMRI images of human brain on HPC systems. Yan has a Ph.D. in Electrical Engineering at Northeastern University where he worked on using signal processing and x-ray scattering techniques to study biomacromolecular structures in biomass. After graduation, he worked at Argonne National Laboratory on machine learning and smart sampling for scanning electron microscopy. Yan also worked at Seagate Technology and Rudolph Technology as interns on SEM and AFM image analysis.

Muaaz Awan joined as a NESAP postdoc in April 2019 immediately after completing his PhD in Computer Science from Western Michigan University. His PhD dissertation was focused on High Performance solutions for Bioinformatics algorithms using GPUs. Previously, he has worked with the Integrative Omics group at Pacific Northwest National Lab on the development of GPU accelerated methods for challenges in meta-proteomics pipeline. As a NESAP postdoc, Muaaz is working with the ExaBiome group and helping them in preparedness of their metaHipMer pipeline for the NERSC-9 system.

Laurie Stephey, a NESAP for Data postdoc, is working with the DESI (Dark Energy Spectroscopic Instrument) project to help make their large-scale data processing run efficiently at NERSC. This can be especially challenging since much of the DESI code is written in python, a very popular language that is convenient for developers but not traditionally used in HPC. She is employing strategies like MPI using mpi4py and Just-In-Time compilation using numba to make the DESI simulation tools run faster. In 2009, Laurie earned her B.A. in Physics from Rollins College in Orlando, Florida. In 2017, she earned her Ph.D. from the University of Wisconsin-Madison studying edge physics in the HSX and W7-X stellarators. Many of Laurie's colleagues in plasma physics are NERSC users, so she has been familiar with NERSC for several years. Laurie is excited about the frontiers in HPC for scientific applications, and is glad to be working on these research questions at NERSC.

Yunsong Wang joined NERSC as a NESAP for Data postdoctoral fellow in January 2018. He is working with Paolo Calafiura's team at Berkeley Lab on performance optimization of Geant and ROOT, two important simulation codes used for the ATLAS experiment at CERN. Yunsong received his Ph.D. in high-performance computing from Maison de la Simulation of CEA Saclay and École Polytechnique in December 2017, where his research focused on accelerating Monte Carlo neutron transport simulations by using emerging many-core systems. 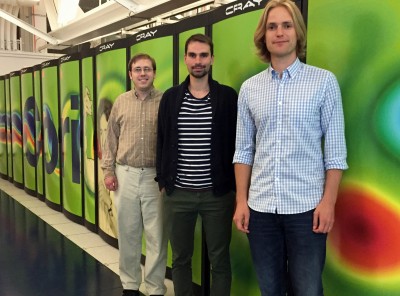