Nanostructures Half a DNA Strand-Wide Show Promise for Efficient LEDs

Nanostructures half the breadth of a DNA strand could improve the efficiency of light emitting diodes (LEDs), especially in the “green gap,” a portion of the spectrum where LED efficiency plunges, simulations at the U.S. Department of Energy’s National Energy Research Scientific Computing Center (NERSC) have shown.

Using NERSC’s Cray XC30 supercomputer “Edison,” University of Michigan researchers Dylan Bayerl and Emmanouil Kioupakis found that the semiconductor indium nitride (InN), which typically emits infrared light, will emit green light if reduced to 1 nanometer-wide wires. Moreover, just by varying their sizes, these nanostructures could be tailored to emit different colors of light, which could lead to more natural-looking white lighting while avoiding some of the efficiency loss today’s LEDs experience at high power. 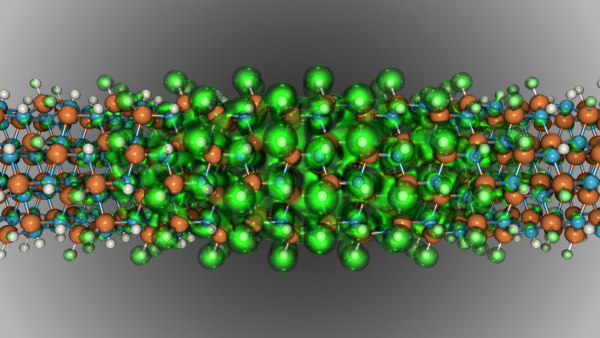 Their results, published online in February as “Visible-Wavelength Polarized Light Emission with Small-Diameter InN Nanowires,” and will be featured on the cover of the July issue of Nano Letters.

LEDs are semiconductor devices that emit light when an electrical current is applied. Today’s LEDs are created as multilayered microchips. The outer layers are doped with elements that create an abundance of electrons on one layer and too few on the other. The missing electrons are called holes. When the chip is energized, the electrons and holes are pushed together, confined to the intermediate quantum-well layer where they are attracted to combine, shedding their excess energy (ideally) by emitting a photon of light.

At low power, nitride-based LEDs (most commonly used in white lighting) are very efficient, converting most of their energy into light. But turn the power up to levels that could light up a room and efficiency plummets, meaning a smaller fraction of electricity gets converted to light. This effect is especially pronounced in green LEDs, giving rise to the term “green gap.”

Nanomaterials offer the tantalizing prospect of LEDs that can be “grown” in arrays of nanowires, dots or crystals. The resulting LEDs could not only be thin, flexible and high-resolution, but very efficient, as well.

“If you reduce the dimensions of a material to be about as wide as the atoms that make it up, then you get quantum confinement. The electrons are squeezed into a small region of space, increasing the bandgap energy,” Kioupakis said. That means the photons emitted when electrons and holes combine are more energetic, producing shorter wavelengths of light.

The energy difference between an LED’s electrons and holes, called the bandgap, determines the wavelength of the emitted light. The wider the bandgap, the shorter the wavelength of light. The bandgap for bulk InN is quite narrow, only 0.6 electron volts (eV), so it produces infrared light. In Bayerl and Kioupakis’ simulated InN nanostructures, the calculated bandgap increased, leading to the prediction that green light would be produced with an energy of 2.3eV.

“If we can get green light by squeezing the electrons in this wire down to a nanometer, then we can get other colors by tailoring the width of the wire,” said Kioupakis. A wider wire should yield yellow, orange or red. A narrower wire, indigo or violet.

That bodes well for creating more natural-looking light from LEDs. By mixing red, green and blue LEDs engineers can fine tune white light to warmer, more pleasing hues. This “direct” method isn’t practical today because green LEDs are not as efficient as their blue and red counterparts. Instead, most white lighting today comes from blue LED light passed through a phosphor, a solution similar to fluorescent lighting and not a lot more efficient. Direct LED lights would not only be more efficient, but the color of light they produce could be dynamically tuned to suit the time of day or the task at hand.

Using pure InN, rather than layers of alloy nitride materials, would eliminate one ­­­­­factor that contributes to the inefficiency of green LEDs: nanoscale composition fluctuations in the alloys. These have been shown to significantly impact LED efficiency.

Also, using nanowires to make LEDs eliminates the “lattice mismatch” problem of layered devices. “When the two materials don’t have the same spacing between their atoms and you grow one over the other, it strains the structure, which moves the holes and electrons further apart, making them less likely to recombine and emit light,” said Kioupakis, who discovered this effect in previous research that also drew on NERSC resources. “In a nanowire made of a single material, you don’t have this mismatch and so you can get better efficiency,” he explained.

The researchers also suspect the nanowire’s strong quantum confinement contributes to efficiency by squeezing the holes and electrons closer together, a subject for future research. “Bringing the electrons and holes closer together in the nanostructure increases their mutual attraction and increases the probability that they will recombine and emit light.” Kioupakis said.

While this result points the way towards a promising avenue of exploration, the researchers emphasize that such small nanowires are difficult to synthesize. However, they suspect their findings can be generalized to other types of nanostructures, such as embedded InN nanocrystals, which have already been successfully synthesized in the few-nanometers range.

NERSC’s newest flagship supercomputer (named “Edison” in honor of American inventor Thomas Edison) was instrumental in their research, said Bayerl. The system’s thousands of compute cores and high memory-per-node allowed Bayerl to perform massively parallel calculations with many terabytes of data stored in RAM, which made the InN nanowire simulation feasible. “We also benefited greatly from the expert support of NERSC staff,” said Bayerl. Burlen Loring of the Computational Research Division and NERSC's Data and Analytics Group created visualizations for the study, including the journal’s cover image, using software from the portfolio of the Berkeley Lab-lead Scalable Data Management, Analysis and Visualization (SDAV) Institute. The researchers also used the open-source BerkeleyGW code, developed by NERSC’s Jack Deslippe.

This work was supported as part of the Center for Solar and Thermal Energy Conversion, an Energy Frontier Research Center funded by the U.S. Department of Energy Office of Science. DOE’s Office of Science is the single largest supporter of basic research in the physical sciences in the United States, and is working to address some of the most pressing challenges of our time. For more information, please visit science.energy.gov.