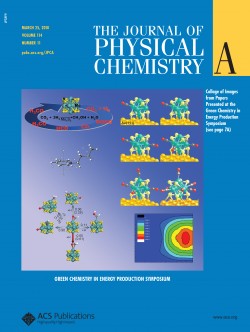 Figure 1. The top left, bottom left, and top right images illustrate aspects of methanol synthesis on a moly sulfide nanocluster. [The other two images are from different studies.] Carbon dioxide (CO2) emissions from fossil fuel combustion are major contributors to global warming. Since CO2 comes from fuel, why can't we recycle it back into fuel rather than releasing it into the atmosphere? Image © 2010 American Chemical Society..

An economical way to synthesize liquid fuel from CO2 would help mitigate global warming while reducing our need to burn fossil fuels. Catalysts that induce chemical reactions could be the key to recycling carbon dioxide, but they need to have just the right activity level—too much, and the wrong chemicals are produced; too little, and they don't do their job at all.

Recycling CO2 into alcohols such as methanol (CH3OH) or ethanol (C2H5OH) by adding hydrogen would be sustainable if the hydrogen were produced by a renewable technology such as solar-thermal water splitting, which separates the hydrogen and oxygen in water. But synthesizing fuel by CO2 hydrogenation requires a catalyst, and the most successful catalysts so far have been rhodium compounds. With a spot price averaging more than $4,000 per ounce over the last five years, rhodium is too expensive to be practical on a large scale.

Molybdenum ("moly") sulfide is a more affordable catalyst, and experiments have identified it as a possible candidate for CO2 hydrogenation; but bulk moly disulfide (MoS2) only produces methane. Other metals can be added to the catalyst to produce alcohols, but even then, the output is too low to make the process commercially viable.

Nanoparticles, however, often have higher catalytic activity than bulk chemicals. Designing moly sulfide nanoparticles optimized for alcohol synthesis would depend on finding answers to basic questions about the chemical reaction mechanisms. 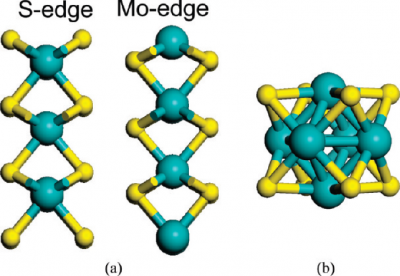 "This study might seem like pure research, but it has significant implications for real catalysis," Liu says. "If you can recycle CO2 and produce some useful fuels, that would be very significant. And that’s what DOE has always asked people to do, to find some new alternatives for future fuel that will eliminate the environmental footprint."Many of those questions were answered in a paper featured on the cover of the March 25, 2010 special issue of the Journal of Physical Chemistry A devoted to "Green Chemistry in Energy Production" (Figure 1). In this paper, Brookhaven National Laboratory (BNL) chemist Ping Liu, with collaborators YongMan Choi, Yixiong Yang, and Michael G. White from BNL and the State University of New York (SUNY) Stony Brook, used density functional theory (DFT) calculations conducted at BNL and NERSC to investigate methanol synthesis using a moly sulfide nanocluster (Mo6S8) as the catalyst instead of the bulk moly sulfide powder used in previous experiments.1

The reason bulk moly disulfide only produces methane (CH4) is, ironically, that it is too active a catalyst. "Catalysts are very tricky materials," Liu says. "You don't want it too active, which will break the CO bond and only form methane, an undesired product for liquid fuel production. If the catalyst is too inert, it can't dissociate CO2 or H2, and do the trick. So a good catalyst should have the right activity to do this catalysis."

From DFT calculations run using the VASP code on 16 to 32 cores of NERSC's Franklin system, Liu and colleagues discovered that the Mo6S8 nanocluster has catalytic properties very different from bulk MoS2. This is not surprising, given the different geometries of the molecules: the cluster has a more complex, cagelike structure (Figure 2). The cluster is not as reactive as the bulk—it cannot break the carbon–oxygen bond in CO2—and therefore it cannot produce methane. But, using a completely different reaction pathway (Figure 3), the cluster does have the ability to produce methanol. 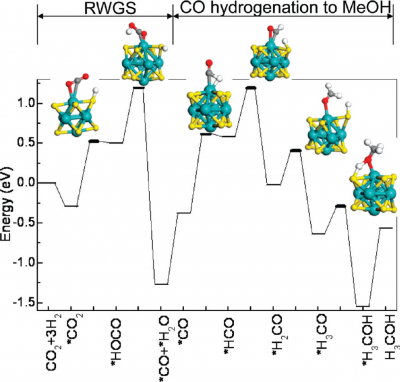 "In this case, the nanocluster is not as active as the bulk in terms of bonding; but it has higher activity, or you could say higher selectivity, to synthesize methanol from CO2 and H2," Liu explains. This detailed understanding is important for optimizing the catalyst's efficiency. For example, lowering the energy barrier in the CO to HCO reaction would allow increased production of methanol. Adding a C–C bond could result in synthesis of ethanol, which is usable in many existing engines. Both of these improvements might be achieved by adding another metal to the cluster, a possibility that Liu and her theorist colleagues are currently working on in collaboration with Mike White, an experimentalist.

The goal of catalyst research is to find a "Goldilocks" catalyst—one that does neither too much nor too little, but is "just right" for a particular application. By revealing why a specific catalyst enables a specific reaction, studies like this one provide the basic understanding needed to design the catalysts we need for sustainable energy production.