More Storms in Ancient Past May Have Implications for Future Climate

Scientists searching for clues to Earth’s future climate are turning to its dim past, the Pliocene epoch. “We’re interested in the Pliocene, because it’s the closest analog we have in the past for what could happen in our future,” says Chris Brierley, a Yale climate researcher computing at the National Energy Research Scientific Computing Center (NERSC).

Brierley and Yale colleague Alexey Fedorov are using simulations to help unravel a mystery that has bedeviled climatologists for years: Why was the Pliocene – under conditions similar to today – so much hotter? Their most recent work suggests that tropical cyclones (also called hurricanes or typhoons) may have played a crucial role.

Working with Kerry Emanuel of MIT, the Yale researchers’ computer simulations revealed twice as many tropical cyclones during the Pliocene; storms that lasted two to three days longer on average (compared to today); and, unlike today, cyclones occurring across the entire tropical Pacific Ocean. This wide-ranging distribution of storms disrupted a key ocean circulation pattern, warming seas and creating atmospheric conditions that encouraged more cyclones.

This positive feedback loop, they posit, is key to explaining the Pliocene’s higher temperatures and persistent El Niño-like conditions. Their findings, featured on the cover of the journal Nature1, could have implications for the planet’s future as global temperatures continue to rise due to climate change.

What’s the Pliocene Got to Do With It?

The Pliocene Epoch (the period between 5 and 3 million years ago) is especially interesting to climatologists because conditions then were similar to those of modern day Earth, including the size and position of land masses, the levels of sunlight, and, crucially, atmospheric concentrations of the greenhouse gas carbon dioxide (CO2). “In geological terms, it was basically the same,” Brierley says.

Yet, the Pliocene was puzzlingly hotter. Global mean temperatures ranged up to 4ºC (about 8ºF) higher than today, sea levels were 25 meters higher, and sea ice was all but absent. The poles heated up; yet, temperatures in the tropics didn’t exceed modern-day levels. And, the planet was locked into an El Niño-like state, as opposed to the modern on/off oscillation experienced today.

Fedorov and Brierley suspected cyclones played a role. “We knew from a previous study that additional vertical mixing [in the ocean] can cause warming in the Niño region,” of the eastern tropical Pacific, says Brierley. “Hurricanes were one of the few sources of mixing that we could envisage changing,” he explains.

To test their idea, the team first simulated atmospheric flows for modern Earth and for the Pliocene (see, “Powering Climate Models”). Because most other factors were basically the same, the main difference between the two was the Pliocene’s higher sea surface temperatures.

They then randomly seeded vortices and tracked the results. “We found there were twice as many tropical cyclones during this period, (versus modern times) and that they lasted longer,” two to three days longer on average, says Brierley. 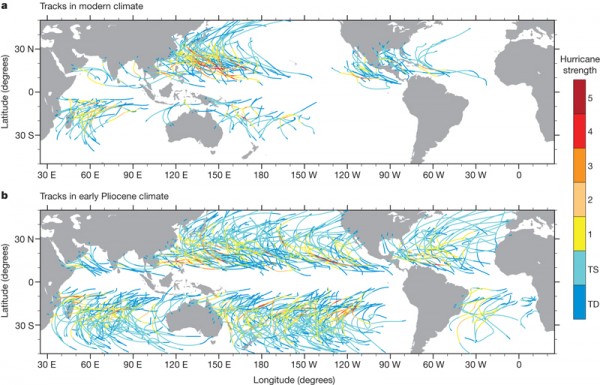 Hurricane paths shifted, too. “Rather than starting in the far western Pacific, hitting Japan, then heading back out into the northern Pacific, they were all over the place,” striking all along two bands north and south of the equator, says Brierley.

The next step was to integrate the extra ocean-churning action of all those hurricanes into a more complete climate model. To do that, the team applied an idealized pattern of hurricane ocean-mixing to a fully coupled climate model, one that includes ocean, sea ice, land cover and atmosphere.

Today, cold water originating off the coasts of California and Chile skirts the region of tropical cyclone activity on its way to the Equator, where surfaces in a “cold tongue” that stretches west off the coast of South America. El Niño events, which affect precipitation and temperature patterns worldwide, are characterized by an uptick in the temperature of the cold tongue. It only took about 50 model-years for the cold tongue to begin warming in the researchers’ Pliocene model. After 200 years, El Nino-like warming was persistent (figure 3). 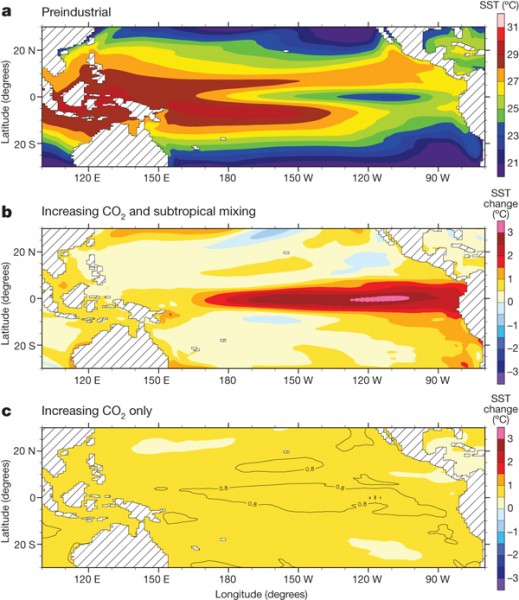 Figure 3. Sea surface temperature changes in the tropical Pacific as simulated by the coupled model are shown here. In the top frame is a baseline of temperatures using pre-industrial CO2 levels. The center frame shows the amount of warming (over baseline) under Pliocene CO2 levels with the water-churning effects of intense hurricane activity. The bottom frame shows the effects of higher CO2 levels alone. After 200 years of calculations, the Pliocene scenario (center) shows warming in the eastern equatorial Pacific is high, the signature of El Niño-like conditions.

Brierley, Fedorov and Emanuel suggest tropical cyclones were to blame, at least in part. More numerous and more widely distributed across the globe, the cyclones disrupted the cold tongue, raising ocean temperatures and leading to changes in the atmosphere that favored the formation of more tropical storms. The cycle repeated, helping to sustain the Pliocene’s higher overall temperatures.

“We’re suggesting that one of the reasons for the differences [between the Pliocene and today] is this feedback loop that isn’t operating in our present climate,” says Brierley.

The researchers don’t know if modern-day climate will eventually develop the same feedback loop, because they aren’t sure what set if off the first place. “There must have been a trigger, some sort of tipping point, but we don’t yet know what that may have been,” Brierley explains.

Fedorov cautions against drawing direct comparisons between our future climate and this past epoch. The current scientific consensus projects that the number of intense hurricanes will increase under global warming, but the overall number will actually fall, he says. “However, unless we understand the causes of these differences, we will not be sure whether our projections are correct,” explains Fedorov. “Changes in the frequency and distribution of these storms could be a significant component of future climate conditions.”

For their next step, the team is refining and rerunning their models at NERSC: “We’ve done all this assuming that you can average the behavior of hurricanes into one annual mean signal,” says Brierley. The team is working on more realistic hurricane mixing, “where you have a very strong forcing for a short amount of time followed by a long quiescence,” says Brierley. “We need to know if this makes a significant difference in our models.”

For this investigation, the team used 125,000 processor hours on Franklin, a Cray XT4, to run fully coupled climate models. “The current resources that we have locally achieve a rate of about three model-years-per-day, whereas Franklin can achieve around 25 years per day,” says Brierley. Models run on Franklin in just a month would have taken 6 months or more locally. “It’s not just the number and speed of individual processors, but the speed at which they can pass information,” that makes it feasible to run hundreds of years long simulations, Brierley says.

The team was also able to get their models up and running quickly because of Franklin’s pre-optimized, pre-installed climate modeling code. “I only had to set up the problem to do the science, rather than dealing with all the trouble of getting the code running first,” says Brierley.

Because of NERSC’s mass storage facility, HPSS, “I was able to store the vast amounts of data generated and then only take the fields I need at the time to a local machine to run visualization software,” Brierley says. Safely stored, the datasets can be used again in future rather than forcing scientists to repeat computationally expensive runs.