BERKELEY, CA — Researchers tackling some of the most challenging scientific problems, from improving energy efficiency in combustion devices to developing new particle accelerators for scientific discovery to studying properties of new materials, have been awarded access to supercomputing resources at the U.S. Department of Energy’s (DOE) National Energy Research Scientific Computing Center (NERSC). 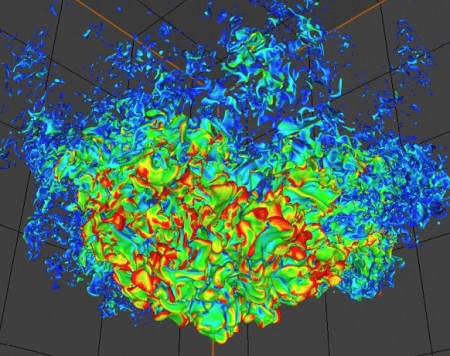 The awards, announced Dec. 16 by DOE’s Office of Science, are made under the Innovative and Novel Computational Impact on Theory and Experiment (INCITE) Program. In all, seven projects were awarded a total of 17,460,000 processor-hours after a competitive review. Launched in 2003, INCITE selects projects that not only require large-scale and intensive use of supercomputers but also promise to deliver a significant advance in science and engineering.

In addition to supporting the special INCITE projects, NERSC resources are also allocated by DOE to serve about 3,000 researchers at national laboratories and universities across the country. As the flagship computing facility for the DOE Office of Science, NERSC provided the only computing resources available during the first two years of the INCITE program.

As the original home of the INCITE program, NERSC staff are working to provide the necessary support for advancing these high-impact science projects while maintaining our commitment to all other users, whose work has broad impacts across all scientific disciplines,” said NERSC Division Director Katherine Yelick.

Secretary for Science Raymond L. Orbach, who launched INCITE in 2003. “From understanding the makeup of our universe to protecting the quality of life here on earth, the computational science now possible using DOE’s supercomputers touches all of our lives. By dedicating time on these supercomputers to carefully selected projects, we are advancing scientific research in ways we could barely envision 10 years ago, improving our national competitiveness.”

Here are descriptions of the seven INCITE projects awarded computing time at NERSC:

Eight Berkeley Lab researchers also will take part in three INCITE projects using resources at other DOE supercomputing centers. A Berkeley Lab team of Lin-Wang Wang, Juan Meza and Zhengji Zhao was awarded 3 million processor-hours on supercomputers at Argonne and Oak Ridge national laboratories to continue their award-winning  research into nanomaterials which could be used to make solar cells. Additionally, Ann Almgren, John Bell and Marc Day will participate in a project studying supernovae combustion, while David Bailey, Leonid Oliker and Kathy Yelick are members of a team studying methods to improve the effectiveness of supercomputers.

Details about each 2009 INCTE project can be found at http://www.sc.doe.gov/ascr/incite.

The Office of Science is the nation’s largest supporter of basic research in physical sciences. More information about the 2008 INCITE allocations can be found at http://www.sc.doe.gov/ascr/INCITE/index.html.

The NERSC Center is the flagship scientific computing facility for DOE’s Office of Science. Located at Lawrence Berkeley National Laboratory in Berkeley, Calif., NERSC enables interdisciplinary teams of scientists to address fundamental problems in science and engineering that require massive calculations and have broad scientific and economic impacts. Go to http://www.nersc.gov for more information.