The researchers used decades of data from ERA5, the European Center for Medium-range Weather Forecasts’ high-resolution Earth dataset, to train the FNO model, which was scaled up to 128 NVIDIA A100 GPUs on Perlmutter, the new HPC system at the National Energy Research Scientific Computing Center (NERSC). The team developed a global FNO weather forecasting model at 30-km resolution, an order of magnitude greater resolution than state-of-the-art deep learning Earth emulators. The model predicts wind velocities and pressures at multiple levels in the atmosphere up to 120 hours in advance with high fidelity. In a case study on the massive 2016 hurricane Matthew, the model’s predictions of the hurricane’s winds and track were within the uncertainties of the NOAA National Hurricane Center’s forecast cones. In addition, the model can predict the behavior of certain classes of extreme weather events across the globe days in advance in just 0.25 seconds on a single NVIDIA GPU.

The FNO model has been shown to predict the behavior of certain classes of extreme weather events days in advance in just 0.25 seconds on a single NVIDIA GPU.

Physics-informed deep learning models such as the FNO offer the potential for accurate predictions of the spatio-temporal evolution of the Earth system orders of magnitude faster than traditional numerical models. This is an ongoing effort, and the team is investigating the comparative accuracy of deep learning and traditional numerical weather models in collaboration with experts in atmospheric modeling and numerical weather prediction.

The FNO model developed through the Berkeley Lab/Caltech/NVIDIA collaboration is a significant step toward building a digital twin Earth, the researchers noted. Digital twin Earths are digital replicas of planet Earth -- simulators grounded in physics, driven by AI, and constrained by real-time data. As described in the ambitious 10-year EU project Destination Earth, a digital twin Earth will give both expert and non-expert users tailored access to high-quality information, services, models, forecasts, and visualizations in the realms of climate monitoring, modeling, mitigation, and adaptation. This video shows a demonstration of digital twin Earth using the FNO model. 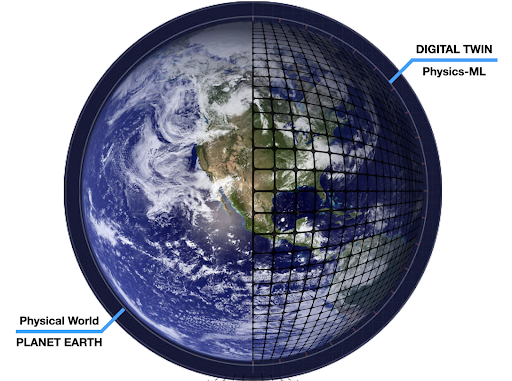 A depiction of digital twin Earth adapted from the EU's Destination Earth project.

The FNO climate collaboration was one of several science success stories described by NVIDIA co-founder and CEO Jensen Huang during a keynote presentation at the recent GPU Technology Conference. In his talk, Huang emphasized that the combination of accelerated computing, physics, machine learning, and giant computer systems can provide “a million-x leap” to enable simulating and predicting climate change reliably and accurately.

This project was led by Karthik Kashinath, a NERSC alumnus and affiliate who is now a machine learning scientist-technologist at NVIDIA, and Jaideep Pathak, a postdoctoral fellow in the NERSC Exascale Science Applications Program. Sanjeev Raja, an undergraduate summer intern with the Data and Analytics Services group at NERSC, also contributed to this research.

“It's great to see this important milestone in the development of sophisticated deep learning approaches toward transformative change in climate modeling,” said Wahid Bhimji, acting lead of NERSC’s Data, AI and Analytics Services group. “We are proud that NERSC’s AI early-science collaborations and the world-class AI compute infrastructure of Permutter can help drive this change."