This article is adapted from a Pacific Northwest National Laboratory news release.

At first glance, it’s difficult to imagine how melting ice in the Arctic sea could fuel wildfires in the Western United States.

But new research from Pacific Northwest National Laboratory (PNNL), presented Thursday, December 16 at the American Geophysical Union’s 2021 fall meeting in New Orleans, describes how climate conditions in one part of the world can, over time, influence climate outcomes thousands of kilometers away. Simulations run on the Cori supercomputer at the National Energy Research Scientific Computing Center (NERSC) at Lawrence Berkeley National Laboratory helped confirm this link. 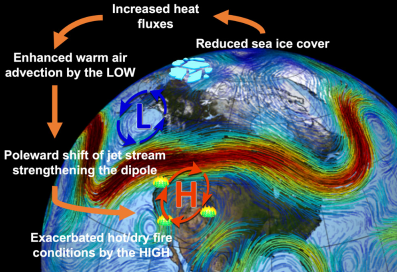 “In our study, we found the Arctic region and the Western U.S. are connected by this relationship,” said Hailong Wang, an earth scientist at PNNL and co-author of the study. “Regional land and sea surface warming caused by sea ice loss distantly triggers hotter and drier conditions in the west later in the year.”

To probe the influence of Arctic sea ice in forming fire-favorable climate conditions over western U.S., the study authors used four decades of recorded sea ice data to run a series of model experiments on Cori. This approach utilized RESFire, a region-specific ecosystem-feedback fire model developed as part of NCAR’s Community Earth System Model (CESM) to simulate observed burn patterns and trends and to understand fire-related climatic processes. Lead author and data scientist Yufei Zou, who was a postdoc at PNNL when the study was conducted, introduced some improvements to the RESFire model as part of his Ph.D. dissertation.

“Zou improved the online calculation of the fire emissions in terms of the mass and energy fluxes between the land and atmosphere models, as well as some fire effects on the climate and ecosystem such as vegetation mortality, regrowth, and associated land cover changes,” Wang said. For this particular project, he added, “we mostly tried to configure the CESM-RESFire model and optimize some of the model parameters and settings to help answer our science questions in a computationally efficient way.”

This kind of fine-tuning is critical because there are many variables and calculations in climate models, most of which cannot be excluded. “But there are some processes in the complexity of the model that you can simplify to address certain questions,” Wang said. For example, the research team was able to balance the computational efficiency and model accuracy of capturing key climate features by slightly adjusting the model resolution, which gave the research team more room to obtain better representation of physics and chemistry in the model.

A Tale of Two Vortices

The simulations run at NERSC — which utilized about 10 million computer hours over a two-year period — revealed that, as Arctic sea ice melts and the surrounding land and sea surfaces warm, a vortex forms in the atmosphere above the heated area. If a vortex has already formed, as is sometimes the case, the added heat from ice loss strengthens it. This vortex, spinning counterclockwise like a cyclone, is spawned by differences in air pressure.

As a result, the vortex constantly pushes the polar jet stream out of its typical pattern, diverting moist air away from the Western U.S. With the wavy jet stream nudged off its usual course, a second vortex, spinning clockwise, forms under the ridge of the polar jet above the Western U.S. This second vortex — similar to the vortex responsible for the Pacific Northwest’s extreme heat in the summer of 2021 — brings with it clear skies, dry conditions, and other fire-favorable weather.

“This dynamics-driven connection warms and dries out the Western U.S. region,” said Zou. “By uncovering the mechanism behind that teleconnection, we hope those in charge of managing forests and preparing for wildfire will be more informed.”

In addition to the simulations and data analyses performed at NERSC, the researchers also took advantage of data storage and other resources at the facility. “We used NERSC as a hub for some of the CMIP6 simulations and reanalysis data and as part of the climate model comparison hackathon, which many U.S. Department of Energy (DOE) scientists and collaborators had access to so they didn’t have to duplicate or download the common datasets to their own clusters,” Wang said.

The team now plans to expand its climate studies to explore Arctic sea ice change on other weather and climate extremes, such as drought and extreme cold. They’re also adapting their model codes to take advantage of GPU platforms, which should further speed their research and yield exciting new results.

“This study was part of our HiLAT-RASM project, a science focus area supported by the DOE’s  Regional & Global Analysis program that is investigating high-latitude environmental changes and how changes in the Arctic affect other global areas,” Wang said. “We plan to perform further studies in this area and will rely heavily on the DOE’s Energy Exascale Earth System (E3SM) model.”