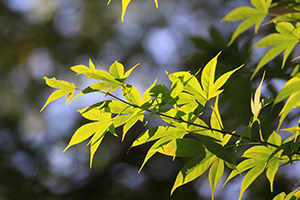 When bright green leaves start appearing and the scent of fragrant spring blossoms fills the air, we know the darker days of winter are behind us and the full bloom of spring is near. But every year this annual phenomenon has been arriving earlier in the season than in previous years. It turns out those blooms and leaves that are occurring earlier in the year are likely also responsible for contributing to warming air thousands of miles away to the north.

Decades of satellite data corroborate casual observation; the remote sensing data show a clear trend in earth’s earlier spring leaf growth and extended growing season compared to the past, and both are indicators of climate change. While scientists can observe and study these changes based on field observations, it is equally important to understand how the changes can be traced to the processes governing how changes influence larger ecosystems; scientists need to apply computational climate models on the world’s fastest supercomputers. A group of researchers, including two Berkeley Lab scientists, recently used supercomputers at the National Energy Research Scientific Computing Center (NERSC) to explore how early leaf growth, or “leaf-out,” affects the earth’s ecosystem. Their findings using system models show that early spring leaf-out is causing a definitive increase in annual surface warming in the Northern Hemisphere.

The study, published in Nature Climate Change, used the Community Earth System Model (CESM) to show that advanced leaf-out intensifies plant transpiration (the process of water movement through a plant and its evaporation from leaves, stems, and flowers), which then leads to air temperature anomalies in the Northern Hemisphere. The warming due to earlier leaf-out is largest in the Northern Hemisphere and likely due to declines of snow cover and extent.

“In this research, we were basically considering the energy budget of our ecosystem,” says Charles Koven, a scientist in Berkeley Lab’s Earth and Environmental Sciences (EESA) division, and a co-author on the Nature Climate Change paper. “There are some processes that cause the ecosystem to gain energy and therefore warm, others that cause it to lose energy and cool; we can do that calculation very easily.”

What was missing was how the ecosystem changes the atmospheric circulation, which then affects the ecosystem itself. “This is the kind of experiment that’s much harder to do,” says Koven. “We don’t have a simple expression for how these kinds of things affect the broader-scale climate, so this is where we need a climate model and supercomputing.”

The researchers used about two million core hours at NERSC to complete their study. “The great importance of the NERSC computing resource is that it allowed us to do these kind of isolated experiments to explore and quantify processes in the climate model,” says Koven.

Earth System Models already consider leaf-out as a function of temperature, but scientists hadn’t specifically isolated leaf and foliage growth in a controlled numerical experiment. “When we did that, we found that the feedbacks through the atmospheric circulation end up warming air temperatures in the Northern Hemisphere,” says Koven. “This research shows that we really need to take into account how plants respond to climate change.” Scientists also evaluated the role of direct vegetation radiant reflection and latent heat biophysical effects, which have been hypothesized to be important, and found that they have relatively small impacts.

NERSC’s familiarity and experience with the CESM model made the research easier, since very few adjustments needed to be made and NERSC staff had experience working with the system, says William Riley, another coauthor on the Nature Climate Change paper and a senior scientist in EESA.

Scientists are now working on building better foliage growth representations into the model and evaluating sources of uncertainty. “We really need to understand these processes of how plants respond to climate change more than we do now, because the effects of them are very strong,” adds Koven.