Cosmic microwave background (CMB) radiation is everywhere in the universe, but its frigid (-460° F), low-energy microwaves are invisible to the human eye. So cosmologists use specialized telescopes to map out the temperature spectrum of this relic radiation — left over from the Big Bang — to learn about the origin and structure of galaxy clusters and dark matter.

Gravity from distant galaxies cause tiny distortions in the CMB temperature maps, a process called gravitational lensing, which are detected by data analysis software run on supercomputers like the Cori system at Lawrence Berkeley National Laboratory’s (Berkeley Lab’s) National Energy Research Scientific Computing (NERSC) facility. Unfortunately, this temperature data is often corrupted by “foreground emissions” from extragalactic dust, gas, and other noise sources that are challenging to model.

“CMB images get distorted by gravitational lensing. This distortion is not a nuisance, it’s the signal we’re trying to measure,” said Emmanuel Schaan, a postdoctoral researcher in the Physics Division at Berkeley Lab. “However, various foreground emissions always contaminate CMB maps. These foregrounds are nuisances because they can mimic the effect of lensing and bias our lensing measurements. So we developed a method for analyzing CMB data that is largely immune to the foreground noise effects.” 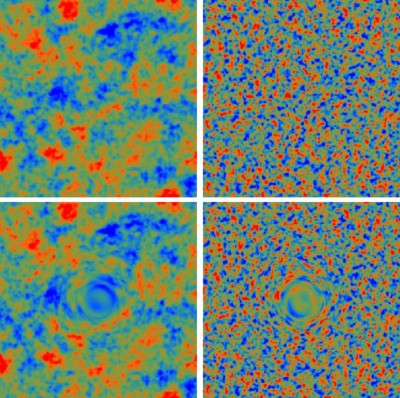 Schaan collaborated with Simone Ferraro, a Divisional Fellow in Berkeley Lab’s Physics Division, to develop their new statistical method, which is described in a paper published May 8, 2019 in Physical Review Letters.

“Our paper is mostly theoretical, but we also demonstrated that the method works on realistic simulations of the microwave sky previously generated by Neelima Sehgal and her collaborators,” Schaan said.

These publicly available simulations were originally generated using computing resources at the National Science Foundation’s TeraGrid project and Princeton University’s TIGRESS file system. Sehgal’s team ran N-body three-dimensional simulations of the gravitational evolution of dark matter in the universe, which they then converted into two-dimensional (2D) simulated maps of various components of the microwave sky at different frequencies — including 2D temperature maps of foreground emissions.

NERSC provided resources that weren't otherwise available to the team. Schaan and Ferraro applied their new analysis method on the existing 2D CMB temperature maps using NERSC. They wrote their analysis code in Python and used a library called pathos to run across multiple nodes in parallel. The final run that generated all the results were run on NERSC’s Cori supercomputer.

“As we progressively improved our analysis, we had to test the improved methods,” Schaan said. “Having access to NERSC was very useful for us.”

These 2D images show different types of foreground emissions that can interfere with CMB lensing measurements, as simulated by Neelima Sehgal and collaborators. From left to right: The cosmic infrared background, composed of intergalactic dust; radio point sources, or radio emission from other galaxies; the kinematic Sunyaev-Zel’dovich effect, a product of gas in other galaxies; and the thermal Sunyaev-Zel’dovich effect, which also relates to gas in other galaxies. Image: Emmanuel Schaan, Simone Ferraro/Berkeley Lab

The Berkeley Lab researchers did many of these preliminary runs on NERSC’s Edison supercomputer before it was decommissioned because the wait time for the Edison queue was much shorter than the Cori queues. Schaan said they haven’t yet optimized the code for the Cori many-core energy-efficient KNL nodes, but they need to do that soon.

It might be time to speed up that code given their future research plans. Schaan and Ferraro are still perfecting their analysis, so they may need to run an improved method on the same 2D CMB simulations using NERSC. They also hope to begin working with real CMB data.

“In the future, we want to apply our method to CMB data from Simons Observatory and CMB S4, two upcoming CMB experiments that will have data in a few years. For that data, the processing will very likely be done on NERSC,” Schaan said.