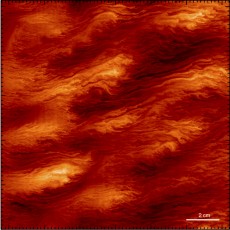 Visualization of temperature fluctuations from a high-resolution simulation of a plasma discharge in the DIII-D tokamak. The DIII-D plasma was designed to match many of the plasma parameters targeted in ITER operation. Image: Chris Holland

Decades of fusion research have brought many advances in our understanding of the physics of plasma, the hot ionized gas at the heart of a fusion reactor. While many questions are being answered, important challenges remain.

Take, for example, turbulence. It is generally accepted that the turbulent transport of particles, energy and momentum in a tokamak reactor plays a key role in determining the level of confinement and reactor performance. But a thorough understanding of plasma turbulence and the transport mechanism—and the ability to accurately predict each—is a bit more elusive.

In a fusion reaction, energy is released when two hydrogen isotopes are fused together to form a heavier nucleus, helium and a highly energetic free neutron. To achieve high enough reaction rates to make fusion a useful energy source, hydrogen contained inside the reactor core must be heated to extremely high temperatures—more than 100 million degrees Celsius—which transforms it into hot plasma. In certain reactors, strong magnetic fields are then used to “contain” the plasma and keep it from touching the vessel walls, a process known as magnetic confinement.

So there’s a lot going on inside the plasma as it heats up. Driven by electric and magnetic forces, charged particles swirl around and collide into one another, and the central temperature and density are constantly evolving. In addition, plasma instabilities—aka turbulence—disrupt the reactor’s ability to produce sustainable energy by increasing the rate of heat loss.

“In a fusion reactor, most of the heat generated in the plasma will be transported by the electrons,” said Chris Holland, a research scientist in the Center for Energy Research at UCSD and lead author on a recent study in Nuclear Fusion describing this work. This study builds on previous research by Holland and colleagues at MIT and General Atomics in which they used multiscale simulations to more precisely study the turbulence instabilities that cause plasma heat loss.

These latest simulations, which were performed with the GYRO gyrokinetic plasma turbulence code and used nearly 70 million hours of computing time on NERSC’s Edison system, corresponded to conditions measured in a plasma run at the DIII-D tokamak reactor using the ITER baseline scenario. The DIII-D tokamak, located at General Atomics, has been used since the 1980s to develop the techniques required to operate ITER and study their impact on reactor performance.

After examining the new multiscale simulations, the research team found that electron energy transport in these plasmas does appear to have a strong multiscale character—the first such evidence of the multiscale nature of electron transport for conditions like what is expected in ITER. The simulations showed that for these conditions, the electron transport will occur on a much larger range of scales (hence the term “multiscale”) than it does in many previous experiments, and that there are strong nonlinear couplings between the different scales that previous simulations could not resolve.

These results further extend our knowledge of what’s occurring inside current tokamak research experiments and in future experimental reactors such as ITER, which is expected to improve reactor design. In addition, the new simulations can be used as a direct predictive tool by fusion energy researchers to encapsulate the physics of plasma in a fusion reactor and produce reduced models for designing future reactors, Holland noted.

“It is vital to do these kinds of simulations to identify what phenomena to expect in a future reactor and how it may be different from current experiments,” he said. “But if you want to do an actual prediction of how an experiment like ITER is going to perform, you would have to do tens or hundreds of these simulations, which is still certainly beyond what we can do now. So it is important not just to do these simulations but to use them to understand the physics, produce models that are more computationally efficient and make integrated whole-device simulation predictions.”