In the quest for a radically better lithium-ion battery, a promising direction is the so-called “lithium-rich” cathode, in which the cathode contains a higher proportion of lithium than normal. While it has the potential to have far higher energy density, scientists have lacked a clear picture of the chemical processes, especially the role of oxygen.

Now researchers at the Department of Energy’s (DOE) Lawrence Berkeley National Laboratory (Berkeley Lab) report a major advance in understanding how oxygen oxidation creates extra capacity in such cathodes, opening the door to batteries with far higher energy density, meaning your phone or electric vehicle will be able to run for much longer between charges.

“The specific nature of our findings shows a clear and exciting path forward to create the next-generation cathode materials with substantially higher energy density then current cathode materials,” the researchers write in their study titled, “The structural and chemical origin of the oxygen redox activity in layered and cation-disordered Li-excess cathode materials,” published online in Nature Chemistry.

The research was led by Gerbrand Ceder of Berkeley Lab’s Materials Sciences Division. The lead authors were Dong-Hwa Seo and Jinhyuk Lee, and other co-authors were Alexander Urban, Rahul Malik, and ShinYoung Kang. Ceder also has an appointment at UC Berkeley’s Department of Materials Science and Engineering, and all the co-authors are also affiliated with the Massachusetts Institute of Technology (MIT), where some of the work was done. 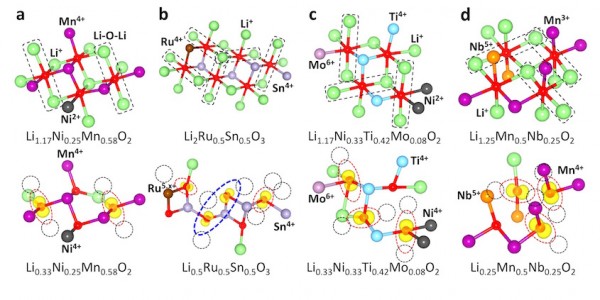 In a conventional lithium-ion battery, the cathode material is a lithium transition metal oxide, with the content of the lithium and the transition metal, such as nickel or cobalt, balanced. In a lithium-rich (also called lithium-excess) cathode, there is a higher proportion of lithium than the transition metal. Because transition metals are heavy and also expensive, reducing its content is a big benefit. The battery can be significantly cheaper and lighter, which are especially important factors for vehicle applications, where the battery is often one of the heaviest components of the vehicle.

“This is a very exciting direction being pursued by battery scientists,” Lee said. “It has been experimentally demonstrated many times that a lithium-excess cathode material can deliver higher energy density, about 50 percent higher than the current cathode materials in commercial lithium batteries.”

A major stumbling block has been that scientists had lacked a clear understanding of the chemistry in a lithium-rich cathode—specifically the role of oxygen. Normally when a battery is charged and discharged, the transition metal in the cathode oxidizes and releases electrons; those electrons then travel between the cathode and anode and create electricity.

“What we and others have been claiming recently is that you can take an electron off the oxygen and put it back, which is fairly radical. That’s the big idea for this cathode design,” Ceder said. “This paper specifically shows that it’s true and more importantly, shows under which conditions that it becomes true. ”

Ceder said he and other scientists have been speculating about oxygen’s role in the cathode for more than 15 years. “It was highly controversial,” he said. “We knew it was there. This study is a big conceptual breakthrough for us.”

Currently there are only three transition metals—cobalt, nickel, and manganese—used in most commercial cathodes. That limited choice constrains battery design. What’s more, their availability is limited. Demand for cobalt has been booming, and more than 45 percent of the world’s cobalt production now goes to lithium-ion batteries, Ceder noted.

“It’s not scalable,” he said. “If we’re ever to all drive electric vehicles, there’s no way a cobalt-only technology can make it.”

The research started two years ago after Ceder’s group discovered that a so-called “disordered” cathode structure, previously dismissed by battery designers, could indeed be workable. This prompted the group to look into how and when oxygen is active in lithium-excess cathodes, which are similar in structure to disordered cathodes.

The findings will allow scientists to approach battery design more rationally. “Now we understand how the oxygen is oxidized and how it competes with transition metals in oxidation,” Seo said. “We now know how to manipulate transition metal and oxygen oxidation to achieve higher energy density cathodes.”

It will also give them more options. “We can now use 15 or 20 different transition metals,” Ceder said. “We can use a much broader range of chemistry to look for cathodes, and we know exactly the kind of structures we want to engineer.”

The research was supported by DOE’s Office of Vehicle Technologies, the Robert Bosch Corporation, and Umicore Specialty Oxides and Chemicals.