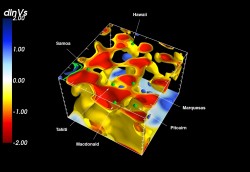 University of California, Berkeley, seismologists have produced for the first time a sharp, three-dimensional scan of Earth’s interior that conclusively connects plumes of hot rock rising through the mantle with surface hotspots that generate volcanic island chains like Hawaii, Samoa and Iceland.

Essentially a computed tomography, or CT scan, of Earth’s interior, the picture emerged from a supercomputer simulation run at NERSC.

While medical CTs employ X-rays to probe the body, the scientists mapped mantle plumes by analyzing the paths of seismic waves bouncing around Earth’s interior after 273 strong earthquakes that shook the globe over the past 20 years.

Previous attempts to image mantle plumes have detected pockets of hot rock rising in areas where plumes have been proposed, but it was unclear whether they were connected to volcanic hotspots at the surface or the roots of the plumes at the core mantle boundary 2,900 kilometers (1,800 miles) below the surface.

The new, high-resolution map of the mantle–the hot rock below Earth’s crust but above the planet’s iron core–not only shows these connections for many hotspots on the planet, but reveals that below about 1,000 kilometers the plumes are between 600 and 1,000 kilometers across, up to five times wider than geophysicists thought. The plumes are likely at least 400 degrees Celsius hotter than surrounding rock.

“No one has seen before these stark columnar objects that are contiguous all the way from the bottom of the mantle to the upper part of the mantle,” said first author Scott French, a computational scientist at NERSC who recently received his Ph.D. from UC Berkeley.

Senior author Barbara Romanowicz, a UC Berkeley professor of earth and planetary science, noted that the connections between the lower-mantle plumes and the volcanic hotspots are not direct because the tops of the plumes spread out like the delta of a river as they merge with the less viscous upper mantle rock.

“These columns are clearly separated in the lower mantle and they go all the way up to about 1,000 kilometers below the surface, but then they start to thin out in the upper part of the mantle, and they meander and deflect,” she said. “So while the tops of the plumes are associated with hotspot volcanoes, they are not always vertically under them.”

The new picture also shows that the bases of these plumes are anchored at the core-mantle boundary in two huge blobs of hot rock, each about 5000 kilometers in diameter, that are likely denser than surrounding rock. Romanowicz estimates that those two anchors–directly opposite one another under Africa and the Pacific Ocean–have been in the same spots for 250 million years.

French and Romanowicz, who also is affiliated with the Institut de Physique du Globe and the Collège de France in Paris, published their findings in the September 3, 2015 issue of the British journal Nature. 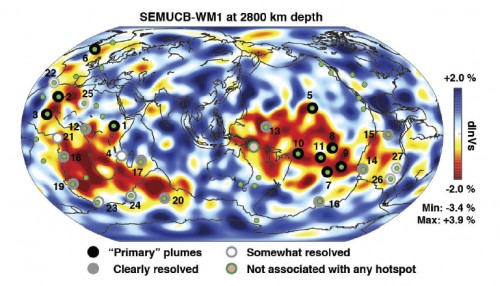 Most of the known volcanic hotspots are linked to plumes of hot rock (red) rising from two spots on the bondary between the metal core and rocky mantle 1,800 miles below Earth's surface.

The Earth is layered like an onion. An exterior crust contains the oceans and continents, while under the crust lies a thick mantle of hot but solid rock 2,900 kilometers thick. Below the mantle is the outer core, composed of liquid, molten iron and nickel, which envelopes an inner core of solid iron at the center of the planet.

Heated by the hot core, the rock in the mantle rises and falls like water gently simmering in a pan, though this convection occurs much more slowly. Seismologists proposed some 30 years ago that stationary plumes of hot rock in the mantle occasionally punched through the crust to produce volcanoes, which, as the crust moved, generated island chains such as the Galapagos, Cape Verde and Canary islands.

The Hawaiian Islands, for example, consist of 5 million-year-old Kauai to the west but increasingly younger islands to the east, because the Pacific Plate is moving westward. The newest eruption, Loihi, is still growing underwater east of the youngest island in the chain, Hawaii.

Until now, evidence for the plume and hotspot theory had been circumstantial, and some seismologists argued instead that hotspots are very shallow pools of hot rock feeding magma chambers under volcanoes.

Romanowicz, who uses seismic waves to study Earth’s interior, had previously worked with French, then a graduate student, on a tomographic model of the upper 800 kilometers of the mantle, which showed periodic hot and cold regions of rock underlying hotspot volcanoes. The new study completes that picture down to the core-mantle boundary.

She noted that if higher temperature alone were responsible for the rising plumes, they would be only 100-200 km wide, ballooning out only when they approach the surface. The fact that they appear to be five times wider in the lower mantle suggests that they also differ chemically from the surrounding cooler rock.

This supports models where the material in the plume is a mixture of normal mantle rock and primordial rock from the dense rock anchoring the plume at the core-mantle boundary. In fact, lava emerging from hotspot volcanoes is known to differ chemically and isotopically from lava from other volcanoes, such as those erupting at subduction zones where Earth’s crust dives into the upper mantle.

The supercomputer analysis did not detect plumes under all hotspot volcanoes, such as those in Yellowstone National Park. The plumes that feed them may be too thin to be detected given the computational limits of the global modeling technique, French said.

Millions of Hours of Computer Time

To create a high-resolution CT of Earth, French used very accurate numerical simulations of how seismic waves travel through the mantle, and compared their predictions to the ground motion actually measured by detectors around the globe. Earlier attempts by other researchers often approximated the physics of wave propagation and focused mainly on the arrival times of only certain types of seismic waves, such as the P (pressure) and S (shear) waves, which travel at different speeds. French used numerical simulations to compute all components of the seismic waves, such as their scattering and diffraction, and tweaked the model repeatedly to fit recorded data using a method similar to statistical regression. The final computation required 3 million CPU hours on NERSC’s supercomputers, though parallel computing shrank this to a couple of weeks.

These computations used a number of codes developed over the past two decades in the Romanowicz group, which have been progressively extended to solve ever larger tomographic problems. The greatest single consumer of CPU hours was a spectral finite element code for efficiently and accurately simulating wave propagation throughout the whole earth. Other codes were used to assemble and solve the large "regression" problems that underly seismic tomography. The latter also comprise one of the first production applications to use UPC++: a new partitioned global address space programming system developed by researchers in the DEGAS group at Berkeley Lab.

Romanowicz hopes eventually to obtain higher resolution supercomputer images of Earth’s interior, perhaps by zooming in on specific areas, such as that under the Pacific Ocean, or by using new data.

“Tomography is the most powerful method to get this information, but in the future it will be combined with very sensitive gravity measurements from satellites and maybe electromagnetic sounding, where people do conductivity measurements of the interior,” she said.