Scientists from the University of Illinois at Chicago have synthesized a catalyst that improves their system for converting waste carbon dioxide (CO₂) into syngas, a precursor of gasoline and other energy-rich products, bringing the process closer to commercial viability.

Amin Salehi-Khojin, UIC professor of mechanical and industrial engineering, and his coworkers developed a unique two-step catalytic process that uses molybdenum disulfide and an ionic liquid to transfer electrons to CO₂ in a chemical reaction. The new catalyst improves efficiency and lowers cost by replacing expensive metals like gold or silver in the reduction reaction.

The study was published July 30, 2014, in Nature Communications. 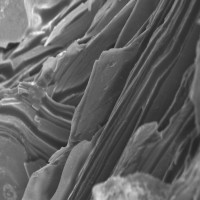 The discovery is a big step toward industrialization, said Mohammad Asadi, UIC graduate student and co-first author on the paper.

“With this catalyst, we can directly reduce CO₂ to syngas without the need for a secondary, expensive gasification process,” he said. In other chemical-reduction systems, the only reaction product is carbon monoxide. The new catalyst produces syngas, a mixture of carbon monoxide plus hydrogen.

Supercomputing resources at the U.S. Department of Energy’s National Energy Research Scientific Computing Center (NERSC) helped the research team confirm their experimental findings, according to Artem Baskin, a former PhD student at UIC who ran a series of density functions calculations (DFT) on NERSC’s Carver supercomputer for the study.

“This resource was indispensable for the whole project,” he said. “The DFT calculations helped to confirm what was expected from experiment (for example, lower work function), and also revealed new features, such as one-dimensional edge states and details of the EMIM-CO₂ complex formation that were not yet reported in the literature. Even though it is still an open question—how stable are one-dimensional metallic states if we take into account the electron correlation effects—the DFT calculations provided a valuable insight into the origin of catalytic activity of molybdenum disulfide edges.”

“This is a very generous material,” he said. “We are able to produce a very stable reaction that can go on for hours.”

Compared with other two-dimensional materials like graphene, “there is no need to play with the chemistry of molybdenum disulfide or insert any host materials to get catalytic activity,” added Bijandra Kumar, UIC post-doctoral fellow and co-first author of the paper.

“Fine-tuning of the edge structures is relatively simple,” he said. “We can easily grow the molybdenum disulfide with the edges vertically aligned to offer better catalytic performance.”

The proportion of carbon monoxide to hydrogen in the syngas produced in the reaction can also be easily manipulated using the new catalyst, according to Salehi-Khojin.

“Our whole purpose is to move from laboratory experiments to real-world applications,” he said. “This is a real breakthrough that can take a waste gas—CO₂—and use inexpensive catalysts to produce another source of energy at large-scale, while making a healthier environment.”

This article was adapted from a University of Illinois at Chicago news release.