In silicon, electrons attached to atoms in the crystal lattice can be mobilized into the conduction band by light or voltage. Berkeley scientists have taken snapshots of this very brief band-gap jump and timed it at 450 attoseconds. Image: Stephen Leone

The entire semiconductor industry, not to mention Silicon Valley, is built on the propensity of electrons in silicon to get kicked out of their atomic shells and start to move through the material. These mobile electrons are routed and switched through transistors, carrying the digital information that characterizes our age.

An international team of physicists and chemists at the University of California, Berkeley, has for the first time taken snapshots of this ephemeral event using attosecond pulses of soft x-ray light lasting only a few billionths of a billionth of a second. The researchers then used supercomputing resources at Lawrence Berkeley National Laboratory’s (Berkeley Lab) National Energy Research Scientific Computing Center (NERSC) to help them better understand their findings.

While earlier femtosecond lasers were unable to resolve the jump from the valence shell of the silicon atom across the band-gap into the conduction electron region, the new experiments now show that this transition takes less than 450 attoseconds.

“Though this excitation step is too fast for traditional experiments, our novel technique allowed us to record individual snapshots that can be composed into a ‘movie’ revealing the timing sequence of the process,” said Stephen Leone, UC Berkeley professor of chemistry and physics.

Leone, his UC Berkeley colleagues and collaborators from the Ludwig-Maximilians Universität, the University of Tsukuba and Berkeley Lab reported their achievement in the December 12 issue of Science.

More than a century has elapsed since the discovery that light can make certain materials conductive, according to Leone. The first movie of this transition follows the excitation of electronics across the band-gap in silicon with the help of attosecond extreme ultraviolet (XUV) spectroscopy, developed in the Leone and Neumark Attosecond Physics Laboratory.

In semiconducting materials, electrons are initially localized around the individual atoms forming the crystal and thus cannot move or contribute to electrical currents. When light hits these materials or a voltage is applied, some of the electrons absorb energy and get excited into mobile states in which the electrons can move through the material. The localized electrons take a “quantum jump” into the conduction band, tunneling through the barrier that normally keeps them bound to atoms.

These mobile electrons make the semiconductor material conductive so that an applied voltage results in a current flowing through. This behavior allows engineers to make silicon switches, known as transistors, which have become the basis of all digital electronics.

For this study, the researchers used attosecond XUV spectroscopy like an attosecond stop watch to follow the electron’s transition. They exposed a silicon crystal to ultrashort flashes of visible light emitted by a laser source. The subsequent illumination with x-ray-pulses of only a few tens of attoseconds (10-18 seconds) in duration allowed the researchers to take snapshots of the evolution of the excitation process triggered by the laser pulses. 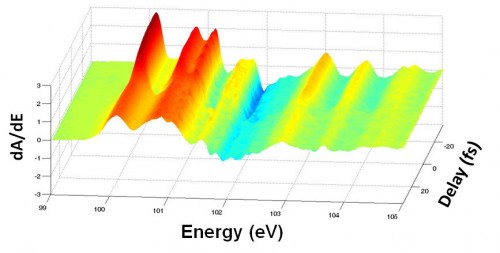 A computer simulation of the electron energies in a silicon crystal. From back to front, the atom-bound electrons have a very narrow, sharply peaked range of energies (red), but once the electrons jump to the conduction band, the energy distribution spreads out (orange and yellow). The jump takes only 450 attoseconds. Image: UC Berkeley

“The experiments were very novel, but the role of theory was primarily to explain the various physical mechanisms that led to specific features of interest observed in the experimental spectra,” explained co-author Das Pemmaraju, a project scientist in Berkeley Lab’s Chemical Sciences Division who ran the simulations. “The theoretical simulations help make sense of the experimental data and improve our understanding.”

The excitation of a semiconductor with light is traditionally conceived as a process involving two distinct events. First, the electrons absorb light and get excited. Afterwards, the lattice, composed of the individual atoms in the crystal, rearranges in response to this redistribution of electrons, turning part of the absorbed energy into heat carried by vibrational waves called phonons.

In analyzing their data, the team found clear indications that this hypothesis is true. They showed that initially, only the electrons react to the impinging light while the atomic lattice remains unaffected. Long after the excitation laser pulse has left the sample—some 60 femtoseconds later—they observed the onset of a collective movement of the atoms, that is, phonons. This is near the 64 femtosecond period of the fastest lattice vibrations.

Based on current theory, the researchers calculated that the lattice spacing rebounded about 6 picometers (10-12 meters) as a result of the electron jump, consistent with other estimates.

The unprecedented temporal resolution of this attosecond technology will allow scientists to resolve extremely brief electronic processes in solids that so far seemed too fast to be approached experimentally, says Martin Schultze, who was a guest researcher in Leone’s lab last year, visiting from the Ludwig-Maximilians Universität München. That imposes new challenges to the theory of light-matter interaction theory, including the excitation step and its timescale and the interpretation of experimental x-ray spectra.

“But here is also an advantage,” Schultze adds. “With our ultrashort excitation and probing pulses, the atoms in the crystal can be considered frozen during the interaction. That eases the theoretical treatment a lot.”