Complex oxides have long tantalized the materials science community for their promise in next-generation energy and information technologies. Complex oxide crystals combine oxygen atoms with assorted metals to produce unusual and very desirable properties. Because their electrons interact strongly with their environments, complex oxides are versatile, existing as insulators, metals, magnets and superconductors. They can tightly couple diverse physical properties, such as stress and strain, magnetism and magnetic order, electric field and polarization.

“In highly correlated electron systems, physical properties are interconnected like a tangle of strings,” said Albina Borisevich of the Department of Energy’s Oak Ridge National Laboratory. “You don’t always know what will happen when you pull on one string. Often one string takes others with it.”

Borisevich led a project that made a surprising discovery: intrinsic electric fields can drive oxygen diffusion at interfaces in engineered thin films made of complex oxides. The study was published August 17, 2014 in Nature Materials. 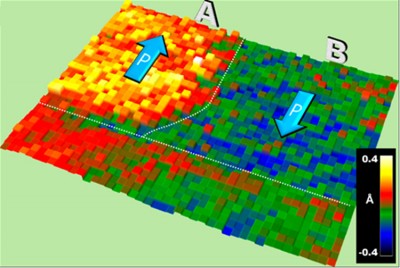 Increased understanding of the properties of complex oxides will improve the ability to predict and control materials for new energy technologies. Researchers can custom-build complex oxides to pull on specific strings by changing an oxide’s chemical composition or layering it with metals or insulators. These novel materials may exhibit magnetic, electrical and mechanical properties, alone or in combination, that enable feats not possible today, such as electric-field-based data storage that is more energy-efficient than today’s magnetic memory or more efficient fuel cells that alter the concentration of charged atoms, or ions, at sites of key chemical reactions.

The surprising discovery that intrinsic electric fields can drive oxygen diffusion at interfaces of complex oxides may serve as a basis for design of new electronic devices utilizing both electrons and ions.

The researchers, from Korea, Norway, Ukraine and the U.S., observed the effect in ferroelectrics, materials that exhibit switchable electrical polarization, or asymmetric distribution of positive and negative electrical charges. Ferroelectrics usually have regions, or domains, that can be as small as several nanometers, with different directions of polarization. Their properties are used in some memory devices, where domains with positive and negative polarization serve as “bits” that encode information. However, the longevity of these devices and the power required to “write” information is determined by what is happening at interfaces between the positively or negatively polarized ferroelectric domains and their metallic substrates.

The researchers examined metalferroelectric interfaces for positively and negatively polarized domains. Their major finding was that, depending on the charge, either purely electrical or combined electrical and chemical phenomena were at play. When a ferroelectric is joined with another material, polarization causes charges to accumulate at the interface. This excess charge is called “polarization charge.” The collaborators found that the interface of the ferroelectric material behaved differently depending on the sign of the polarization charge (positive or negative)

At the interface with positive polarization charge, negatively charged electrons were syphoned in from the metal to attenuate it. Surprisingly, for negative polarization charge, the opposite did not happen—that is, electrons were not pushed out of the interface region. Instead, negatively charged oxygen ions left, creating defects called oxygen vacancies.

“With the change of polarization charge, not only the sign but the physical nature of the compensating chemical species changes,” said Borisevich, who works in ORNL’s Materials Science and Technology Division. “Charge compensation by oxygen vacancies highlights the important role of ionic phenomena in oxide electronics and opens a pathway for new device concepts.” For example, someday engineers may design devices in which ions manipulate electrical response or vice versa.

On a substrate of strontium titanate (SrTiO3), the researchers layered a metallic oxide called lanthanum strontium manganite, or (La0.67Sr0.33)MnO3 (LSMO), an electrical contact providing a reservoir of electrons. Atop the metal layers they added layers of an insulator, a ferroelectric material called bismuth ferrite, or BiFeO3 (BFO).

Second, electron energy-loss spectroscopy, which provides chemical information, indicated sites of oxygen-atom depletion and oxidation-state changes of iron and manganese metals. This tool allowed the researchers to track the decrease in oxygen concentration occurring at the interface with negative polarization charge. It also demonstrated that the valence state, which gives an atom power to combine with other atoms, was different in the metal manganese at the two different interfaces. The experimental observations coupled with theoretical results built a strong case for oxygen vacancy compensation of charge for the side of the material with negative polarization and electronic compensation for the positive side.

The research team used NERSC's Hopper supercomputer to carry out first-principles density functional theory calculations and confirm that oxygen vacancies in BFO indeed resulted in lattice expansion. The theoretical results thus supported the presence of ionic compensation for the negative-interface polarization charge, as suggested by the STEM/EELS experiments.

The exact nature of the compensating species at ferroelectric interfaces can have a significant effect on switching behavior because not only electrons but also ions need to move at the interface when the polarization charge is switched. The study therefore suggests a promising role for electrochemical phenomena at oxide interfaces, opening possibilities for fine-tuning switching by engineering local oxygen concentration.

“In the future, we want to move beyond tracking different aspects of interface properties at the atomic scale and toward coming up with a desired static and/or dynamic behavior and then making it happen at the intersection of electronic and chemical/electrochemical phenomena characteristic of these systems,” Borisevich said.

In a related study published earlier this year in NanoLetters, Borisevich's team discovered that missing atoms cause metals to align and polarize materials. They built a highly ordered lattice by layering thin films containing lanthanum, strontium, oxygen and iron. Although each layer had an intrinsically nonpolar (symmetric) distribution of electrical charges, the lattice had an asymmetric distribution of charges. The charge asymmetry creates an extra “switch” that brings new functionalities to materials when “flipped” by external stimuli such as electric fields or mechanical strain. This makes polar materials useful for devices such as sensors and actuators.

The study’s biggest surprise, however, was how material defects induced the polar behavior. Defects are often detrimental to material properties, but these findings show they can provide a new mechanism for manipulating electricity, magnetism and other behaviors important for energy and information technologies.

For this study, the researchers used the Hopper and Edison supercomputers at NERSC to run theoretical calculations of the forces and energies between up to 120 atoms at a time.

This article was adapted from materials provided by ORNL.