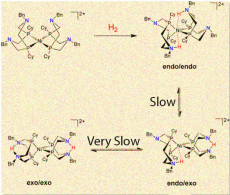 While one configuration (endo/endo) of a popular nickel catalyst can produce thousands of hydrogen molecules a second, the other forms that place the proton farther from the center are slower and less efficient.

Chemical reactions facilitated by catalysts are crucial to many industrial processes. In fertilizer production, chemical companies combine copious amounts of molecular hydrogen with nitrogen to produce ammonia—a process that currently consumes about one percent of the world’s energy. To produce higher-octane gasoline, petroleum companies will remove hydrogen from hydrocarbon molecules during the refining process. And, molecular hydrogen is also used to store electrical energy generated by renewable sources like sun and wind.

Although many catalysts used in industry work just fine, researchers at the Pacific Northwest National Laboratory (PNNL) want to help them reach their full potential. So in a recent study, they’ve combined supercomputing simulations and laboratory experiments to capture, at an atomic-scale, the reactions that occur when a well-known nickel-based electrocatalyst dissolves into a liquid, which has been bubbled with hydrogen gas. The catalyst used in this study pulls hydrogen molecules apart.

"The catalyst we studied is the fastest of its type with hydrogen, but it still isn't fast enough to put in a fuel cell and drive down the road," says Wendy Shaw, a biophysical chemist at PNNL. “To get the catalysts to achieve their full potential, we need to understand all of the bottlenecks and how to overcome them.”

In a recent issue of the Journal of the American Chemical Society, the team reported that proton delivery or removal determines if the nickel-based catalyst take a highly productive form or twists into a less useful structure. The scientists found that the most productive catalytic structure has key nitrogen-hydrogen bonds close to the nickel center. In this form, called endo/endo, the reaction occurs in a fraction of a second. If the catalyst is in any other form, the reaction takes days to complete.

“When we started on the research, there was the belief that breaking or forming hydrogen was the crucial step—it isn’t,” says Simone Raugei, a theoretician at PNNL. “It is putting the protons in the right spot on the catalyst. Once you have them in the right spot, everything goes very quickly.”

Proton Delivery and Removal Can Speed or Distract Common Catalyst

At an atomic-level, the nickel-based catalyst used in this study has four “floppy arms,” calledligands, around the nickel center. These ligands twist into three distinctive isomers, which are essentially different arrangements of the same atoms. The team set out to see how protons move on the ligands of all three isomers.

“Once we realized that H2 breaking and forming step were not rate determining, we started focusing on proton delivery to and from the catalyst. We ran large-scale ab-initio molecular dynamics simulations on Department of Energy supercomputers to shed some light into this process,” says Raugei.  “We are one of the few groups to do this kind of simulation on massively parallel computers. These calculations are computationally expensive, but they allow us to capture the full complexity of the system and match experimental conditions as much as possible.”

Using supercomputers, the theoreticians identified barriers that kept the catalyst in less-productive isomeric forms. By combining these results with NMR Spectroscopy (Nuclear Magnetic Resonance Spectrometry) observations of the three different isomers, the team found that initially protons preferred to be positioned away from the nickel. Getting them from this place to a position near the nickel center takes several chemical steps, requiring energy and slowing down the catalyst. They also found that it is difficult to remove protons when they are next to nickel.

"Proton delivery is key to catalysis. If you want to improve these and other catalytic platforms, you have to improve proton delivery," said Raugei. “This is a very complicated catalytic environment, and achieved this level of understanding by following the full chemistry of the system and comparing with the laboratory experiments. This work is a prime example of how theory and simulation can help us gain greater insights into chemistry, and guide new chemistry research.”

This story was adapted from a PNNL research highlight.