Research may clarify the effectiveness of regional pollution controls 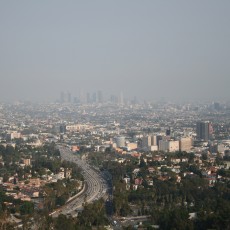 Aerosols are microscopic particles—like dust, pollen and soot—that ubiquitously float around in our atmosphere. Despite their tiny stature, these particles can have a huge impact on human health, climate and the environment. So scientists from the Pacific Northwest National Laboratory (PNNL), Colorado State University and the California Air Resources Board have set out to characterize the roles of various particles as atmospheric change agents on a regional scale.

For the first time ever, these researchers have characterized the relative, direct influence of different aerosol species on seasonal atmospheric warming and cooling over California using supercomputers at the Department of Energy’s National Energy Research Scientific Computing Center (NERSC) and at PNNL. The scientists found that aerosols have a net cooling effect on California’s atmosphere, but individual species contribute differently. While sulfates contributed the most to cooling, black carbon particles, or soot, were responsible for up to 95 percent of countervailing warming.

“With a better understanding of how each particle affects the atmosphere, we can assess the success of regional emissions controls of anthropogenic, or human-caused particles,” says Chun Zhao, a PNNL climate scientist and lead author of a paper published the Journal of Geophysical Research.

Earth’s climate is driven by radiation provided by the sun, but not all of it reaches our planet’s surface. A quarter of this energy is actually reflected back into space by aerosols laced in clouds, or floating around in the atmosphere. This effect leads to atmospheric cooling. However, some aerosols can cause atmospheric warming by absorbing solar radiation. Because aerosols comprise such a broad collection of particles, with vastly different properties, the degree to which each absorbs or deflects energy varies.

Because aerosols are not evenly distributed around the planet, their effects are felt primarily on a regional scale. And unlike greenhouse gases that linger in the atmosphere for a long-time—months to millennia—aerosols only stay in the atmosphere for one or two weeks.  This means that humans could potentially impact regional climate relatively quickly with aerosol emission control policies. So the goal of this particular study was to perform a baseline assessment of aerosols and their radiative forcing over California. The next step will be to model how regional emission controls impact the regional water cycle, as well as cloud formation and behavior. Radiative forcing is the difference between the radiant energy received by earth and the energy radiated back to space.

According to Zhao, California is an interesting case study because it is one of the most polluted regions on Earth, but with one of the most effective pollution control programs in the world. He notes that the state’s increasingly stringent emission standards for diesel engines and reformulated low-sulfur diesel fuels have led to a 50 percent decrease in black carbon between 1989 and 2008. The regional effects of this decrease, however, remain unclear.

“To see whether our emission control policies are making a difference on air quality and regional climate, and to make informed policy recommendations for the future, we need to understand the seasonal variation and movement of aerosols over California,” says Zhao. “Furthermore, accurate calculation of aerosol direct radiative forcing is also crucial for simulations of the regional hydrological cycle and climate.”

Zhao and his colleagues applied the Weather Research and Forecasting model with coupled chemistry (WRF-Chem) to the atmosphere above California to simulate the amount of warming or cooling caused by each particle species by season, as well as its distribution in the atmosphere.

Using NERSC’s Hopper system, the team was able to run the WRF-Chem simulations for California at relatively high resolution (12 kilometers horizontally). These runs showed that combined aerosols of all species had an overall cooling effect at the top of atmosphere through all seasons in California, and that sulfates were the largest contributors to cooling in summer and winter. They also found that dust and carbon-containing aerosols were the largest contributors to warming among aerosol species. The researchers corroborated their model simulations with various datasets of meteorological and aerosol field measurements taken during 2005 and 2008.

Because the state of California has such complex topography—with small communities and large urban areas nestled in valleys along the coast and atop mountains—and aerosols are not distributed evenly across all regions, high-resolution models are needed to accurately resolve the regional distribution and atmospheric effects of these particles. According to Zhao, this is where NERSC resources came in handy.

“When you are developing a model, as we were, you need to run many simulations before you get the correct result,” says Zhao. “Because we were running models at relatively high 12 kilometer horizontal resolution, over a large piece of land with complex topography, we needed a lot of processing power, and we got that with NERSC’s Hopper system.”