Hollow magnetic cage molecules may have applications in technology, healthcare

NERSC supercomputing resources helped Virginia Commonwealth University (VCU) researchers determine it may be possible to create large, hollow magnetic cage molecules that could be used in medicine as a drug delivery system to noninvasively treat tumors and in other emerging technologies.

About 25 years ago, scientists discovered the C60 fullerene—better known as the Buckminster Fullerene—a molecule composed of 60 carbon atoms that formed a hollow cage. Due to its unique structure the molecule offers serious technological potential because it could hold other atoms or small molecules inside. 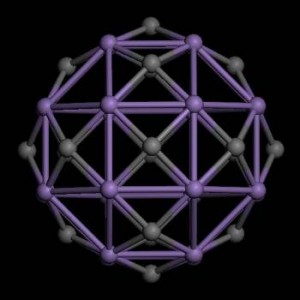 Illustration of a Mn24C18 cluster carrying a magnetic moment of 70 Bohr magnetons, which was featured on the July 28, 2013 cover of The Journal of Chemical Physics. (Menghao Wu)

That potential has since spurred worldwide interest among scientists who have been searching for similar molecules. Although some hollow cage structures have been found, none are magnetic. Magnetic properties of the structure are of particular interest because the cage carrying an embedded atom or molecule can be guided by an external magnetic field and may serve as an effective vehicle for targeted drug delivery.

In a study that appeared as the cover story in the July 28, 2013, The Journal of Chemical Physics, two VCU scientists showed that magnetic hollow cages larger than the original C60fullerene that carry giant magnetic moments are possible. A magnetic moment refers to the measure of the magnetic strength of a cluster.

“The potential benefit of this finding is that it provides a route to the synthesis of molecular magnets with colossal magnetic moments,” said co-lead investigator Puru Jena, distinguished professor of physics in the VCU College of Humanities and Sciences. Jena collaborated with Menghao Wu, co-author of the paper and a postdoctoral scholar in the VCU Department of Physics.

Using density functional theory and NERSC’s Carver IBM iDataPlex system, the researchers theorized that metal-based hollow cages can be formed and, depending on their composition, some of them can even carry very large magnetic moments. “The space inside some of these hollow cage clusters is large enough to accommodate additional atoms or molecules, raising the possibility that they may have technological applications,” they wrote.

“These molecules can be used for targeted non-invasive drug delivery. When assembled, the molecules can also form new high strength magnets for device application,” Jena said.

However, the team is still early in its discovery process, he emphasized.

“There is a long way to go. Experiments first have to be carried out to prove the predictions of our theory,” said Jena. “Ways must be found to synthesize large quantities of these molecules and study their magnetic properties once they are assembled. Finally, these molecules need to be functionalized by embedding desired atoms/molecules for practical applications.”