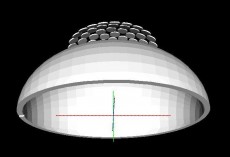 The array transducer in position above the calvaria (skull). Shown are the ends of the array elements above the computational model of the skull.

Researchers are using computer simulations to investigate how ultrasound and tiny bubbles injected into the bloodstream might break up blood clots, limiting the damage caused by a stroke in its first hours.

Strokes are the most common cause of long-term disability in the United States and the third most common cause of death. More than 795,000 Americans suffer a stroke every year, which happens when a clot blocks an artery or blood vessel and restricts blood flow to the brain. The longer the clot stays intact, the more brain tissue dies, the higher the chance of severe damage, and the lower a victim’s chance of survival.

Now, researchers from the Universities of California at Berkeley (UC Berkeley) and San Diego (UCSD) suspect these clots could be broken up—without surgery or drugs—using a combination of microbubbles and high intensity focused ultrasound (HIFU). The team used supercomputers at the Department of Energy’s National Energy Research Scientific Computing Center (NERSC) to figure out how this might work. Their findings were published in Journal of the Acoustical Society of America.

“One day, HIFU could be a useful medical treatment for people who are stroke victims. But before this can happen, we need to establish some fundamental background work, which includes understanding how HIFU accelerates damage to a clot when bubbles are present,” says Andrew Szeri, Professor of Mechanical Engineering at UC Berkeley and co-author of the paper.

According to Szeri, the team’s NERSC allocation was incredibly valuable because it allowed them to generate the preliminary data needed to write a research proposal for funding in a new area. “Without some kind of preliminary data, it’s a non-starter; there’s just no way for us to find funding,” Szeri adds. 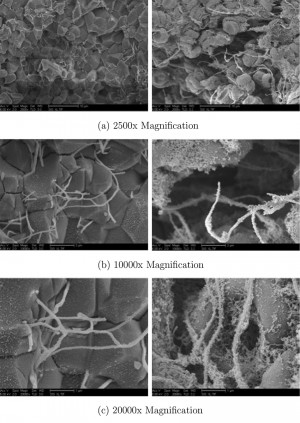 Scanning electron micrograph of a human citrate blood clot before HIFU treatment (left column) and after HIFU treatment (right column). The images on the left show a dense fibrin fiber network with numerous cells incorporated into the matrix prior to HIFU exposure. As seen in subfigure (a), right, there is clearly damage to the fibrin network of the blood clot as well as lysis of red blood cells.

Aside from surgery, a drug called tissue plasminogen activator (tPA) is currently the only federally approved treatment for stroke-causing blood clots. But it is estimated that less than five percent of all patients transported to emergency rooms actually receive the clot-dissolving drug. For safety reasons, it can only be administered to some patients and then only within four-and-a-half hours of the initial stroke.

In the early 1990s, researchers noticed that ultrasound scans seemed to enhance the effectiveness of drugs like tPA, but nobody knew why. A clinical trial in 2004 confirmed that obstructed blood vessels cleared more quickly when ultrasound was administered in combination with tPA. In the years after, many researchers built on this result by trying to figure out how to administer ultrasound to maximize the clot-busting effectiveness of tPA.

“These experiments never made too much sense to me. With or without ultrasound, tPA is only available to about 3 percent of all stroke victims worldwide. So, regardless of how successful this approach is 97 percent of the population will not benefit from it,” says Thilo Hoelscher, Director of UC San Diego’s Brain Ultrasound Research Laboratory and co-author on the paper. “We are looking for a safe treatment for stroke patients who cannot receive tPA.”

Because artificial microbubbles are already widely used as contrasting agents, Hoelscher suspected they could be safely used in combination with HIFU to dissolve blood clots. Ultrathin shells of fat molecules filled with gas, these artificial bubbles are about one-eighth of the size of red blood cells. Once injected into the bloodstream, they only last a few minutes in the blood pool. The gas is exhaled and the fat molecules are metabolized in the liver or the spleen.

“Imagine these microbubbles as ping pong balls in the bloodstream,” says Hoelscher. “The bubble compresses when the ultrasound wave hits it and then decompresses as the wave passes. This positive and negative pressure causes the microbubble to oscillate, which amplifies the signal going back to the ultrasound machine.”

This oscillation is what makes microbubbles great contrasting agents for ultrasound. Now, imagine a microbubble sitting atop or inside a blood clot—which is essentially a just tangled network of fibrin fibers that becomes dense as blood cells stick to them. Jolt the microbubble with HIFU and researchers predict the resulting oscillation might be used to loosen or even break up the clot. To test their hypothesis, Hoelscher’s team set up laboratory experiments where they planted an artificial blood clot inside a test tube and injected microbubbles into the tube. Then, they placed the tube under a cadaver skull and applied HIFU to see if the clot would dissolve.

“Our experimental setup essentially confirmed that we could break up blood clots using microbubbles and HIFU. What we don’t know is how to apply the HIFU—or how much to apply—to get the bubbles to oscillate or even burst the way we need them to,” says Hoelscher. “This is where the computer models and Andrew Szeri’s team at UC Berkeley come in. We need a ‘standard recipe’ that says if the skull is this thick, we apply this much HIFU and in this way.”

Instantaneous pressure distribution in a 2D slice of the 3D computational domain. Contours vary from -0.51 to 0.51 MPa. Geometrical focus is at the bottom tip of the line running along the central ordinate of the plot. The pressure variation due to the change in density of the skull model used is evident at the focus. This has consequences for the violent collapses of cavitation bubbles, which are hypothesized to contribute mechanical damage to the clot.

Today, many researchers are investigating the effectiveness of HIFU for tissue ablation, the selective destruction of body tissues. Research is currently underway to evaluate its effectiveness for treating cancers of the brain, breast, liver, bone and prostate. In fact, a team of researchers at the University of Tokyo initially developed the HIFU simulator code used in this study to understand tissue ablation.

Szeri and his colleagues at UC Berkeley actually adapted this code to look at the effect of HIFU on blood clots, and ran their simulations on NERSC’s supercomputers. The models allowed researchers to adjust variables, like skull density, and assess whether these changes created potentially dangerous pressure fields inside the skull.

“Think of a Perrier bottle. When you open the top, the clear liquid is suddenly filled with bubbles that float up and out of the bottle,” says Szeri. “Why does this happen? It’s because you reduce the pressure when you open the bottle, this causes gas to come out of the solution and then bubbles emerge.”

According to Szeri, similar pressure fields are created when HIFU transducers are aimed at the skull. If pressures are low enough, microbubbles will form naturally. This presents a potential safety issue because these bubbles cannot be controlled, and can rupture small blood vessels.

“Whenever we talk about ultrasound and the human body, our number one concern is always safety. Our goal is to keep the ultrasound energy as low as possible,” says Hoelscher. “The supercomputer simulations verified that it is feasible to bust blood clots with relatively low energy, which is important because when the energy is not appropriate bubbles will form.”

With new funding, Szeri notes that the collaboration will try to make a much closer connection between the theory (as shown in computer models) of how bubbles damage blood clots, and the experimental observations that show how clots are damaged. They hope to use scanning tunneling microscopes to investigate the detail of clot damage from bubbles, and then refine their models based on these observations.