Developed in a collaboration between computational scientists at Lawrence Berkeley National Laboratory (Berkeley Lab), and climate scientists at  the Los Alamos National Laboratory and the University of Bristol, BISICLES allows researchers to model regions of interest—like the retreating edge of an ice-sheet—at sub-kilometer resolution, while employing computationally cheaper coarser resolution in areas that don’t need such fine detail. This allows an accurate, high-resolution view of processes like glacier surges, ice streams, and grounding-line migration, at a relatively low computational cost.

This video shows one possible scenario for Antarctica’s rapidly changing Amundsen Sea Embayment at two different model resolutions over a period of 218 years (from 1982 to 2200). In all three clips, the grounding line—where ice flowing into the sea separates from the bedrock and begins to float—is shown as a red line, and the speed of the flowing ice is depicted by brown coloring (the darker the brown, the faster the ice is flowing).

“When you watch these simulations side-by-side it is apparent that you need very fine resolution, better than one kilometer, to accurately simulate ice streams and grounding line migration,” says Dan Martin, a Berkeley Lab computational scientist who helped develop BISICLES. Martin and his collaborators generated the simulations using the BISICLES code and up to 800 processor cores on the National Energy Research Scientific Computing Center’s (NERSC’s) Hopper system.

Martin worked with Gunther Weber of Berkeley Lab’s Visualization Group to create this movie with VisIt from simulations generated by the University of Bristol researchers, Payne and Cornford. VisIt is a free interactive tool for visualizing scientific data. Weber's contribution to this project is supported by the Scalable Data Management, Analysis and Visualization (SDAV) project, which is funded by the Department of Energy's Scientific Discovery Through Advanced Computing (SciDAC) program. 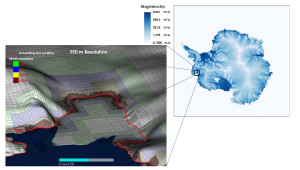 A simulation of the retreating Amundsen Sea Embayment with AMR. Green identifies regions that are modeled at 2km resolution, blue represents 1km, yellow is 500 meters and brown is 250 meters. The grounding line is shown as a red line. Credit: Antony Payne and Stephen Cornford, University of Bristol.

As a part of this program, computational scientists at Berkeley Lab (Dan Martin, Esmond Ng, Sam Williams, and Woo-Sun Yang) formed a collaboration with climate scientists at the Los Alamos National Laboratory (William Lipscomb) and the University of Bristol (Stephen Cornford and Tony Payne), which led to the development of a code called Berkeley-ISICLES (BISICLES).

Developed by the Berkeley Lab’s Applied Numerical Algorithms Group, the Chombo software framework is funded in part by the SciDAC FASTMath (Frameworks, Algorithms, and Scalable Technologies for Mathematics) Institute.

Why Should I Care?

The Amundsen Sea Embayment is a Texas-sized region at the edge of the West Antarctic Ice Sheet. Satellite and ground observations show that the ice in this region is thinning and retreating significantly as shifting wind patterns and ocean currents allow warmer water to flow into the icy bay.

Every year, an ice stream called the Pine Island Glacier (region in the top left of this simulation) carries approximately 100 cubic kilometers of ice (enough to fill the San Francisco Bay to the level of the Golden Gate Bridge roadway) from the West Antarctic Ice Sheet, through this embayment, to the Amundsen Sea. Unlike the majority of West Antarctic ice streams, the Pine Island Glacier is not protected from the ocean by large floating ice shelves. And, because the base of this glacier is below sea level and slopes downward inland, there is no topographical barrier to stop a retreat of the ice once it has started.

Pine Island Glacier and Thwaites Glacier (region in the bottom right of this simulation) are two of Antarctica’s largest ice streams, and their flows have increased in recent years. If these glaciers were to melt completely, global sea levels would rise by about 30 centimeters (approximately 1 foot). Their collapse could in turn destabilize the remainder of the West Antarctic Ice Sheet, resulting in 3 meters of sea level rise. Besides the effects of rising sea levels, the addition of large amounts of freshwater into the ocean could impact Earth’s climate by disrupting major ocean currents.