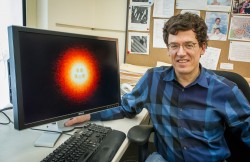 Michael Crommie runs the research group that made the discovery. He holds joint appointments with Berkeley Lab and UC Berkeley. (Photo by Roy Kaltschmidt)

Scientists have finally confirmed a 70 year-old prediction in quantum mechanics—that electrons in super-heavy atoms can spiral into the nucleus and away again, leading to the emission of a positively charged anti-electron (or positron)—an effect known as atomic collapse state. This finding holds important implications for new kinds of graphene-based electronic devices, as well as future basic physics research.

Because it is extremely difficult to make and maintain the super-large nuclei needed to initiate atomic collapse, the effect had never been unambiguously observed before. But aided by simulations generated at the Department of Energy’s National Energy Research Scientific Computing Center (NERSC), a team of researchers recently managed to initiate and observe atomic collapse in an artificial nuclei fabricated on graphene, a one-atom thick sheet of pure carbon, for the first time.

“Atomic collapse state is one of the holy grails of graphene research, as well as a holy grail for atomic and nuclear physics,” says Michael Crommie, a physicist who holds a joint appointment at the Lawrence Berkeley National Laboratory’s (Berkeley Lab) and the University of California (UC) Berkeley. “While this work represents a very nice confirmation of basic relativistic quantum mechanics predictions made many years ago, it is also highly relevant for future nanoscale devices where electrical charge is concentrated into very small areas.” 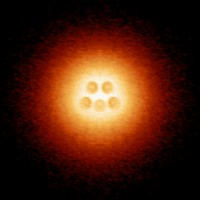 An artificial atomic nucleus made up of five charged calcium dimers is centered in an atomic-collapse electron cloud. (Image courtesy of Michael Crommie)

Perhaps no other material is currently generating as much excitement for new electronic technologies as graphene, where electrons at room temperature freely race 100 times faster than they move through silicon. In recent years, scientists predicted that highly charged impurities in graphene should exhibit a unique electronic resonance—a build-up of electrons partially localized in space and energy—corresponding to the atomic collapse state of super-large atomic nuclei.

To test this idea, Crommie’s research group used a scanning tunneling microscope (STM) to construct artificial nuclei on the surface of graphene. The “nuclei” were actually dimers (clusters made of pairs) of positively charged calcium ions. The team used the STM to push calcium dimers together into a cluster, one by one, until the cluster charge became supercritical and atomic collapse ensued. STM spectroscopy was then used to measure the spatial and energetic characteristics of the atomic collapse electronic state around the dimers.

“When you put calcium dimers on a sheet of graphene, a certain amount of charge (or electrons) is transferred to the graphene. This effectively creates a positive center around the dimer,” says Steven Louie, a senior scientist in Berkeley Lab’s Materials Sciences Division and professor of Physics at UC Berkeley. 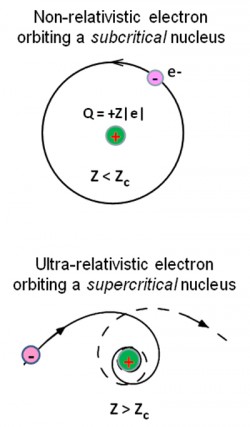 Nonrelativistic electrons orbiting a subcritical nucleus exhibit the traditional circular Bohr orbit of atomic physics. But when the charge on a nucleus exceeds the critical value, Zc, the semiclassical electron trajectory is predicted to spiral in toward the nucleus, then spiral away, a novel electronic state known as “atomic collapse.” Artificial nuclei composed of three or more calcium dimers on graphene exhibit this behavior as graphene’s electrons move in the supercritical Coulomb potential. (Image Michael Crommie.)

According to Crommie, the positively charged calcium dimers perform the same function as protons in super-large atomic nuclei. By squeezing enough positive charge into a sufficiently small area on graphene, researchers can observe how electrons behave around a “nucleus” as it approaches supercritical charge and achieves atomic collapse state. But it is also important to remember that observing atomic collapse in a condensed matter system, like this one, is very different from observing it in a particle collider.

“Based on experiment alone, there is no definitive way of knowing what the net charge transferred from the calcium dimer to graphene is and what the critical charge and signatures for atomic collapse state are, we need theory and supercomputers to unfold this information,” says Louie. “In addition to the charged calcium dimers and STM probe, there are carbon atoms and electrons from the graphene, you have to know what these particles are doing to get the signature of atomic collapse.”

Using NERSC’s Hopper system, Louie and his colleagues ran first principle calculations—which are based on the fundamental scientific laws and forces that govern particles, like electrons—to determine the charge transfer of a single dimer and multiple dimers on a graphene sheet. These calculations also predicted how many dimers would be needed to initiate atomic collapse. These calculations helped the team identify the signature and critical charge of atomic collapse state.

“Just as donor and acceptor states play a crucial role in understanding the behavior of conventional semiconductors, so too should atomic collapse states play a similar role in understanding the properties of defects and dopants in future graphene devices,” Crommie says. “Because atomic collapse states are the most highly localized electronic states possible in pristine graphene, they also present new opportunities for directly exploring and understanding electronic behavior in graphene.”

Crommie is the corresponding author of a paper describing this work in Science. The paper is titled “Observing Atomic Collapse Resonances in Artificial Nuclei on Graphene.” In addition to Louie, co-authors are Yang Wang, Dillon Wong, Andrey Shytov, Victor Brar, Sangkook Choi, Qiong Wu, Hsin-Zon Tsai, William Regan, Alex Zettl, Roland Kawakami, and Leonid Levitov. In addition to Berkeley Lab and UC Berkeley, other institutions represented in this work include UC Riverside, MIT, and the University of Exeter.

This article was adaped from a Berkeley Lab press release.