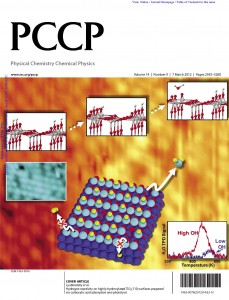 Build a surface of titanium and oxygen atoms arranged just so, coat with water, and add sunshine. What do you get? In theory, energy-rich hydrogen produced by photolysis—a process by which water molecules placed on a catalytic surface and exposed to sunlight (electromagnetic radiation) are split, forming molecular hydrogen (H2) and oxygen (O2).

In reality, this pollution-free method of producing molecular hydrogen for use in fuel cells may soon be within our grasp.

Although fuel cells have been touted as a clean alternative to combustion engines for powering cars, the molecular hydrogen required to fuel this technology is naturally rare on Earth and must be extracted from natural gas or water. To split water molecules, the popular catalyst titanium dioxide (TiO2) needs an even layer of hydroxyl (OH) groups across its surface.  Conventional methods for putting hydroxyl groups on TiO2 achieve about 20 percent coverage, but scientists have been trying to beat those results, getting more coverage without resorting to extremes of time, temperatures, or resources.

Now a team of researchers at the Pacific Northwest National Laboratory (PNNL) and the Worcester Polytechnic Institute (WPI) has figured out how to cover 50 percent of a TiO2 surface with hydroxyl groups.  Using resources at the Department of Energy’s National Energy Research Scientific Computing Center (NERSC) at the Lawrence Berkeley National Laboratory (Berkeley Lab) and the Environmental Molecular Science Laboratory (EMSL) at PNNL, the team also characterized the atomic-level structure and reactivity of the hydroxyl-rich TiO2 surface.

"Understanding reactivity of hydrogen atoms on this unique, highly hydroxylated surface of titania (TiO2) was an important part of this work," said Nikolay Petrik, one of the key researchers on this project, a scientist at the Institute for Integrated Catalysis at PNNL. "Hydrogen can be produced via photocatalysis using titanium-based materials, and it is stored in a form of surface hydroxyls. Our future goal, a great challenge, is to get these hydrogen atoms working, getting them to produce energy."

Petrik is one of seven co-authors of a paper published in a recent issue of Physical Chemistry Chemical Physics.

The team's approach to building a hydroxyl-rich TiO2 was a simple two-step process. First, inside a vacuum chamber, the team exposed the titanium dioxide surface to trimethyl acetic acid (TMAA), a nine-carbon acid. Then they used a mercury lamp and a bit of fiber optics to shine ultraviolet light on the sample. The light removes the core of the acid molecule leaving just hydrogen atoms attached to the surface.

The researchers then characterized the surface of this material using scanning tunneling microscopy, temperature-programmed desorption, and photo-stimulated desorption techniques at EMSL. They also completed density functional theory calculations, using supercomputing resources at NERSC and EMSL to fully understand the structure and reactivity of the surface.

Their results showed that new method resulted in half of the oxygen atoms on the surface having hydrogen attached to them, creating hydroxyl groups. They also found that at high enough temperatures the hydrogen molecules left the TiO2 surface as water, rather than diffusing into the material’s surface to become unwanted “dopants,” or charge traps that would affect its reactivity.

"We achieved good coverage of the surface, 50 percent, and this technique has promise to go all the way to 100 percent," said Igor Lyubinetsky, the lead researcher on the study, a scientist at EMSL and a member of PNNL's Institute for Integrated Catalysis.

"Our next step is to achieve a fully hydroxylated surface," said Lyubinetsky. "It should be possible, but we need to verify." The team is researching the thermodynamics, kinetics, and other factors that influence the surface hydroxylation.

“The surface of titania is very complex and without access to supercomputers like NERSC’s Franklin these calculations just couldn’t be done,” said N. Aaron Deskins of the Worcester Polytechnic Insitute.

This story was adapted from the EMSL story “Water, Sun, Energy” and a PNNL Science Highlight.