NERSC, ESnet and computational scientists help researchers discover how neutrinos flavor-shift as they travel at near light-speed 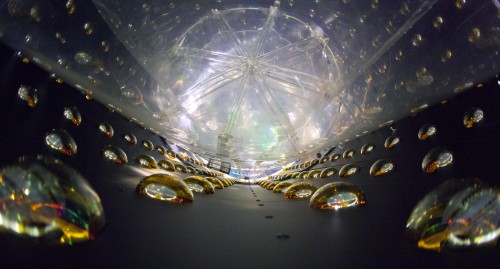 Neutrinos, the wispy particles that flooded the universe in the earliest moments after the Big Bang, are continually produced in the hearts of stars and other nuclear reactions. Untouched by electromagnetism, they respond only to the weak nuclear force and even weaker gravity, passing mostly unhindered through everything from planets to people.

Years ago scientists also discovered another hidden talent of neutrinos. Although they come in three basic “flavors”—electron, muon and tau—neutrinos and their corresponding antineutrinos can transform from one flavor to another while they are traveling close to the speed of light. How they do this has been a long standing mystery.

But some new, and unprecedentedly precise, measurements from the multinational Daya Bay Neutrino Experiment are revealing how electron antineutrinos “oscillate” into different flavors as they travel. This new finding from Daya Bay opens a gateway to a new understanding of fundamental physics and may eventually solve the riddle of why there is far more ordinary matter than antimatter in the universe today.

The international collaboration of researchers is made possible by advanced networking and computing facilities. In the U.S., the Department of Energy’s high-speed science network, ESnet, speeds data to the National Energy Research Scientific Computing Center (NERSC) where it is analyzed, stored and made available to researchers via the Web. Both facilities are located at the DOE’s Lawrence Berkeley National Laboratory (Berkeley Lab).

Nuclear reactors of the China Guangdong Nuclear Power Group at Daya Bay and nearby Ling Ao produce millions of quadrillions of elusive electron antineutrinos every second. The six massive detectors buried in the mountains adjacent to the powerful reactors, make up the Daya Bay Experiment. Researchers in the collaboration count the number of electron antineutrinos detected in the halls nearest the Daya Bay and Ling Ao reactors and calculate how many would reach the detectors in the Far Hall if there were no oscillation. The number that apparently vanishes on the way (oscillating into other flavors, in fact) gives the value of theta one-three, written θ13.

Shortly after experimental data is collected, it travels across the Pacific Ocean via the National Science Foundation’s GLORIAD network, which connects to ESnet backbone in Seattle, Washington.  From Seattle, ESnet carries the data to the NERSC in Oakland, California. At NERSC the data is processed in real-time on the PDSF cluster, archived in the High Performance Storage System (HPSS) and shared with collaborators around the world via the Daya Bay Offline Data Monitor, a web-based “Science Gateway” hosted by NERSC.

The first Daya Bay results show that θ13, once feared to be near zero, instead is “comparatively huge,” remarks Luk Kam-Biu Luk of the Berkeley Lab and the University of California at Berkeley. Luk is co-spokesperson of the Daya Bay Experiment and heads U.S. participation. “What we didn’t expect was the sizable disappearance, equal to about six percent. Although disappearance has been observed in another reactor experiment over large distances, this is a new kind of disappearance for the reactor electron antineutrino,” he explained.

"This is a new type of neutrino oscillation, and it is surprisingly large," says Yifang Wang of China's Institute of High Energy Physics (IHEP), co-spokesperson and Chinese project manager of the Daya Bay experiment. "Our precise measurement will complete the understanding of the neutrino oscillation and pave the way for the future understanding of matter-antimatter asymmetry in the universe."

Computing’s Crucial Role in the Discovery

As a United States Tier-1 facility for the Daya Bay Neutrino Experiment, NERSC is the only site where all of the raw, simulated and derived data are analyzed and archived. From NERSC, ESnet carries Dayabay data to Brookhaven National Laboratory (BNL), which serves as a Tier-2 US facility for the experiment. BNL is responsible for secondary data processing of Daya Bay Data, as well as some archiving.

“This experiment could not have been done without NERSC and ESnet,” says Craig Tull, of the Berkeley Lab’s Computational Research Division. “Over the last four to five years we’ve been doing simulations and analysis on PDSF, transferring and archiving data on HPSS, and accessing results on the Science Gateway. The experiment could not have been done with out these resources and the very capable and conscientious staff helping us.”

As the US manager of software and computing for the Daya Bay Neutrino Experiment, Tull led the overall computing effort including development of a software framework, called NuWa, which allows researchers all over the world to collaborate in analyzing this experimental data, and of the Spade-driven data management and processing pipeline. He also coordinated with ESnet and NERSC staff to ensure that Daya Bay data could be processed, analyzed and archived in real time, providing scientists immediate insight to the quality of physics data and performance of detectors.

“The software and computing components of the Daya Bay Neutrino Experiment have been extremely crucial to science,” says Tull. “Thanks to the computing expertise at Berkeley Lab, we were able to see antineutrinos with NuWa in the first filled detectors within 24 hours.  We were able to see an anti-neutrino deficit in the far hall within days.  And finally, we have been able to extract a high-quality θ13 value within only 75 days of start of far-hall running.”

"Exemplary teamwork among the partners has led to this outstanding performance," says James Siegrist, DOE Associate Director of Science for High Energy Physics. "These notable first results are just the beginning for the world's foremost reactor neutrino experiment."

The Daya Bay collaboration consists of scientists from the following countries and regions: China, the United States, Russia, the Czech Republic, Hong Kong, and Taiwan. The Chinese effort is led by co-spokesperson, chief scientist, and project manager Yifang Wang of the Institute of High Energy Physics, and the U.S. effort is led by co-spokesperson Kam-Biu Luk and project and operations manager William Edwards, both of Berkeley Lab and UC Berkeley, and by chief scientist Steve Kettell of Brookhaven.