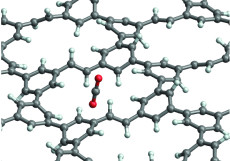 Carbon dioxide is the primary greenhouse gas emitted through human activities, such as the combustion of fossil fuels for energy and transportation, and it is widely accepted that it is one of the primary greenhouse gases contributing to global climate change. Reducing carbon dioxide emissions, therefore, is an important challenge for preventing such climate change. But all of the current approaches to separating carbon dioxide from the exhausts of power plants, which is one way to reduce those emissions, require too much energy to be economically feasible. Until now.

Using supercomputers at the Department of Energy’s National Energy Research Scientific Computing Center (NERSC), researchers from Haverford College have come up with a new type of two-dimensional polymer, PG-ES1, which allows, in theory, for highly efficient separation of carbon dioxide. Based on simulations, PG-ES1 is predicted to be more than 100-times as permeable to carbon dioxide than the best existing materials, while maintaining a rejection of nitrogen and methane gases that meets or exceeds the best existing materials. This allows it to act as a molecular filter that lets the carbon dioxide to pass through easily, while preventing other gases from escaping.

Haverford Assistant Professor of Chemistry Joshua Schrier authored a paper on this new material in the most recent issue of ACS Applied Materials and Interfaces. He says the key to the new process is to utilize both the preferential adsorption of carbon dioxide gas molecules on the surface and the ability to create small, nanometer-sized pores in the surface.

“Nitrogen and carbon dioxide are linear molecules, and the holes are too small to allow them to enter in any way other than along their ‘skinniest’ dimensions,” says Schrier. “As it turns out, carbon dioxide is a little skinnier than nitrogen, which allows it to pass through the hole more readily. Although it is unlikely that a random molecule would have the correct orientation, the surface adsorption helps increase the local concentration of carbon dioxide and allows each carbon dioxide molecule to try several attempts at different orientations until it finds the correct one, which ‘stacks the deck’ in favor of carbon dioxide passage. Nobody has previously considered the role of surface adsorption on the barrier crossing process, but it is absolutely crucial for performing this type of separation.”

Using NERSC’s Hopper system, the 16th fastest supercomputer in the world and the sixth fastest in the United States, Schrier performed detailed molecular simulations, which followed the paths of the molecules under various conditions and tested their interactions with different types of materials. He was able to do this thanks to the support of a NERSC Initiative for Scientific Exploration (NISE) award of 500,000 CPU hours and an allocation of 450,000 CPU hours by the U.S. Department of Energy's Basic Energy Sciences Program—in total, the equivalent of running a single computer for over 100 years.

In addition to the computational resources, Schrier also credits NERSC user  consultant Zhengji Zhao and Advance Technologies Group member Brian Austin  with play a critical role in this work. He notes that Zhao made some crucial modifications to the team’s software, while Austin enhanced the performance  of the code by a factor of three. Schrier is now working with Zhao and  Austin to build on this work to understand helium separation from natural gas, as well as paraffin and olefin separation.

“I would not have been able to do this work without the computational resources at NERSC…. Besides the computer time itself, the support from NERSC staff members for modifying the software and finding ways to improve the performance was crucial to this work.”

Moving forward, the work with PG-ES1 is continuing on campus. Associate Professor Chemistry Frances Blase and her students, Malenca Logan ’14 and Alexandra John ’13 are synthesizing the building blocks needed to construct the polymer. Anna Brockway ’12 is currently completing work that she began for her senior thesis on the use of PG-ES1 and related polymers for separating helium from natural gas. Kylen Solvik ’15 and Jessica Weaver ’13 are exploring modified versions of the polymers for performing energy-efficient separation of paraffin/olefin mixtures, key components in the manufacture of plastics. Anahita Nourmahnad ’14 and Matthew Holmes ’15 are investigating new types of materials that may be easier to synthesize. And Schrier, Blase and recent graduate Brockway have filed for a provisional patent on the polymer.

“This work proposes a promising new approach to carbon dioxide separation and could have important implications in the future,” says Jeffrey Grossman, the Carl Richard Soderberg Associate Professor of Power Engineering in the Department of Materials Science and Engineering at the Massachusetts Institute of Technology. “While the chemical structure proposed by Professor Schrier has yet to be synthesized in the laboratory, it highlights the potential of computational methods in designing novel materials for separation science.”

The work was funded by the Research Corporation for Scientific Advancement, and used computer resources at NERSC, which is located at the Lawrence Berkeley National Laboratory (Berkeley Lab). After earning his Ph.D. in theoretical physical chemistry from UC Berkeley, Schrier joined Berkeley Lab Computing Sciences as a Luis Alvarez Fellow in May 2005. As a post-doc in the Computational Research Division’s Scientific Computing Group, Schrier worked with Lin-Wang Wang to develop new computational models to study the properties of nanoscale materials. In 2008, he left Berkeley Lab and joined Haverford College.

“I would not have been able to do this work without the computational resources at NERSC,” says Schrier. “Besides the computer time itself, the support from NERSC staff members for modifying the software and finding ways to improve the performance was crucial to this work. Besides enabling my own research, this provides a great opportunity for Haverford’s undergraduate student researchers to learn high-performance computational simulation methods and apply them to solve their research problems. Having access to a huge computational resource lets them make the most of the short time for summer and senior research, and do exciting science that would be unthinkable otherwise.”