Two-thirds of the water in California passes through the Sacramento-San Joaquin Delta, providing drinking water for 22 million Californians and supporting agriculture valued at tens of billions of dollars. Understanding how the water flows through the Delta on its way to pumping stations and San Francisco Bay is imperative to balance conflicting demands on this critical resource.

Under the umbrella of the Center for Information Technology Research in the Interest of Society (CITRIS), Lawrence Berkeley National Laboratory (Berkeley Lab), and the University of California at Berkeley’s Department of Civil and Environmental Engineering and Department of Electrical Engineering are collaborating to conduct an unprecedented experiment in the area of hydrodynamic monitoring to advance our understanding of water conditions in the Delta. For the large part of a day, 100 mobile sensors will be placed into the Sacramento River near Walnut Grove, Calif., making four critical measurements every few seconds and then transmitting the data for assimilation and analysis at Berkeley Lab’s National Energy Research Scientific Computing Center (NERSC).

This approach will dramatically increase the amount of information about the Delta. Currently, flow data are collected by a series of stationary sensors at a limited number of locations in the 700-mile waterways comprising the Delta estuary.

“Now we have two USGS stations around the experiment area giving us limited data points,” said Qingfang Wu, a Ph.D. student working on the project. “But with this experiment, we’ll have 100 sensors floating together and covering the whole area of study.”

According to Wu, each floating sensor will be taking measurements of the tidal stage, velocity, and temperature and relaying its position every few seconds. Wu’s role is to process the streaming data using high performance computers at NERSC.

The increase in the amount of data and need for near real-time data analysis necessitates the need for additional compute resources making use of NERSC resources an obvious choice for this workload. Lavanya Ramakrishnan of NERSC’s Technology Integration Group worked with the team to accommodate their data processing needs. Although the amount of data wasn’t large, the transmission rate is higher than usual and the team would like to be able analyze it in near real-time. Since NERSC staff began working on the project a year ago, such projects are becoming more common, but still require some work-arounds, such as advance reservations for compute time on NERSC HPC resource queues.

“We’re not typically set up for such programs as this is a very different kind of workload,” Ramakrishnan said, “but we were able to help them set up their software infrastructure and get up to speed on using our systems.” 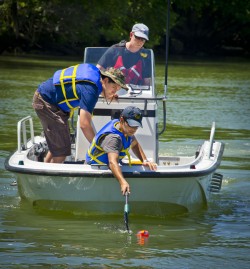 CITRIS, Berkeley Lab, and UC Berkeley's Department of Civil and Environmental Engineering and Department of Electrical Engineering unleash 100 floating sensors to understand how water flows through the Sacramento-San Joaquin Delta on its way to pumping stations and San Francisco Bay. Photo by Roy Kaltschmidt (Berkeley Lab).

An important goal of the project is to improve the ability of using computers to simulate Delta conditions. In the project, the REALM (River, Estuary and Land Model) model developed by Department of Water Resources and Berkeley Lab’s Computational Research Division is used to simulate the flow conditions. However, even the best numerical models still contain some inaccuracies – a problem to be addressed via data assimilation.

“This is a cool project, but in order to do the data assimilation process in real time, we need many high-performance computing technologies and resources,” Wu said.

Assimilating the data involves compiling all of the data from the sensors, such as water depth, velocity, salinity, temperature, etc., and making them available for analysis. The team has further developed probability distributions via an ensemble of different model simulations, each with varying boundary conditions, to collectively reflect what could be happening in the waterways. The assimilated data from the sensors are subsequently incorporated into the models to advance their probability distributions, and provide the optimal estimate of current state of the hydro system. Each of these models has millions of cells to be solved in real time, requiring the high-performance computing resources at NERSC.

“Essentially, the assimilation steps are selected to compensate the uncertainty in the drifter data and in the model simulations,” said Wu, an environmental engineering student at Cal. “The data processed in the model are totally different from what have been traditionally collected – they’re much more detailed.”

Wu has co-authored several papers on the computing aspects of the project with Project Lead Prof. Alexandre Bayen and Research Lead Andrew Tinka, among others. One of the biggest challenges, she said, is that the group is the first one to use such sensors in a large Delta watershed.

“There are still unresolved issues in the Delta water simulation. Our goal is to eventually provide accurate estimates of water conditions in real time,” Wu said. “This will give policy-makers a true picture of what’s happening. This should be a great service to the people of California.”