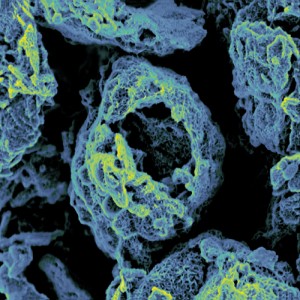 One of the biggest weaknesses of today’s electric vehicles (EV) is battery life—most cars can only go about 100-200 miles between charges. But researchers hope that a new type of battery, called the lithium-air battery, will one day lead to a cost-effective, long-range EV that could travel up to 300 miles or more between charges.

Using supercomputers at the National Energy Research Scientific Computing Center (NERSC) and microscopy, a team of researchers from the Pacific Northwest National Laboratory (PNNL) and Princeton University recently built a novel graphene membrane that could produce a lithium-air battery with the highest-energy capacity to date.

Composed of an atom-thick sheet of carbon, graphene is both the strongest and most conductive material ever measured. The new membrane is built from graphene formed around bubbles, and resembles broken eggshells. The researchers believe that this black, porous material could replace traditional smooth graphene sheets in lithium air batteries, which become clogged with tiny particles during use. Because the material does not rely on platinum or other precious metals, the researchers say that its potential cost and environmental impact are significantly less than current technology.

"This hierarchical structure of self-assembled graphene sheets is an ideal design not only for lithium-air batteries but also for many other potential energy applications," said Dr. Jie Xiao, the materials scientist at PNNL who led the study.

The researchers built the material by combining a binding agent with graphene, and similar to the way soap disperses grease in dishwater, the binding agent dispersed graphene in the solution. The graphene and binder were then added to water and mixed using a process that created bubbles in the solution. The graphene and binder then formed and hardened around the bubbles. When these bubbles popped, hollow spheres of graphene, about 3 to 4 microns in diameter (10 times smaller than human hair), were left behind.

Properties of the new graphene membrane simulated on NERSC systems. Carbon atoms are represented in gray, lithium atoms are purple and oxygen atoms are red.. In each structure, the top and side views are shown in the upper and lower panel, respectively. (Image by Donghai Mei, PNNL)

Once the membrane was created, team members used both modeling and electron microscopy to analyze the graphene structures and their performance. They studied the particles using electron microscopy at the Environmental Molecular Sciences Laboratory, then performed density functional theory calculations on NERSC’s Franklin and Hopper systems to further investigate behaviors that they noticed in the microscopy experiments. These simulations helped them figure out how to manipulate the material.

Ultimately, the researchers found that the black porous structures store more than 15,000 milliamp hours per gram of graphene, making it far denser in energy capacity than other materials. The NERSC simulations were performed by PNNL scientist, Donghai Mei.

"Many catalysts are studied now for this technology. In our process we chose not to use precious metal," said Dr. Ji-Guang Zhang, the group leader in PNNL's lithium-air battery research. "This will greatly reduce production costs and increase the adoptability."

Although the battery is achieving the highest level of energy capacity in an oxygen-only environment, when operated in ambient air, the capacity drops because water vapor in the air fouls the lithium metal in the batteries. The PNNL team is working to develop a membrane to block the water and still allow the necessary oxygen to flow.

"We also want to make the battery rechargeable," said Zhang. "Right now, it is not. It is not fully rechargeable. We are working on a new electrolyte and a new catalyst so that the battery can be recharged multiple times, potentially for battery backup applications that require high energy densities."

This story was adapted from a PNNL research highlight. The paper was published in ACS Chemical & Engineering News.