Astronomers predict that large spiral galaxies, like our Milky Way, have hundreds of satellite galaxies orbiting around them. While a few satellites are visible, like the Magellanic Clouds, many other galaxies are too dim to see. Scientists suspect that these faint satellite galaxies are primarily comprised of mysterious “dark matter,” which makes up 85 percent of all matter in the universe and so far remains undetected.

Using supercomputers at the National Energy Research Scientific Computing Center (NERSC), Sukanya Chakrabarti, has developed a mathematical method uncover these “dark” satellites. When she apaneplied this method to our own Milky Way galaxy, Chakrabarti discovered a faint satellite might be lurking on the opposite side of the galaxy from Earth, approximately 300,000 light-years from the galactic center

“Our approach has broad implications for many fields of physics and astronomy—for the indirect detection of dark matter as well as dark-matter dominated dwarf galaxies, planetary dynamics, and for galaxy evolution dominated by satellite impacts,” says Chakrabarti, who presented these findings at the American Astronomical Society meeting in Seattle. This result came from Chakrabarti’s postdoctoral research at the University of California, Berkeley. She is currently an assistant professor of physics at Florida Atlantic University.

Chakrabarti’s technique involves an analysis of the cold atomic hydrogen gas that comprise the outskirts of a large spiral galaxy’s disk. This cold gas is gravitationally confined to the galactic disk and extends much further out than the visible stars—sometimes up to five times the diameter of the visible spiral. This gas can be mapped by radio telescopes.

According to Chakrabarti, the dark satellite galaxies create disturbances in the cold atomic hydrogen gas at the edges of the spiral galaxy’s disk, and these perturbations reveal the mass, distance and location of the satellite. With the help of NERSC systems, she successfully validated her method by analyzing the radio observations of the Whirlpool Galaxy, which has a visible satellite one-third of its size, and NGC 1512, which has a satellite one-hundredth its size. Her calculations correctly predicted the mass and location of both of the known satellite galaxies.

When she applied this analysis to radio observations of our own Milky Way, the analysis revealed a potential dwarf galaxy, or Galaxy X, sitting in the constellation of Norma or Circinus, just west of the galactic center in Sagittarius when viewed from Earth. Because this satellite sits across the Milky Way from Earth, it is obscured in our line of sight by gas and dust, and thus has not been detected. 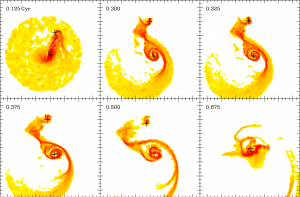 A simulation of the evolution of hydrogen gas in the Whirlpool Galaxy (central cross) and its satellite NGC 5195 (top cross), over a period of 875 million years Image: Sukanya Chakrabarti, UC Berkeley

According to her colleague Leo Blitz of the University of California at Berkeley, searching for satellite galaxies with this method is like inferring the size and speed of a ship by looking at its wake. “You see the waves from a lot of boats, but you have to be able to separate out the wake of a medium or small ship from that of an ocean liner,” he says.

“The NERSC systems really sped up my work,” says Chakrabarti. “These systems are a great resource. I am currently using my method to develop a test of modified theories of gravity, and plan on running the simulations at NERSC.”

To illustrate how a satellite galaxy disrupts the gas disk of a large spiral for the American Astronomical Society (AAS) Conference in January 2011, Chakrabarti turned to NERSC Analytics team member Prabhat who translated her scientific data into a three-dimensional (3D) movie for the Space Science Telescope Institute Booth with the VisIt software.

“When a person looks up at the night sky from Earth, they can’t tell the difference between a star that is far away and one that is nearby. It is the same when you are running simulations on a flat screen, you see bands that stretch in and out but you don’t get the depth that a 3D visualization provides,” says Prabhat.

“Visualizing the merger of two galaxies is like watching a stone drop into a pond. A 2D slice lets you see the ripples, but a 3D view will let you see the splash. In this case of galaxy mergers, a 3D visualization lets us see the splash of the gas and instabilities in the galactic disk in real-time,” says Chakrabarti. “This depth is invaluable when you are studying dynamical phenomenon with variation in the plane.”

Chakrabarti’s allocation at NERSC was provided by the Office of High Energy Physics’ (HEP) Baryon Oscillation Spectroscopic Survey (BOSS) project, which is mapping the Universal expansion rate in unprecedented precision. HEP is a part of the Department of Energy’s office of Science. The radio observations of our Milky Way’s gas disk came from the HI Nearby Galaxy Survey (THINGS) conducted by the Very Large Array, and its extension in the Southern Hemisphere, THINGS-SOUTH, a survey carried out by the Australia Telescope Compact Array.

This story was adapted from a University of California press release written by Robert Sanders.

≫Watch a video of Chakrabarti explaining her mathematical method for finding dark matter dominated galaxies at the 217 AAS Meeting in Seattle, Washington.