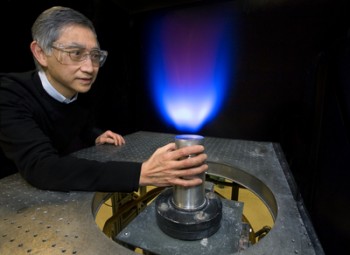 Robert Cheng demonstrates his low swirl burner in the lab. The housing remains cool to the touch, as shown here.

Combustion – the complex chemical process of burning fuels – is a huge driver behind the American economy and standard of living, producing more than 83 percent of our nation’s energy. In addition to fueling power plants, combustion also drives aircraft, ships, locomotives, and trucks and cars (even hybrids). At home, we rely on combustion for heating systems, water heaters, stoves, ovens and even clothes driers.

In spite of its technological importance, our knowledge of the combustion process is surprisingly incomplete. By increasing our understanding of combustion, we can improve the efficiency of a wide range of products and systems, reduce the amount of pollution generated and enable the use of domestically produced alternative fuels.

At Lawrence Berkeley National Laboratory, applied mathematicians using supercomputers are working directly with combustion scientists to better understand the complex chemistry of combustion to develop next generation combustion equipment for power generation that is cleaner, more efficient, and can burn newer fuels from renewable sources. Berkeley Lab has developed a promising new combustion technology, the low-swirl burner, which is the heart of combustion research at the lab.

Developed by Robert Cheng in the Lab’s Environmental Energy Technologies Division, the low-swirl burner is a mechanically simple device. With no moving parts, it imparts a mild spin to the fuel and air mixture, causing it to spread out and burn at a lower temperatures than that of conventional burners. Lower flame temperatures greatly reduce the amount of nitrogen oxides (NOx) produced and can increase the efficiency of the device. In the atmosphere NOx gases combine with other chemicals forming compounds that can cause or aggravate health problems such as emphysema, bronchitis, asthma and heart disease.

The design is already being used commercially by Maxon Corp. (a subsidiary of Honeywell) in two of its ultra-low NOx industrial burners. Now Cheng is working to make the device more efficient and able to burn different fuels, in particular hydrogen. And he is thinking big – designing the low-swirl burner to operate in room-sized combustion chambers where fuels are burned at high pressure and high temperature.

“The challenge is daunting because of the range of scales,” Cheng said. Combustion chemistry occurs at the micron scale with the flame burning at 2800 degrees Fahrenheit and at up to 20 atmospheres of pressure. At these conditions the burners are expected to operate around the clock for up to three years, about 185,000 hours. Compare this with an internal combustion engine in a car, which is designed to last about 10,000 hours with regular maintenance.

The challenge to scientists is to get a clear understanding of what’s going on inside the flame. On the experimental side, inserting a probe into the flame isn’t practical as the probe disrupts the flame and changes the chemistry. The one method that does provide some insight is to use a laser to grab split-second images of the flame and then analyze it, but this only provides two dimensional snapshots and doesn’t capture the intricacies of the continual burning process. Combustion theory provides a foundation for basic flame analysis, but is unable to directly address the complexity of realistic flames.

Computation has the potential for closing the gap between theory and experiment, enabling dramatic progress in combustion science. However, simulation of practical-scale combustion devices is an immense undertaking. The problem is inherently multi-scale both in time and space, the fuel is often turbulent, and the combustion process may involve hundreds of species and thousands of chemical reactions. Traditional simulation approaches are either too unwieldy, too limited or incomplete for accurately exploring fundamental fluid/chemistry interactions.

Such detailed accuracy in simulations was impossible just a few years ago. However, algorithmic improvements developed by scientists in Berkeley Lab’s Center for Computational Sciences and Engineering (CCSE) have slashed computational costs for combustion simulations by a factor of 10,000. The increase in complexity (and fidelity) has enabled laboratory-scale 3D simulations, and the number of variables used to specify the solution has increased from hundreds of thousands to more than a billion. 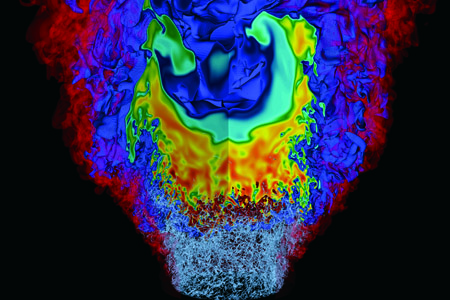 The research approach taken by CCSE has explicitly targeted the multiscale aspects of combustion modeling. To create such accurate simulations, CCSE has developed software tools based on adaptive mesh refinement (AMR), a grid-based system that uses partial differential equations to describe information in the most efficient manner possible -- applying a fine mesh, and maximum computing power, to the areas of most interest, and a coarse mesh to areas where data is not as significant.

“In my mind, the true value of AMR is for our gas turbine development that requires the burner to operate at high temperatures and pressures,” Cheng said. “Thus far, detailed experimental measurements of the flame structures and turbulent flowfields at these conditions are not feasible now or in the near future. Simulation results at high pressure and temperatures are therefore extremely valuable.”

The latest round of research by the two groups is aimed at adapting the design to burn hydrogen. Burning hydrogen has the benefit of not releasing greenhouse gases, but the fuel burns much faster and releases energy at a higher rate than natural gas. Scientists have found that as the fuel mixture contains more hydrogen, the amount of NOx produced levels off at an extremely low level, but can’t be reduced to zero. Since the goal is to reduce the amount of NOx, the team uses supercomputers at DOE’s National Energy Research Scientific Computing (NERSC) Center to simulate this phenomenon.

The simulation generated a bowl-shaped flame that matches experimentally measured flame profiles in terms of local structure and general shape, and is now being processed for new insights on NOx formation. The simulation required 20,000 processors to generate the necessary level of detail.

“In order to develop clean, energy-efficient systems, we need a continuous feedback loop from the flame to the lab and back again,” Cheng said. “This is the missing link that computation at NERSC provides.”