You’d think that spotting a category 5 hurricane would never be difficult. But when the hurricane is in a global climate model that spans several decades, it becomes a fleeting wisp among mountains of data.

That’s a problem. As scientists develop ever-more sophisticated computer models to predict the effects of climate change, one of the things they’ll look for are changes in the frequency of extreme weather events such as hurricanes and heavy precipitation. The more data generated by models, however, the more difficult it is to quantify these rare but potent events. 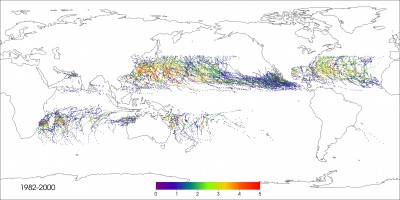 What’s needed is an automated way to quickly comb through a climate simulation’s huge dataset and tally the weather events that spell big trouble. A team of researchers that includes scientists from Lawrence Berkeley National Laboratory (Berkeley Lab) are developing techniques to do just that.

In one example, the scientists began with a recent run of the Community Atmospheric Model (CAM5), which is the latest in a series of global atmosphere models developed primarily at the National Center for Atmospheric Research. The high-resolution simulation spanned from 1979 to 2005 and is being used to demonstrate how well the model reproduces observed tropical cyclones. It was conducted on Hopper, a Cray XE6 supercomputer at the National Energy Research Scientific Computing Center (NERSC), which is located at Berkeley Lab. 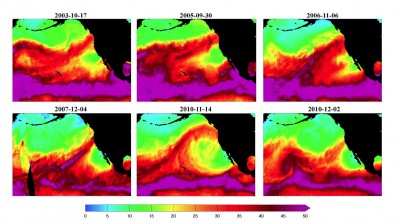 Some typical atmospheric river events detected by the new method from the observational dataset. Shown is total column integrated precipitable water in millimeters. Note that data irregularities in the satellite measurements (such as the abrupt discontinuities in the 2007-12-04 event) do not have an adverse effect on the detection procedure.

In another example, the scientists developed a pattern-detection algorithm that sifts through large datasets for a weather phenomenon called an atmospheric river. These are narrow corridors of water vapor that occur at mid-latitudes around the world. People who live on the Pacific coast of North America may know the phenomenon as a pineapple express, which channels moisture from the Hawaiian Islands to the west coast. These powerful storms can bring torrential rain, floods, and damaging wind.

The scientists used techniques from image processing and topological analysis to extract the telltale features of atmospheric rivers from satellite images and climate models. They then implemented these techniques in a massively parallel fashion on a supercomputer platform to automatically detect these events in large datasets.

They applied this software to satellite images from 2002 to 2010 and atmospheric modeling data from 1979 to 1993, representing 640 gigabytes of data in all. The software processed this data in about three seconds using 8500 cores on the NERSC Hopper system, and detected 92 percent of the atmospheric rivers that made landfall. The same process would have taken several hours on a conventional desktop computer.