A Better Lithium-ion Battery on the Way At left, the traditional approach to composite anodes using silicon (blue spheres) for higher energy capacity has a polymer binder such as PVDF (light brown) plus added particles of carbon to conduct electricity (dark brown spheres). Silicon swells and shrinks while acquiring and releasing lithium ions, and repeated swelling and shrinking eventually break contacts among the conducting carbon particles. At right, the new Berkeley Lab polymer (purple) is itself conductive and continues to bind tightly to the silicon particles despite repeated swelling and shrinking.

Lithium-ion batteries are everywhere, in smart phones, laptops, an array of other consumer electronics, and the newest electric cars. Good as they are, they could be much better, especially when it comes to lowering the cost and extending the range of electric cars. To do that, batteries need to store a lot more energy.

A team of scientists at the U.S. Department of Energy’s Lawrence Berkeley National Laboratory (Berkeley Lab) has designed a new kind of anode — a critical energy-storing component — capable of absorbing eight times the lithium of current designs. The new type anode has maintained its greatly increased energy capacity after over a year of testing and many hundreds of charge-discharge cycles.

The secret is a tailored polymer that conducts electricity and binds closely to lithium-storing silicon particles, even as they expand to more than three times their volume during charging and then shrink again during discharge. The new anodes are made from low-cost materials, compatible with standard lithium-battery manufacturing technologies. Using supercomputers at the National Energy Research Scientific Computing Center (NERSC), the team ran ab initio calculations of the promising polymers until they achieved this result. The research team reports its findings in Advanced Materials, now available online.

“We had the experimental evidence, but to understand what we were seeing, and its relevance to the conductivity of the polymer, we needed a theoretical explanation, starting from first principles,” says Wanli Yang of Berkeley Lab’s Advanced Light Source (ALS).

Says Liu, “Most of today’s lithium-ion batteries have anodes made of graphite, which is electrically conducting and expands only modestly when housing the ions between its graphene layers. Silicon can store 10 times more – it has by far the highest capacity among lithium-ion storage materials – but it swells to more than three times its volume when fully charged.”

This kind of swelling quickly breaks the electrical contacts in the anode, so researchers have concentrated on finding other ways to use silicon while maintaining anode conductivity. Many approaches have been proposed; some are prohibitively costly.

“Conducting polymers aren’t a new idea,” says Liu, “but previous efforts haven’t worked well, because they haven’t taken into account the severe reducing environment on the anode side of a lithium-ion battery, which renders most conducting polymers insulators.” 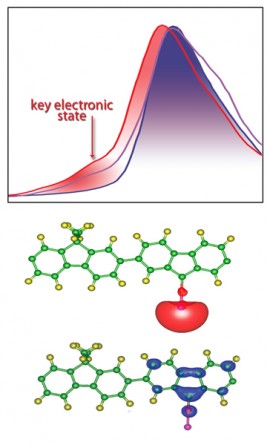 One such experimental polymer, called PAN (polyaniline), has positive charges; it starts out as a conductor but quickly loses conductivity. An ideal conducting polymer should readily acquire electrons, rendering it conducting in the anode’s reducing environment.

The signature of a promising polymer would be one with a low value of the state called the “lowest unoccupied molecular orbital,” where electrons can easily reside and move freely. Ideally, electrons would be acquired from the lithium atoms during the initial charging process. Liu and his postdoctoral fellow Shidi Xun in EETD designed a series of such polyfluorene-based conducting polymers – PFs for short.

Says Yang, “Gao wanted to know where the ions and electrons are and where they move. Soft x-ray spectroscopy has the power to deliver exactly this kind of crucial information.”

Compared with the electronic structure of PAN, the absorption spectra Yang obtained for the PFs stood out immediately. The differences were greatest in PFs incorporating a carbon-oxygen functional group (carbonyl).

“We had the experimental evidence,” says Yang, “but to understand what we were seeing, and its relevance to the conductivity of the polymer, we needed a theoretical explanation, starting from first principles.” He asked Lin-Wang Wang of Berkeley Lab’s Materials Sciences Division (MSD) to join the research collaboration.

Wang and his postdoctoral fellow, Nenad Vukmirovic, conducted ab initio calculations of the promising polymers at the Lab’s National Energy Research Scientific Computing Center (NERSC). Wang says, “The calculation tells you what’s really going on – including precisely how the lithium ions attach to the polymer, and why the added carbonyl functional group improves the process. It was quite impressive that the calculations matched the experiments so beautifully.”

The simulation did indeed reveal “what’s really going on” with the type of PF that includes the carbonyl functional group, and showed why the system works so well. The lithium ions interact with the polymer first, and afterward bind to the silicon particles. When a lithium atom binds to the polymer through the carbonyl group, it gives its electron to the polymer  – a doping process that significantly improves the polymer’s electrical conductivity, facilitating electron and ion transport to the silicon particles. 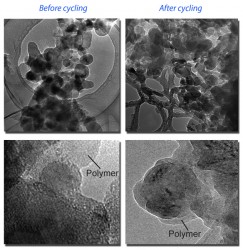 Transmission electron microscopy reveals the new conducting polymer’s improved binding properties. At left, silicon particles embedded in the binder are shown before cycling through charges and discharges (closer view at bottom). At right, after 32 charge-discharge cycles, the polymer is still tightly bound to the silicon particles, showing why the energy capacity of the new anodes remains much higher than graphite anodes after more than 650 charge-discharge cycles during testing.

Having gone through one cycle of material synthesis at EETD, experimental analysis at the ALS, and theoretical simulation at MSD, the positive results triggered a new cycle of improvements. Almost as important as its electrical properties are the polymer’s physical properties, to which Liu now added another functional group, producing a polymer that can adhere tightly to the silicon particles as they acquire or lose lithium ions and undergo repeated changes in volume.

Scanning electron microscopy and transmission electron microscopy at the National Center for Electron Microscopy (NCEM), showing the anodes after 32 charge-discharge cycles, confirmed that the modified polymer adhered strongly throughout the battery operation even as the silicon particles repeatedly expanded and contracted. Tests at the ALS and simulations confirmed that the added mechanical properties did not affect the polymer’s superior electrical properties.

“Without the input from our partners at the ALS and in MSD, what can be modified and what should not be modified in the next generation of polymers would not have been obvious,” says Vince Battaglia, Program Manager of EETD’s Advanced Energy Technologies Department.

“This achievement provides a rare scientific showcase, combining advanced tools of synthesis, characterization, and simulation in a novel approach to materials development,” says Zahid Hussain, the ALS Division Deputy for Scientific Support and Scientific Support Group Leader. “The cyclic approach can lead to the discovery of new practical materials with a fundamental understanding of their properties.”

The icing on the anode cake is that the new PF-based anode is not only superior but economical. “Using commercial silicon particles and without any conductive additive, our composite anode exhibits the best performance so far,” says Gao Liu. “The whole manufacturing process is low cost and compatible with established manufacturing technologies. The commercial value of the polymer has already been recognized by major companies, and its possible applications extend beyond silicon anodes.”

Anodes are a key component of lithium-ion battery technology, but far from the only challenge. Already the research collaboration is pushing to the next step, studying other battery components including cathodes.

Materials research for this work in the BATT program was supported by the U.S. Department of Energy’s Office of Energy Efficiency and Renewable Energy. The ALS, NCEM, and NERSC are national scientific user facilities supported by DOE’s Office of Science.