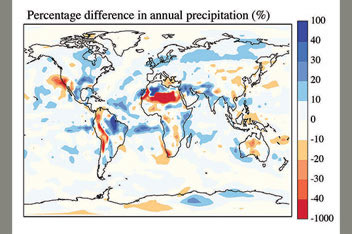 The blue regions of this world map show where annual precipitation is higher because of the presence of flowering plants, according to NERSC supercomputer simulations. (Courtesy of C.K. Boyce and J.–E. Lee)

The world is a cooler, wetter place because of transpiring flowers, say University of Chicago researchers who ran more than a million lines of code on the National Energy Research Scientific Computing Center's (NERSC's) IBM Power5 "Bassi" system last year. They found that this effect is especially pronounced in the Amazon basin, where 80 percent of ever-wet rainforest area would not exist without flowering plants. These findings were published online on June 16, 2010 in Proceedings of the Royal Society B.

"The vein density of leaves within the flowering plants is much, much higher than all other plants," said the study's lead author, C. Kevin Boyce, Associate Professor in Geophysical Sciences at the University of Chicago.

He notes that the higher vein density in the leaves means that flowering plants are very efficient at transpiring water from the soil back into the sky, where it can return to the Earth as rain. "That whole recycling process is dependent upon transpiration, and transpiration would have been much, much lower in the absence of flowering plants. We can know that because no leaves throughout the fossil record approach the vein densities seen in flowering plant leaves," says Boyce.

To see what the world would look like without flowers, Boyce teamed up with Jung-Eun Lee, an atmospheric scientist at the University of Chicago and long-time NERSC user. At the time Lee was working on a Department of Energy (DOE) sponsored project with Inez Fung, of UC Berkeley, to understand how soil moisture feeds back into climate through energy, water and carbon exchanges. She realized that similar simulations could contribute significant insights to Boyce's research as well.

According to Lee, the atmosphere, land surface and oceans exchange energy, water and trace substances on all space and time scales. The exchange is dependent on, and in turn determines, the states of the atmosphere and biosphere themselves. "The motion of the air is dependent on temperature distribution, and the temperature distribution depends on how heat is distributed. Evapotranspiration is very important in this equation, that's why we have plants in the model," she adds.

In total, Lee used approximately 20,000 computer processor hours at NERSC to run these simulations, and recently submitted a companion paper to the Journal of Geophysical Research. The Community Climate Model was developed with some funding from DOE's Scientific Discovery Through Advanced Computing (SciDAC) program. Meanwhile, the Energy Department's Office of Biological and Environmental Research supports Inez Fung's climate research. After more than four years in production, NERSC's Bassi system was replaced in April 2010 with another IBM system called "Carver."

This story was adapted from a University of Chicago press release written by Steve Koppes.