Silica is one of the most common minerals on Earth. Not only does it make up two-thirds of our planet's crust, it is also used to create a variety of materials from glass to ceramics, computer chips and fiber optic cables. Yet new quantum mechanics results generated by a team of physicists from Ohio State University (OSU) show that this mineral only populates our planet superficially—in other words, silica is relatively uncommon deep within the Earth. 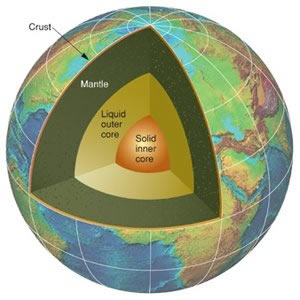 Cross-section of the Earth

Using several of the largest supercomputers in the nation, including the National Energy Research Scientific Computing Center’s (NERSC) Cray XT4 "Franklin" system, the team simulated the behavior of silica in high-temperature, high-pressure environments that are particularly difficult to study in a lab. These details may one day help scientists predict complex geological processes like earthquakes and volcanic eruptions. Their results were published in the May 10 online early edition of the Proceedings of the National Academy of Sciences (PNAS).

"Silica is one of the simplest and most common minerals, but we still don't understand everything about it. A better understanding of silica on a quantum-mechanical level would be useful to earth science, and potentially to industry as well," says Kevin Driver, an OSU graduate student who was a lead author on the paper. "Silica adopts many different structural forms at different temperatures and pressures, not all of which are easy to study in the lab."

Over the past century, seismology and high-pressure laboratory experiments have revealed a great deal about the general structure and composition of the Earth. For example, such work has shown that the planet's interior structure exists in three layers called the crust, mantle, and core. The outer two layers—the mantle and the crust—are largely made up of silicates, minerals containing silicon and oxygen. Still, the detailed structure and composition of the deepest parts of the mantle remain unclear. These details are important for complex geodynamical modeling that may one day predict large-scale events, such as earthquakes and volcanic eruptions.

Driver notes that even the role that the simplest silicate—silica—plays in the Earth's mantle is not well understood. "Say you're standing on a beach, looking out over the ocean. The sand under your feet is made of quartz, a form of silica containing one silicon atom surrounded by four oxygen atoms. But in millions of years, as the oceanic plate below becomes subducted and sinks beneath the Earth's crust, the structure of the silica changes dramatically," he said.

As pressure increases with depth, the silica molecules crowd closer together, and the silicon atoms start coming into contact with more oxygen atoms from neighboring molecules. Several structural transitions occur, with low-pressure forms surrounded by four oxygen atoms and higher-pressure forms surrounded by six. With even more pressure, the structure collapses into a very dense form of the mineral, which scientists call alpha-lead dioxide.

Driver notes that it is this form of silica that likely resides deep within the earth, in the lower part of the mantle, just above the planet's core. When scientists try to interpret seismic signals from that depth, they have no direct way of knowing what form of silica they are dealing with. They must rely on high-pressure experiments and computer simulations to constrain the possibilities. Driver and colleagues use a particularly high-accuracy, quantum mechanical simulation method to study the behavior of different silica forms, and then compare the results to the seismic data.

In PNAS, Driver, his advisor John Wilkins, and their coauthors describe how they used a quantum mechanical method to design computer algorithms that would simulate the silica structures. When they did, they found that the behavior of the dense, alpha-lead dioxide form of silica did not match up with any global seismic signal detected in the lower mantle. This result indicates that the lower mantle is relatively devoid of silica, except perhaps in localized areas where oceanic plates have subducted.

"As you might imagine, experiments performed at pressures near those of Earth's core can be very challenging. By using highly accurate quantum mechanical simulations, we can offer reliable insight that goes beyond the scope of the laboratory," said Driver. 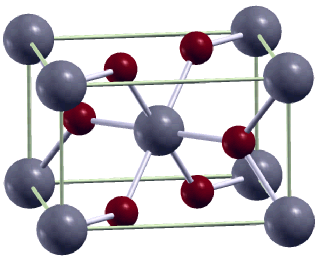 The team's work was one of the first to show that quantum Monte Carlo (QMC) methods could be used to study complex minerals deep in the planet's interior. Although the algorithms have been around for over half a century, Driver notes that applying them to silica was simply too labor– and computer–intensive, until recently.

"In total, we used the equivalent of six million CPU hours to model four different states of silica. Three million of those CPU hours involved using NERSC's Franklin system to calculate a shear elastic constant for silica with the QMC method. This is the first time it had ever been done," said Driver.

He notes that the QMC calculations on Franklin were completed during the system's pre-production phase, before the system was formally accepted by NERSC. During this phase, the center's 3,000 science users were encouraged to try out the Cray XT4 system to see if it could withstand the gamut of scientific demands from different disciplines. Driver notes that the Franklin results allow him to measure how silica deforms at different temperatures and pressures.

"From computing hardware to the consulting staff, the resources at NERSC are really excellent. The size and speed of the center’s machines is something that I don’t normally have access to at other places," says Driver.

"This work demonstrates both the superb contributions a single graduate student can make, and that the quantum Monte Carlo method can compute nearly every property of a mineral over a wide range of pressures and temperatures," said Wilkins. "The study will stimulate a broader use of quantum Monte Carlo worldwide to address vital problems."

He and his colleagues expect that quantum Monte Carlo will be used more often in materials science in the future, as the next generation of computers goes online. Coauthors on the paper included Ronald Cohen of the Carnegie Institution of Washington; Zhigang Wu of the Colorado School of Mines; Burkhard Militzer of the University of California, Berkeley; and Pablo López Ríos, Michael Towler, and Richard Needs of the University of Cambridge.

Portions of this story were adapted from an OSU press release written by Pam Frost Gorder.