NERSC Users Find That Nanodroplets of Water Can Manipulate Graphene

Chemists from the University of Illinois at Chicago using the National Energy Research Scientific Computing Center's (NERSC) Cray XT4 supercomputer, called Franklin have found that nanodroplets of water can be used to shape graphene into complex capsules, sandwiches, knots, and rings to serve as the building blocks of nanodevices with unique mechanical, electrical, and optical properties. 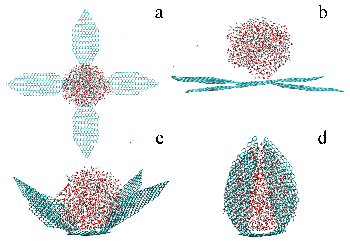 Molecular dynamics simulations reveal that droplets of water cause atomically thin layers of graphite (graphene sheets) to fold up into more compact shapes. Here, a droplet of water causes the 'petals' of a flower-shaped graphene ribbon about 13 nanometres across to fold up around it. (Courtesy of Petr Král, University of Illinois at Chicago)

Graphene, the two-dimensional crystalline form of carbon, is one of the strongest materials ever tested, with a breaking strength 200 times greater than steel. Because electrons blaze through graphene 100 times faster than silicon, scientists believe that it could be used industrially to build faster transistors and computer memory chips, among other things. But until recently, they could not controllably manipulate this robust planar material into arbitrary three-dimensional shapes needed to build many new technologies.

Using molecular dynamics computer simulations generated by supercomputers at NERSC, a team of researchers led by assistant professor of chemistry Petr Král, found that weak molecular interactions called van der Waals forces between water and graphene could shape graphene into a variety of spatial forms, without chemically combining water to the graphene.

"By carefully positioning water droplets and other materials on graphene with special techniques like atomic force microscopy and microscopic needles we can manipulate it. We can shape planar graphene flakes into various three dimensional structures, depending on the size of the water droplet and the shape and size of the flakes," says Král, who was a co-author on the paper highlighted in the December 2009 "News and Views" section of Nature.

He notes that the team's runs on Franklin were vital for testing the algorithm, as well as understanding the boundaries of what could be achieved in laboratory experiments. With the help of two graduate students, Král's ran approximately 150 jobs on Franklin, each using approximately 240 processor hours.

The Nanoletters article was co-authored by UIC graduate student Niladri Patra and by Boyang Wang, who is currently a post-doctoral fellow at China.