It's raining helium on Jupiter—and as these droplets fall towards the planet's deeper interior, they are bringing neon down with them.

This new result, published in the March 26 issue of Physical Review Letters, solves a 15-year-old mystery that was initiated on December 7, 1995, when NASA's Galileo probe plunged into Jupiter's atmosphere and found only one-ninth the amount of neon that should have been there based on measurements of the Sun's composition. The authors, Burkhard Militzer and Hugh Wilson of the University of California, Berkeley, were able to answer this decade-old question with some supercomputing help from the Department of Energy's National Energy Research Scientific Computing Center (NERSC).

Since 1995, astronomers have suspected that neon in Jupiter's interior was dissolving into droplets of condensed helium. However, Wilson notes that the UC Berkeley team was the first to actually test the hypothesis.

"Because the pressures on Jupiter currently cannot be reproduced in a laboratory, we had to rely on computer simulations to determine whether neon would prefer to be dissolved in hydrogen or helium, since these two elements make up the majority of Jupiter," says Wilson. "Our results not only showed that neon atoms prefer to be inside helium droplets, but that the preferences were exactly strong enough to account for the depletion in the planet's atmosphere."

He notes that Jupiter's atmosphere consists of approximately 74 percent hydrogen, 23 percent helium, and less than 3 percent of other elements like carbon, nitrogen, oxygen, neon, etc. In much of the atmosphere, all of these elements are pretty evenly mixed together. However, 10,000 km into the planet's interior, where temperatures are about 5,000 degrees Celsius and the pressure is roughly 2 million times the atmospheric pressure on Earth, hydrogen turns into a conductive metal and helium condenses into drops. The new calculations show that neon atoms have a strong preference for dissolving into the forming helium droplets.

"At this altitude, the pressures and temperatures on Jupiter are so high that you can't tell if hydrogen and helium are a gas or a liquid. They're all fluids, so the rain is really droplets of fluid helium mixed with neon falling through a fluid of metallic hydrogen," says Militzer.

Insights into the Birth of Gas Giants 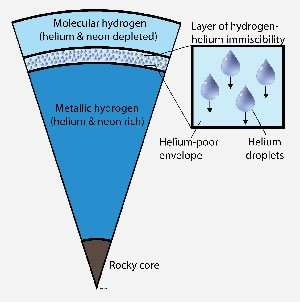 "Although Jupiter is about 4.5 billion years old, our new findings about neon suggest that the planet is still developing. Like a bottle of salad dressing that has been shaken up then left of the counter, the heavier elements are sinking into the planet's core, while the lighter elements are floating to the surface," says Wilson.

Approximately 4.5 billion years ago, Jupiter and Saturn formed out of the same interstellar cloud of gas and dust that collapsed to form the Sun. Therefore, the Sun and the gas on Jupiter should have very similar composition. As asteroids and comets collided with the planet over time, concentrations of elements other than hydrogen and helium became enhanced. The fact that Galileo detected most of these enhanced chemical concentrations in Jupiter’s atmosphere, except for neon, reaffirmed widely accepted theories about Jupiter's formation. But until helium rain, scientists didn't have an explanation for the missing neon.

"We are very grateful to NERSC for providing us with CPU hours in the beginning stages of our research. This time allowed us to run a large number of relatively short runs at a critical stage of our research," says Wilson.

"We only used about 10,000 to 20,000 computing hours at NERSC for this project, but it was very useful. These simulations showed us that science puzzles can also be solved with relatively small allocations," says Militzer.

Militzer is a NERSC user and assistant professor of earth and planetary science at UC Berkeley. Wilson is a postdoctoral fellow at UC Berkeley. The team used both density functional theory and molecular dynamic supercomputer simulations to achieve their result.