Dancing in the Dark

To study nanostructures in real environments, Berkeley Lab scientists have combined theoretical and experimental approaches to glimpse into a protein’s interaction with simple salts in water.  Enabled by x-ray absorption simulation software developed at Berkeley Lab’s Molecular Foundry, these findings shed new light on how salts impact protein structure at the atomic level.

Traditional crystallographic techniques, such as x-ray diffraction, provide a profile of ordered materials with static structures. However, for dynamic or complex systems in which the atomic structure is rapidly changing, more sophisticated methods are needed. Now, Berkeley Lab scientists have applied x-ray absorption spectroscopy to study a model protein, triglycine – a short chain of three molecules of the simplest amino acid, glycine. By simulating this molecule’s x-ray absorption spectrum the team has show how its chain kinks and straightens in response to ions in solution.

“Watching a molecule in solution is like watching a marionette—you can see it bending in response to the making and breaking of hydrogen bonds,” says David Prendergast, a staff scientist in the Theory of Nanostructures Facility at the Molecular Foundry. “A concrete knowledge of how ions influence this behavior comes from using molecular dynamics simulations, which show persistent differences in structure on nanosecond timescales. From this data we can generate x-ray absorption spectra which can then be compared with experimental results.”

In a specialized x-ray absorption experiment called near edge x-ray absorption fine structure (NEXAFS), x-rays are used to probe the chemical bonding and environment of specific elements in a molecule or nanostructure, such as the nitrogen atoms in a triglycine molecule. Coupled with a liquid microjet technology developed at Berkeley Labs, NEXAFS has been previously used to examine how proteins dissolve and crystallize in the presence of various ions .

Prendergast’s software can now simulate NEXAFS data by averaging a series of snapshots taken from a molecular dynamics simulation of a given molecule. This software is a critical tool for interpreting NEXAFS data from complex, dynamic systems, as the probe times in these measurements are too slow—seconds rather than nanoseconds—to reveal structural differences at the nanoscale.

“Previous studies from our group have shown the development of x-ray absorption spectroscopy of liquid microjets provides a new atom-sensitive probe of the interactions between aqueous ions, but it is the advent of this new theory that provides the first reliable molecular-level interpretation of these data,” says Richard Saykally, a Berkeley Lab chemist and professor of chemistry at the University of California at Berkeley. “Here we see this new combination of theory and experiment applied to one of the most important problems in biophysical chemistry.” 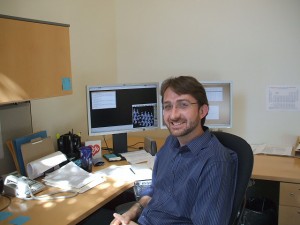 Prendergast says his molecular dynamics technique can be used to model x-ray spectra of a biological system with known structure to determine its local interactions, what causes it to form a particular structure, and why it takes on a particular conformation—all by simulating the spectra of a series of individual snapshots and comparing with experimental results. These simulations are computationally intensive and rely heavily on the large-scale supercomputing infrastructure provided by Berkeley Lab’s National Energy Research Scientific Computing Center (NERSC).

“Although these effects are a fundamental part of nature, they are still poorly understood,” says Craig Schwartz, a researcher working with Prendergast and Saykally, whose graduate work led to this publication. “The experimental sensitivity of NEXAFS, coupled with a breakthrough in theory, gave us new insight into how these molecules interact.”

The researchers anticipate demand from other groups exploring water (or other solvent) interactions, as well as both soft materials (such as polymers) and inorganic materials (oxides and metal surfaces) that are directly relevant to energy-related applications in catalysis, battery technology and photovoltaics. In addition, as x-ray free electron laser sources become available to scientists, a richer experimental data set will be available to augment theoretical findings.

A paper reporting this research titled, “Investigation of protein conformation and interactions with salts via X-ray absorption spectroscopy,” appears in Proceedings of the National Academy of Sciences. Co-authoring the paper with Schwartz, Prendergast and Saykally were Janel Uejio, Andrew Duffin, Alice England and Daniel Kelly.

This work at the Molecular Foundry and Advanced Light Source was supported by DOE’s Office of Science. Computational resources were provided by NERSC, a DOE advanced scientific computing research user facility.

The Molecular Foundry is one of the five DOE Nanoscale Science Research Centers (NSRCs), national user facilities for interdisciplinary research at the nanoscale, supported by the DOE Office of Science.  Together the NSRCs comprise a suite of complementary facilities that provide researchers with state-of-the-art capabilities to fabricate, process, characterize and model nanoscale materials, and constitute the largest infrastructure investment of the National Nanotechnology Initiative.  The NSRCs are located at DOE’s Argonne, Brookhaven, Lawrence Berkeley, Oak Ridge and Sandia and Los Alamos National Laboratories.

Berkeley Lab is a U.S. Department of Energy national laboratory located in Berkeley, California. It conducts unclassified scientific research and is managed by the University of California.

Learn more about the research of David Prendergast.