Figure 1. In this model galactic plane (seen in cross section), the energy input of stellar superclusters causes gases to shoot out at speeds up to 1000 kilometers per second at temperatures reaching 100 million Kelvin. These appear as plumes or "chimneys," visible in the top three frames (showing density, temperature, and velocity; the bottom frame shows gas column density). Small bubbles of hot gas in the field (visible in the top two frames) are the result of stellar feedback from runaway stars.

Astronomers have in recent years been surprised to find hulking brutes among the baby galaxies of the early Universe. Studded with bright, giant clumps of rapidly forming stars, these big galaxies hail from a time when the cosmos was less than 4 billion years old, yet each contains about the mass of a modern Milky Way, which took 10 billion years to form.

Once considered oddities, these galaxies are now thought to be the engines that drove the Universe's most active period of star formation. It remains a mystery, however, how such massive galaxies came to be so quickly and what has happened to them in our modern Universe. Attempts to model the evolution of these so-called star-forming galaxies (SFGs) have failed. When modelers feed gas into a typical galaxy simulation at the high rates required for an SFG, the resulting galaxy can be misshapen or form too many stars too quickly, or both.

"There have been a lot of problems trying to understand galaxies. In fact, there are many aspects of galaxies that are still quite mysterious," said Joel Primack of the University of California, Santa Cruz, who is the principal investigator for the Galaxy Formation Simulation project that computes at NERSC. His group uses computer simulations and visualizations to explore questions about the structure, nature, and fate of the cosmos.

One of the team, Daniel Ceverino, may have cracked the SFG case. Zeroing in on single galaxies with high-resolution simulations and compensating for the effects of supernovae and runaway stars, Ceverino successfully simulated SFG-like galaxies using NERSC's Bassi system.

"These are the best physics, highest resolution simulations anyone has run to date of forming galaxies," said Primack, who helped originate cosmology’s standard model (Lambda Cold Dark Matter) under which simulations are run. "The Bassi machine at NERSC has been one of the best machines available for doing that kind of simulation," he added.

Ceverino of The Hebrew University, Jerusalem and collaborator Anatoly Klypin of New Mexico State University outlined their groundbreaking simulations in The Astrophysical Journal. In a second paper published in the same journal, Avishai Dekel, Re’em Sari and Ceverino, all of The Hebrew University, Jerusalem, used the simulations to explore a theory for how these unusual galaxies formed.

The Secret Lives of Galaxies

According to the cold dark matter model, a web of mysterious dark matter underpins the visible Universe. Galaxies form when the gravity of dense dark-matter knots snags streams of relatively cold gases (approximately 10,000 Kelvin). Compressed by gravity, the gases fuel star creation. Massive stars, in turn, slow the formation of additional stars by injecting energy, mass, and metals back into the galaxy-formation process through stellar winds and supernova explosions—a process called stellar feedback. 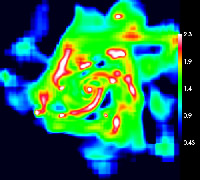 Figure 2. This simulated galaxy is smaller than the typical star-forming galaxy, but it resembles an SFG's appearance and demonstrates the general behavior predicted by theoretical analysis. In the face-on view (bottom) the extended disk is broken into several giant clumps and sheared perturbations, similar to many observed star-forming galaxies. The edge-on view (top) shows a well-defined disk, resembling observed “chain” systems. The disk is fed by streams, which are largely below the threshold density for the plot and so are not emphasized in these pictures.

Because of the large scale and subsequent low resolution of many simulations, however, stellar feedback has been poorly accounted for in typical models, especially the feedback of runaway stars. Runaway stars are massive stars ejected from their natal molecular clouds by gravitational effects. A dramatic, though uncommon example would be when one of a binary pair goes supernova: losing the mass to hold its partner in co-orbit, it slings the other star out into space. Outside the damping effects of a giant molecula cloud, about 10 percent of runaway stars themselves explode as supernovae. The energy released from runaway supernovae ripples out for hundreds of light years, increasing their impact on galaxy formation.

Ceverino, a PhD candidate at New Mexico State University at the time, and Klypin, his advisor, adjusted their simulations to account for the feedback effects of both massive star clusters and runaway stars. Testing the changes on a galactic plane with a volume of 4,000 parsecs on a side (1 parsec = 3.26 light years), the researchers successfully reproduced the characteristics they expected of stellar feedback: chimneys of fast, hot outflows of gas, and smaller, hot gas bubbles (Figure 1) resulting in galactic winds.

Using the adjusted simulation, Ceverino and Klypin then modeled three massive galaxies at "high redshift." Astronomers measure the distance (and thus the age) of galaxies based on how much their once-blue light has stretched, shifting it into the red spectrum. The redder the light, the higher the redshift value, the further away (and the longer ago) is an observed galaxy.

Unlike previous models, the galaxies in the adjusted simulation looked very much like the star-forming galaxies astronomers observe (Figure 2). Instead of smooth, large central bulges, their visualizations formed thickened disks with clumpy arms, much like SFGs (Figure 3).

The simulations also supported the theories of astronomer Avishai Dekel, who had proposed in a January 2009 Nature article an explanation of how SFGs form. If incoming gas streams could remain "cold" (about 10,000 Kelvin) and stream continuously into the galaxy core, Dekel proposed, SFGs could form. Ceverino's models showed streams of cold, often clumpy gas streams feeding early-stage galaxies.

The models also suggest that these wild, violent galaxies may have settled down considerably in the space of a few billion years. In the simulations, star-forming clusters make a few galactic rotations before being drawn into a central bulge, which slows star formation and "quenches" galaxy growth. Cranking up the resolution was key. Lower-resolution simulations didn't properly account for stellar feedback. At resolutions poorer than 50 parsecs, the models lost resemblance to observed galaxies. Ceverino ran simulations at resolutions high as 35 parsecs, ten times that of typical simulations.

On both cosmological and computational scales, that's unusually fine. Our own Milky Way galaxy measures 30,000 parsecs across. At the finest resolutions, these galactic models were imaging only portions of a single galaxy. "If you're doing simulations that fine, then you can resolve the regions where stars form, though not the individual stars themselves," Primack said. 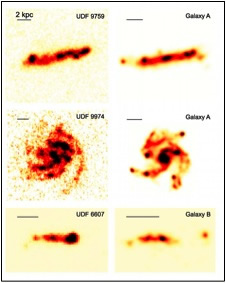 Figure 3. Models of simulated high-redshift galaxies (on the right) are compared to three galaxies observed by the Hubble Ultra Deep Field (shown left). The modeled galaxies for the first time reproduce key morphological properties of high-redshift (ancient) galaxies, including clumps of rapidly forming stars, indicated by black in these false color images.

The models may also help scientists finally identify some of the oldest and most mysterious cosmic structures ever observed: Lyman-alpha blobs. Primack and colleagues are exploring whether these glowing globs of gases may actually be evidence of the cosmic streams that fed SFGs. Ceverino's close-up, high-resolution models will also help increase the accuracy of larger-scale simulations aimed at understanding how dark matter and visible, or baryonic, matter interact.

"Nobody has the computer power or the understanding of underlying physics to try to do everything in one go," said Primack. "We learn what we can from the small-scale simulations and extend that up to larger-scale models."

The Next Challenge: Black Holes

Meanwhile, Ceverino's simulations have reached 6.2 billion years, almost half the age of the Universe, and continue to run at NERSC. The Bassi system is set for early 2010 decommissioning, but his work will continue on the Franklin (Cray XT4) and Hopper (Cray XT5) systems. Primack's group may also test this and other codes on NERSC's Magellan, a scientific cloud computing testbed.

Primack's next challenge is to incorporate the effects of black holes found at the center of massive galaxies into models. "Black holes are 1,000 times more effective than stars at releasing energy from matter, so there's no doubt these black holes play a huge part in galaxy formation," said Primack.