Lasers without Mirrors, Designed by Supercomputer

Sometimes it takes a big machine to understand the tiniest details.

That’s the case with free electron lasers (FELs). The powerful X-rays they generate can probe matter directly at the level of atomic interactions and chemical-bond formation, letting scientists observe such phenomena as chemical reactions in trace elements, electric charges in photosynthesis and the structure of microscopic machines. FELs have the potential to address a host of research challenges in physics, chemistry and material and biological sciences.

[Select above image to zoom in]. To generate a free electron laser, electrons are accelerated and made to emit X-ray light. A free electron laser (FEL) starts with low-energy electrons from an electron gun, at left. The injector manipulates the electron bunches in their phase space distribution and accelerates them to boost each particle’s energy. A “laser heater” controls the energy spread in the beam. A superconducting continuous wave (CW) linear accelerator (linac 1) provides another energy boost. A harmonic cavity linearizes the correlated energy spread, allowing a bunch compressor to produce short, uniform electron bunches. A second linac accelerates the bright electron bunches to high energy. The high-energy beam passes through undulators – a series of alternating magnets – which induce the electrons to radiate light. The electrons exchange energy with the electric field of this light, resulting in “microbunching,” in which the electrons cluster at a scale equivalent to the wavelength of the generated light. The light waves then line up at close to the same phase, tremendously enhancing the intensity. The resulting X-ray light is configured to optimize qualities such as wavelength, pulse duration and polarization, and delivered to beam lines and end stations which house experiments.

FELs share many optical properties with conventional lasers. The main difference: In conventional solid-state and gas  lasers, electrons are bound and bounce off mirrors. FELs enlist an electron beam that moves freely through an oscillating magnet, accelerating the electrons to near light speed, where they release photons. By using free electrons and eliminating mirrors, FELs produce coherent light at wavelengths shorter than conventional lasers – at the X-ray scale.

To succeed, FEL designs must be optimized to produce and preserve high-brightness electron beams, characterized by high current and “low emittance,” or when particles are bunched and move together. At the Department of Energy’s Lawrence Berkeley National Laboratory (LBNL) a team of researchers is using high-performance computers to shed light on these designs.

A billion points of flight

Using code he wrote for use on Franklin, the Cray XT computer at DOE’s National Energy Research Scientific Computing Center (NERSC) at LBNL, staff scientist Ji Qiang, John Corlett, head of LBNL’s Center for Beam Physics, and colleagues will model 1 billion electrons as they pick up speed in a linear accelerator, or linac. Another computer code will track these electrons through an X-ray FEL.

Qiang and his co-investigators will simulate evolution of the electron beam from its origin to its fate as a photon source. He and four other LBNL scientists will scrutinize the model for phenomena that can hamper beam quality.

“To build a next-generation X-ray FEL source, we need a better understanding of beam dynamics,” Qiang says. And that requires supercomputing to model “multiple billion electrons through the different accelerator stages and track the details.”

Franklin, Qiang says, will give the researchers computer power that can run their model at 10 times the time, space and energy resolution of previous machines. This graph compares large-scale simulations of particle beam distribution, including energy deviation, with an ideal distribution that removes complicating factors. A large-scale simulation (the green line, showing 1 billion numerically simulated particles called macroparticles) is required to predict beam distribution at the end of a free electron laser system. The lower the energy deviation, or dE/E, the better the beam quality and the more coherent the photons produced. By comparison, the red line for a simulated beam of 10 million macroparticles shows a sketchier outcome. The blue line represents the ideal beam distribution, in which all complicating factors that affect beam quality are removed: SC, or the space-charge effect, in which particles interact with each other; and CSR, or coherent synchrotron radiation, in which electromagnetic radiation is generated by electrons passing through bended structures. Researchers will have to account for SC and CSR when they design the instrument.

The big machine will simulate “all electrons, capture the details of the microstructure of the electron bunch (and) inside the the accelerator and encode the interaction among the electrons,” he says. “Our results can help improve the state of the art of next-generation light-sources design.”

The group will work with a grant of 800,000 processor hours from the Department of Energy’s Innovative and Novel Computational Impact on Theory and Experiment (INCITE) program. It will study a new electron beam delivery system for X-ray FELs and the movement and behavior of electrons in the linac.

“This will be an exquisitely detailed, multiphysics model,” Corlett says. “It should reveal a lot.”

Qiang says the INCITE project provides him and his team with top hardware and dedicated computing time to design and optimize the delivery transport system for a high-brightness beam that can produce coherent radiation in FEL light sources. The computing power and the many hours of access enable the team to carry out unprecedented high-statistical beam dynamics simulations to model the shot noise, or electron current fluctuations, inside an electron beam. Accurate modeling of shot noise is important for predicting the final beam quality.

“This computing resource also enables us to do detailed parameter design studies using large-scale simulations to optimize the beam delivery system to achieve the best final beam quality,” Qiang says. “Besides the computing resource, we’ve also received support from the consult team and visualization team at NERSC, which helps us run the simulation smoothly and better understand the simulation results. Overall, the INCITE project is crucial for the success of the beam delivery system optimization for the future FEL light source design.”

An X-ray FEL starts with high-energy bunches of electrons passing through undulators – essentially an array of alternating magnets. As they pass through the undulators, the electrons radiate light, which engulfs the electrons.

As they wiggle around the magnetic field of the undulators, the electrons exchange energy with the electric field of this light. The end result is a “microbunching,” in which electrons cluster at a scale equivalent to the wavelength of the generated light.

As microbunching begins, light waves the electrons generate line up close to the same phase – that is, the highs and lows of the waves’ electromagnetic field overlay each other, enhancing the light’s intensity by many orders of magnitude.

As in a standard laser beam, light emerging from the FEL is highly collimated – the rays are parallel – and have a narrow bandwidth, but it’s also at wavelengths in the X-ray scale. The coherent light that emerges from a FEL is more than a billion times more intense than the spontaneous light produced in a normal undulator.

The issues the LBNL group wants to understand start at the front end of the linac system: the injector. That’s where a conventional laser hits photo-conducting materials on a specially treated surface, liberating electrons. The linac boosts the electrons to increasingly higher energy and momentum levels.

“We want not only high energy but also a very good beam quality,” Qiang says. “Most of the electrons accelerated need to have the same momentum within a small volume. That’s a perfect scenario, which in reality is impossible to get. If they are of varying energy or momentum, they will radiate differently, and we won’t get a good photon quality for the beam. We want the electrons to radiate coherently.”

Imagine electrons in a bunch shaped like a cigar, Corlett says. In the envelope of the cigar are these billion electrons, each moving in a certain direction, so that at any given instant an electron is in the bunch middle, edge, front or back, and also has an angle. This position and angle can be used to describe the overall beam quality. 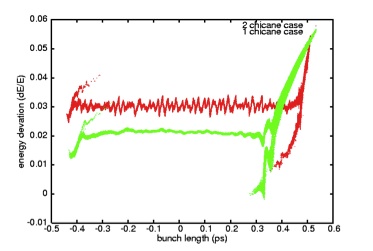 “What you would like ideally is all the electrons to have positions within a circular cross-section of this cigar, with all of the angles the same, all moving exactly in the same direction and at the same speed,” Corlett says. It’s Qiang’s perfect scenario: The electrons in a bunch would have no emittance – an angular spread of zero.

That’s unrealistic, Corlett says, “but for our applications you always want a low-emittance beam.” Developing designs with low emittance is one of the simulation project’s goals.

The project will model a new linear accelerator system supporting 10 undulators directing 10 distinct electron beams to 10 distinct X-ray FELs. In the accelerator, a magnet squeezes the electron bunches from lengths in the millimeter range down to microns, so that “when it radiates it will be a very coherent light source,” Qiang says.

As they pass through the undulators, the electron bunches radiate X-ray photons at wavelengths that can be changed continually – an important quality for many X-ray FEL applications. The undulator induces the wiggling motion that produces lasing – coherent radiation.

“In conventional laser systems, the mirror fixes the wavelength,” says Qiang. “In this next-generation system, the photon energy comes from the kinetic energy of the electrons. We can change the energy of electrons and thus tune the wavelength of light. That’s tunability. In this system, the photon output is an order of magnitude higher than the previous generation, and we can control the shape of electron bunches and ultimately the shape of photons.”

Downstream, the electron bunches go to what is called the “switchyard” for distribution to the 10 FELs.

“Imagine a railway switchyard where you can shunt boxcars onto different branch lines,” Corlett says. “This switchyard is a collection of pulsed electromagnetic kickers and magnets that selectively places each bunch onto a different set of magnets that guides it to a dedicated FEL.”

The LBNL simulation will take every one of the 1 billion electrons through its paces. Qiang, Corlett and their collaborators will use the model to better understand details of physical effects.

Space charge is one important effect the code models. “Each electron experiences an electrostatic field generated by the other electrons in the bunch, and that gets cancelled out at higher energies by the magnetic field that is generated by moving charges,” Corlett says.

“The electrons very much feel the influence of the surrounding electrons’ fields, and of course they repel each other, so the bunches are trying to explode. All of the electrons want to be as far away from each other as possible. We want to model this phenomenon very carefully.”

“As the bunch radiates, electrons lose energy and the radiation can move forward and interact with other electrons in the bunch and cause them to lose or gain energy, so this effect can really perturb the energy distribution in a bunch,” Corlett says.

“We’re very concerned about this. The high resolution modeling that Ji does is critical toward understanding all of these different effects.”

This story was originally published in ASCR Discovery.