As NERSC moves to allocate more resources to larger jobs, researchers are making greater use of the opportunity to run on more processors and combine this with NERSC's well-established reliability.

In March, Connor Ballance, of Rollins College, a research scientist within a collaborative research effort between Rollins College, Auburn University, and Oak Ridge National Laboratory, undertook a large R-matrix scattering calculation on this iron ion. He used 4,096 processors for a twelve-hour period to calculate a total of 9,591 electron-impact excitations, at hundreds of thousands of electron energies. Such a calculation would be intractable on any machine available to this group, other than Seaborg, according to Ballance.

"We simply could not have completed this calculation in a reasonable amount of time." Ballance said.

From a fusion perspective, this research is important for the design of a fusion reactor. Since reactor walls are made of metal, the intense energy inside the reactor will eject atoms from the walls, and once inside the plasma, collisions of free electrons with these atoms can cause ionization (the removal of bound electrons) and excitation (the promotion of the bound electrons to higher energies). The calculation described here is on a particular iron ion, which would be expected to be present, in any fusion devices with steel in the reactor walls. 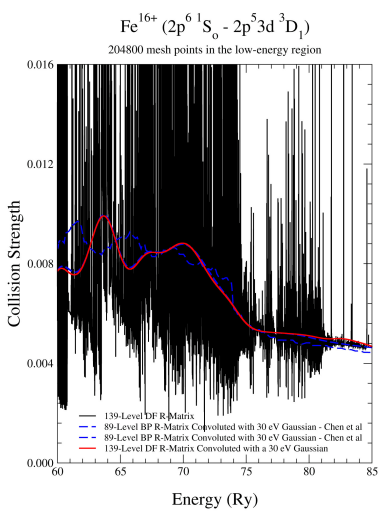 This graph for a particular excitation of this sixteen times ionized species of iron illustrates the complex resonance structure involved in many of the 9,591 excitations studied. It has also been numerically averaged over a wider energy range to more clearly illustrate the enhancement of the probability of excitation due to resonances.

Metal ions act as impurities in the plasma, which must be heated to extreme temperatures in order to achieve fusion. When electrons in the plasma collide with ions of impurity atoms, there is a certain probability that they will be excited to higher energy states. After excitation, they will relax to lower energy states and emit the excess energy as electromagnetic radiation, primarily in the X-ray region. Such radiation from impurities is the primary energy loss mechanism inside a fusion plasma. If enough energy is lost through X-ray radiation, the plasma will never reach the temperature necessary for fusion to occur. To understand and prevent this, researchers must develop collisional-radiative models based on accurate electron-impact excitation calculations.

However, applications of this research go beyond fusion; it is also directly applicable to the diagnostics of astrophysical plasmas. In the particular iron ion considered in the present calculation, 16 of its 26 electrons have been removed, leaving it in a state that is stable over a relatively wide temperature range. Therefore it is very useful for diagnostics of both fusion and astrophysical plasmas. However, discrepancies exist between the observed intensities ratios of the X-rays emitted from this ion of iron and those determined from previous theoretical calculations. Since these ratios are critical to the determination of density and temperature in both astrophysical and laboratory plasmas, an attempt to understand these discrepancies is quite important.

This particular calculation employed a suite of parallel programs developed primarily at Rollins College for the determination of electron-impact excitation and ionization. They employ a theory referred to as the R-matrix method, which has been used in a variety of serial computer programs, and is particularly well suited to systems such as this iron ion in which the probability is dominated by complex resonance structures. These resonances are due to the colliding electron being temporarily captured by the ion, before being re-emitted; they are very narrow in electron energy and must be calculated at many thousands of energies in order to obtain accurate results. The resonance structures can in turn have a pronounced effect on the intensity of emitted X-rays, and this is a possible source of the discrepancy between experiment and theory.

At each electron energy, the calculation took five to 10 minutes, and over the course of the run, each processor on Seaborg calculated results at 50 different energies. The calculation was distributed over processor by energy in order to achieve the best load balance between processors. 204,800 energies were calculated during the 12-hour run.

“At NERSC, our research group uses the available ScaLapack and essl libraries to add further performance to our existing codes, and also gets support from the NERSC User Services Group. The NERSC staff provide a robust supercomputing environment", Ballance said. "They have offered advice about I/O issues beyond Seaborg that have proved to also work on our local Beowulf cluster."