BERKELEY, Calif.—Computational and combustion scientists at the U.S. Department of Energy's Lawrence Berkeley National Laboratory have earned national recognition in the July 19, 2005 Proceedings of the National Academy of Sciences with their cover article about unparalleled computer simulations of turbulent flames. 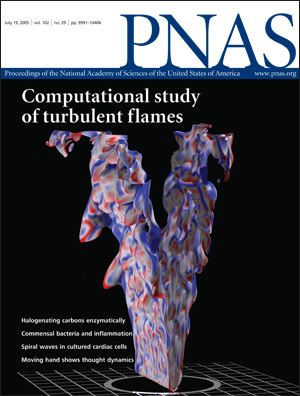 The research by scientists in Berkeley Lab's Center for Computational Sciences and Engineering and in the Environmental Energy Technologies Division has led to a three-dimensional combustion simulation of unmatched size without resorting to models for turbulence or turbulence-chemistry interactions. The article shows that the simulation closely matches a combustion experiment.

Gaining a better understanding of combustion, which powers everything from automobiles to aircraft to power generating plants, can help improve the efficiency of those systems as well as help reduce the amount of pollution produced by burning fossil fuels.

“Although collaborations between computational scientists and experimentalists are becoming increasingly common, the results from this project clearly demonstrate how scientific computing is coming into its own as an essential component of scientific discovery,” said Horst Simon, Associate Laboratory Director for Computing Sciences at Berkeley Lab. “The simulation is unprecedented in several aspects—the number of chemical species included, the number of chemical processes modeled, and the overall size of the flame. This is truly breakthrough computational science.”

The LBNL combustion simulations use a different mathematical approach than has been typically used. Most other combustion simulations without turbulence models use equations that include sound waves, making them very computationally expensive. Because of this, such simulations often have been limited to only two dimensions, to scales less than a centimeter, or to just a few carbon species and reactions. By contrast, the LBNL researchers have modeled a three-dimensional flame about 12 cm high and consisting of 19 chemical species and 84 fundamental chemical reactions, producing results that could be compared directly with experimental diagnostics.

The LBNL group has developed an algorithmic approach that combines the “low Mach-number equations,” which remove sound waves, with “adaptive mesh refinement” (AMR). The combined methodology strips away relatively unimportant aspects of the simulation and focuses computing resources on the most important processes. Developed with the support of the Applied Mathematics Program of the DOE Office of Advanced Scientific Computing Research, the group's algorithms have slashed computational costs for combustion simulations by a factor of 10,000. Even so, the combustion simulation required substantial computing power—the simulation ran for about 1,000 hours on 256 processors of the IBM SP supercomputer at DOE's National Energy Research Scientific Computing Center (NERSC).

The collaboration between computational and combustion scientists described in the National Academy Proceedings was supported by the Applied Partial Differential Equations Center (APDEC) of DOE's Scientific Discovery through Advanced Computing (SciDAC) program. The combustion experiments were supported by DOE's Office of Basic Energy Sciences in the Office of Science. The work also received support from Cristina Siegerist and Wes Bethel of LBNL's Visualization Group.

Researchers and institutions with a subscription to the Proceedings of the National Academy of Sciences can access the paper at http://www.pnas.org/cgi/content/short/102/29/10006.