When Stephen Lau of NERSC’s networking and security created a graphical display to highlight the many  malicious scans and threats lurking in cyberspace, he christened it the “Spinning Cube of Potential Doom.” Developed to increase awareness of the level of malicious traffic on the Internet, the Cube is a visual display of network traffic collected using the Bro Intrusion Detection System developed by LBNL’s Vern Paxson. Bro monitors network links, searching for traffic that potentially violates a site’s access and usage policies. 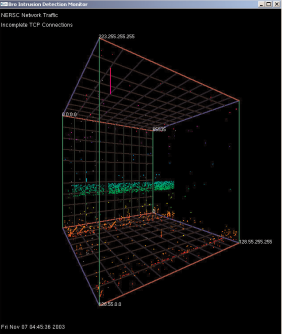 “Although there are many tools available for displaying network traffic and potential security incidents, the vast majority of these tools are developed by network and security professionals for network and security professionals,” Lau writes in the Perspective column of the June 2004 issue of Communications of the ACM. “The Cube attempts to display the overall level of malicious traffic in a fashion that can be easily understood by those without a computer security or networking background.”

And it works. The Cube debuted at the SC2003 conference in Phoenix and the large display attracted a steady audience of onlookers. Many of those pausing to watch seemed surprised at the level of malicious traffic on the Internet.

Here’s a description of the Cube’s data display from Lau’s column, which also rated a mention on slashdot.org.

“The vast majority of colored dots can be considered to be malicious traffic searching for potentially vulnerable systems. A high number of connection attempts can be seen at the low end of the port range (0-1024), representing attempts to locate enabled well-known services (i.e. http, ssh, etc). Although some of these attempted connections can be explained by misconfigured applications or hosts that have inadvertently crashed and are no longer listening for connections, the patterns that emerge from the data shows that these ‘false positives’ are most likely in the minority."