The SSPX at Lawrence Livermore

In pursuing the potential of fusion energy, experimentalists try to understand precisely what is going on inside the fusion plasma so they can tune the system to improve the conditions that would lead to a sustained reaction within the heated plasma. If the temperature can be kept high enough and the energy contained, net power can be produced.

A major problem is that determining exactly what is happening inside a fusion plasma is very difficult experimentally. A conventional probe inserted into the hot plasma is likely to sputter and contaminate the plasma, leading to a loss of heat. Experimentalists must use nonperturbative diagnostics, e.g., laser scattering, and measurements with probes and magnetic loops around the edge of the plasma to deduce the plasma conditions and the magnetic field structures in the interior of the plasma.

An important aid to the experiments is work undertaken with computational scientists to create detailed simulations of fusion plasmas. That's what scientists working on the Sustained Spheromak Physics Experiment (SSPX) at Lawrence Livermore National Laboratory have done in collaboration with researchers at the University of Wisconsin-Madison. 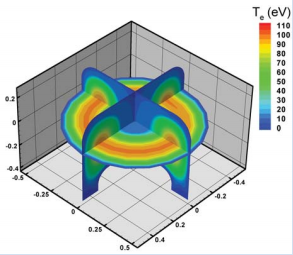 This partial-drive simulation, part of a simulation of the evolution of conditions inside the spheromak, shows that peak tempera- ture of 98.8 eV occurring at 1 millisecond into the simulation.

The resulting simulations produced using the NIMROD code on NERSC's Seaborg supercomputer are very close to the observed results from actual runs on SSPX, giving the researchers confidence in the accuracy of the simulations and increased understanding of the physics in the spheromak.

"These simulations are very important for supporting our experiments," said LLNL's Bruce Cohen, who has been computing at NERSC and its predecessors since the earliest days of the center. "The experimental team has been upgrading the capacitor bank used to drive the reactor, and our simulations confirm how careful tuning of the current pulses can improve plasma performance, such as achieving higher temperatures."

Cohen presented some of the group's latest results in an invited talk at the 2004 annual meeting of the American Physical Society's Division of Plasma Physics, held Nov. 15-19, 2004. In a close collaboration led by Carl Sovinec of the University of Wisconsin-Madison, the Wisconsin-LLNL group recently had a paper accepted for publication by Physical Review Letters.

While the principal magnetic fusion approach focuses on the tokamak, fusion energy scientists are also revisiting the spheromak and other alternative concepts for attaining magnetic fusion. The SSPX spheromak at LLNL is a series of experiments designed to determine the spheromak's potential to efficiently create and confine hot fusion plasmas. The systems differ in that the tokamak's magnetic fields are generated by large, external magnetic coils surrounding the doughnut-shaped plasma (which make the tokamak more complex and expensive), while spheromaks confine hot plasma in a simple and compact magnetic field system that uses only a small set of external magnet coils. The necessary strong magnetic fields are generated inside the spheromak plasma by plasma currents and what's known as a magnetic dynamo.

A spheromak can be formed and sustained by injecting magnetic helicity and energy from a magnetized coaxial plasma gun (powered by a capacitor bank) into a conducting shell or flux conserver. Although the physical spheromak design is simple, its dynamo activity produces plasma behavior that is extremely complex and more difficult to predict and control than that found in tokamaks.

"How high a temperature you can achieve and how well you can hold that heat in the plasma are two of the key points on the short list of things you want to understand and optimize in a fusion device," Cohen said. "Minimizing the energy leakage rate relaxes the requirements on how much energy you need to put into the fusion plasma to drive it and makes it easier to achieve sustained thermonuclear reactions." With recent changes to their code, the Wisconsin-LLNL collaboration has created simulations with temperature histories  measured in milliseconds  that are closer to the temperature histories observed in experiments. This follows the group's prior success in simulating the magnetics of the experiment. "We have the magnetic history captured pretty well," Cohen said. "Energy confinement is closely coupled to the detailed magnetics." 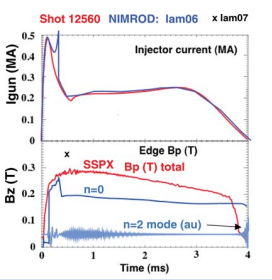 These graphs illustrate the improved match of NIMROD simulations (in blue) with results from an actual experiment (in red).

Plasma and energy confinement in the spheromak is quite sensitive to the quality and symmetry of the magnetic field lines. As long as the plasma and its confining magnetic field remain relatively axisymmetric with a large volume of closed, nested magnetic flux surfaces, a hot fusion plasma can be confined away from the walls of the device, and a high temperature can be maintained. However, due to magnetohydrodynamic (MHD) instability, small fluctuations and islands develop in the magnetic fields. This disrupts the axisymmetry, undercutting the confinement of the plasma and allowing heat loss. Finding ways to eliminate the magnetic fluctations and the associated islands would allow the experimenters to improve the energy and plasma confinement, and thereby increase the operating temperature.

"The simulations support experimental findings that controlling magnetic fluctuations is central to improving the quality of the magnetic flux surfaces and the energy confinement," Cohen noted in his talk at the APS meeting.

Future work will also address controlling magnetic fluctuations with a conducting insert along the geometric axis and additional physics improvements to the simulation model.

"We really need supercomputer resources to do these kinds of simulations, which involve massive calculations," Cohen said. Although the simulations cover only four milliseconds in physical time, there are of order 105 time steps involved in the simulations. As a result, the group ran each of their simulations in 50 to 80 shifts of 10 to 12-hour each on Seaborg, consuming more than 30,000 processor hours in each complete simulation; and multiple simulations were needed.