‘Recovering Scientist’ Calls it a Day When Mark Day came to the National Energy Research Scientific Computing Center (NERSC) at Lawrence Berkeley National Laboratory (Berkeley Lab) five years ago, “I found my tribe,” he said. This month the self-proclaimed “recovering scientist” retires from a 30-plus year career with the University of California (UC) system, including his years at NERSC.

Day’s UC career began in 1982 as a Ph.D. student in pharmaceutical chemistry. As part of his research, Day applied nuclear magnetic resonance spectroscopy for solving peptide structures. This led to subsequent work in the Department of Radiology at UC San Francisco (UCSF) where he applied magnetic resonance imaging (MRI) in novel ways, coaxing data from digital images created for clinical use. “I loved the science, but really became enamored with the computing,” Day said. “Plus, I was just really good at building the tools for doing the computer analysis, so I shifted into that work.”

Over his years at UCSF, Day moved into administration, a role in which he “found little joy.” So, when he took a position in the Infrastructure Services Group (ISG) at NERSC, he felt he’d come home. “There are actually a lot of us recovering scientists at NERSC,” said Day. “I assume that it's kind of the same attraction for us all: We still like being involved in science and the challenge of helping others do their work using computing tools available to us.” 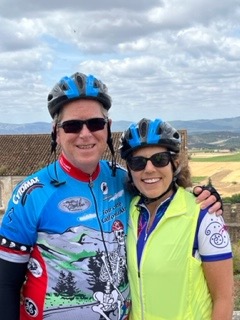 During his tenure at NERSC, Day is proud to have been part of the team that implemented Spin, a “container” system that lets scientists easily stand up and share technological tools, like websites, databases, and data analysis tools. “I think NERSC is kind of famous for removing friction from science, and Spin is a great example of that.”

He also cited the recently rolled out Federated Identity project, which allows scientists to access NERSC systems and resources through their home institutions' logins. “I always felt like we're part of a pretty strong team at NERSC, so all the things I’d like to cite are really team accomplishments,” he said.

“We are extremely fortunate to work with colleagues of Mark’s caliber,” said ISG Group Lead Cory Snavely who hired Day in 2017. “He’s not only a brilliant technologist, but he’s also articulate, generous, and has a fantastic sense of humor. Mark played a pivotal role in all of the group’s projects, and especially with our Federated Identity initiative, but he also made the work enjoyable,” Snavely said.

Day said he will miss the people he works with and the intellectual challenges of supporting science. “Whether figuring out how to apply a new technology or attending a seminar to learn some of the science behind detecting dark matter, I was constantly challenged at NERSC. I think that's going to be hard to replicate in retirement.”

Still, he is looking forward to “doing all those things you think you are going to do but never seem to have time for,” including traveling with his wife Amy, biking, backpacking, and completing some long-neglected household projects.