The ‘Little’ Computer Cluster That Could

PDSF, which switched off in April, had a storied history in serving HEP and NP experiments 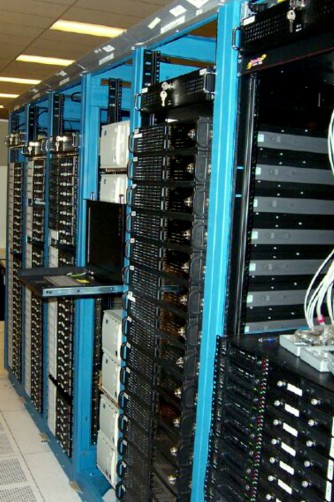 Decades before “big data” and “the cloud” were a part of our everyday lives and conversations, a custom computer cluster based at the Department of Energy’s Lawrence Berkeley National Laboratory (Berkeley Lab) enabled physicists around the world to remotely and simultaneously analyze and visualize data.

The Parallel Distributed Systems Facility (PDSF) cluster, which had served as a steady workhorse in supporting groundbreaking and even Nobel-winning research around the world since the 1990s, switched off last month.

During its lifetime the cluster and its dedicated support team racked up many computing achievements and innovations in support of large collaborative efforts in nuclear physics and high-energy physics. Some of these innovations have persevered and evolved in other systems.

The cluster handled data for experiments that produce a primordial “soup” of subatomic particles to teach us about the makings of matter, search for intergalactic particle signals deep within Antarctic ice, and hunt for dark matter in a mile-deep tank of liquid xenon at a former mine site. It also handled data for a space observatory mapping the universe’s earliest light, and for Earth-based observations of supernovas.

It supported research leading to the discoveries of the morphing abilities of ghostly particles called neutrinos, the existence of the Higgs boson and the related Higgs field that generates mass through particle interactions, and the accelerating expansion rate of the universe that is attributed to a mysterious force called dark energy.

Some of PDSF’s collaboration users have transitioned to the Cori supercomputer at Berkeley Lab’s National Energy Research Scientific Computing Center (NERSC), with other participants moving to other systems. The transition to Cori gives users access to more computing power in an era of increasingly hefty and complex datasets and demands.

"A lot of great physics and science was done at PDSF,” said Richard Shane Canon, a project engineer at NERSC who served as a system lead for PDSF from 2003-05. “We learned a lot of cool things from it, and some of those things even became part of how we run our supercomputers today. It was also a unique partnership between experiments and a supercomputing facility – it was the first of its kind.”

PDSF was small when compared to its supercomputer counterparts that handle a heavier load of computer processors, data, and users, but it had developed a reputation for being responsive and adaptable, and its support crew over the years often included physicists who understood the science as well as the hardware and software capabilities and limitations.

“It was ‘The Little Engine That Could,’” said Iwona Sakrejda, a nuclear physicist who supported PDSF and its users for over a decade in a variety of roles at NERSC and retired from Berkeley Lab in 2015. “It was the ‘boutique’ computer cluster.”

PDSF, because it was small and flexible, offered an R&D environment that allowed researchers to test out new ideas for analyzing and visualizing data. Such an environment may have been harder to find on larger systems, she said. Its size also afforded a personal touch.

“When things didn’t work, they had more handholding,” she added, recalling the numerous researchers that she guided through the PDSF system – including early career researchers working on their theses.

She noted that because the PDSF system was constantly refreshed, it sometimes led to an odd assortment of equipment put together from different generations of hardware, in sharp contrast to the largely homogenous architecture of today’s supercomputers. 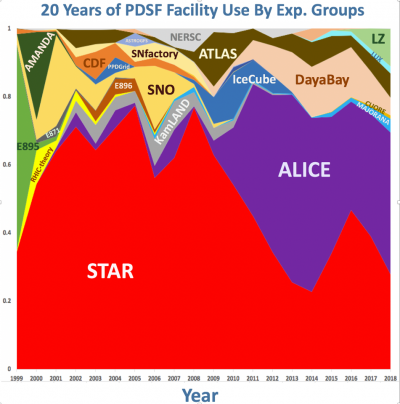 This chart shows the physics collaborations that used PDSF over the years, with the heaviest usage by the STAR and ALICE collaborations. (Credit: Berkeley Lab)

PDSF participants included collaborations for the Sudbury Neutrino Observatory (SNO) in Canada, the Solenoid Tracker at Brookhaven National Laboratory’s Relativistic Heavy Ion Collider (STAR), IceCube near the South Pole, Daya Bay in China, the Cryogenic Underground Observatory for Rare Events (CUORE) in Italy, the Large Underground Xenon (LUX), LUX-ZEPLIN (LZ), and MAJORANA experiments in South Dakota, the Collider Detector at Fermilab (CDF), and the ATLAS Experiment and A Large Ion Collider Experiment (ALICE) at Europe’s CERN laboratory, among others. The most data-intensive experiments use a distributed system of clusters like PDSF.

The STAR collaboration was the original participant and had by far the highest overall use of PDSF, and the ALICE collaboration had grown to become one of the largest PDSF users by 2010. Both experiments have explored the formation and properties of an exotic superhot particle soup known as the quark-gluon plasma by colliding heavy particles.

SNO researchers’ findings about neutrinos’ mass and ability to change into different forms or flavors led to the 2015 Nobel Prize in physics (see a related article), and PDSF played a notable role in the early analyses of SNO data.

He added, “This resource was extremely valuable in simulations and data analysis over many years, leading to our breakthroughs in neutrino physics and resulting in the award of the 2015 Nobel Prize and the 2016 Breakthrough Prize in Fundamental Physics to the entire SNO Collaboration. We are very grateful for the scientific opportunities provided to us through access to the PDSF facility.”

The cluster was a trendsetter for a so-called condo model in shared computing. This model allowed collaborations to buy a share of computing power and dedicated storage space that was customized for their own needs, and a participant’s allocated computer processors on the system could also be temporarily co-opted by other cluster participants when they were not active.

In this condo analogy, “You could go use your neighbor’s house if your neighbor wasn’t using it,” said Canon, a former experimental physicist. “If everybody else was idle you could take advantage of the free capacity.” Canon noted that many universities have adopted this kind of model for their computer users.

Importantly, the PDSF system was also designed to provide easy access and support for individual collaboration members rather than requiring access to be funneled through one account per project or experiment. “If everybody had to log in to submit their jobs, it just wouldn’t work in these big collaborations,” Canon said.

The original PDSF cluster, called the Physics Detector Simulation Facility, was launched in March 1991 to support analyses and simulations for a planned U.S. particle collider project known as the Superconducting Super Collider. It was set up in Texas, the planned home for the collider, though the collider project was ultimately canceled in 1993.

A 1994 retrospective report on the collider project notes that the original PDSF had been built up to perform a then-impressive 7 billion instructions per second and that the science need for PDSF to simulate complex particle collisions had driven “substantial technological advances” in the nation’s computer industry.

At the time, PDSF was “the world’s most powerful high-energy physics computing facility,” the report also noted, and was built using non-proprietary systems and equipment from different manufacturers “at a fraction of the cost” of supercomputers.

Longtime Berkeley Lab physicist Stu Loken, who had led the Lab’s Information and Computing Sciences Division from 1988-2000, had played a pivotal role in PDSF’s development and in siting the cluster at Berkeley Lab.

PDSF moved to Berkeley Lab in 1996 with a new name and a new role. It was largely rebuilt with new hardware and was moved to a computer center in Oakland, Calif., in 2000 before returning once again to the Berkeley Lab site.

“A lot of the tools that we deployed to facilitate the data processing on PDSF are now being used by data users at NERSC,” said Lisa Gerhardt, a big-data architect at NERSC who worked on the PDSF system. She previously had served as a neutrino astrophysicist for the IceCube experiment.

Gerhardt noted that the cluster was nimble and responsive because of its focused user community. “Having a smaller and cohesive user pool made it easier to have direct relationships,” she said.

And Jan Balewski, computing systems engineer at NERSC who worked to transition PDSF users to the new system, said the scientific background of PDSF staff through the years was beneficial for the cluster’s users.

R. Jefferson “Jeff” Porter, a computer systems engineer and physicist in Berkeley Lab’s Nuclear Science Division who began working with the PDSF cluster and users as a postdoctoral researcher at Berkeley Lab in the mid-1990s, said, “PDSF was a resource that dealt with big data – many years before big data became a big thing for the rest of the world.” 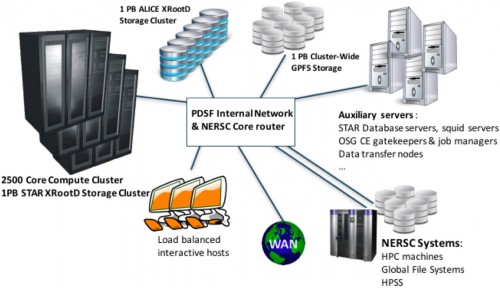 It had always used off-the-shelf hardware and was steadily upgraded – typically twice a year. Even so, it was dwarfed by its supercomputer counterparts. About seven years ago the PDSF cluster had about 1,500 computer cores, compared to about 100,000 on a neighboring supercomputer at NERSC at the time. A core is the part of a computer processor that performs calculations.

Porter was later hired by NERSC to support grid computing, a distributed form of computing in which computers in different locations can work together to perform larger tasks. He returned to the Nuclear Science Division to lead the ALICE USA computing project, which established PDSF as one of about 80 grid sites for CERN’s ALICE experiment. Use of PDSF by ALICE was an easy fit, since the PDSF community “was at the forefront of grid computing,” Porter said.

In some cases, the unique demands of PDSF cluster users would also lead to the adoption of new tools at supercomputer systems. “Our community would push NERSC in ways they hadn’t been thinking,” he said. CERN developed a system to distribute software that was adopted by PDSF about five years ago, and that has also been adopted by many scientific collaborations. NERSC put in a big effort, Porter said, to integrate this system into larger machines: Cori and Edison.

Supporting multiple projects on a single system was a challenge for PDSF since each project had unique software needs, so Canon led the development of a system known as Chroot OS (CHOS) to enable each project to have a custom computing environment.

Porter explained that CHOS was an early form of “container computing” that has since enjoyed widespread adoption.

PDSF was run by a Berkeley Lab-based steering committee that typically had a member from each participating experiment and a member from NERSC, and Porter had served for about five years as the committee chair. He had been focused for the past year on how to transition users to the Cori supercomputer and other computing resources, as needed.

Balewski said that the leap of users from PDSF to Cori brings them access to far greater computing power, and allows them to “ask questions they could never ask on a smaller system.”

He added, “It’s like moving from a small town – where you know everyone but resources are limited – to a big city that is more crowded but also offers more opportunities.”