Transfer of 120 Petabytes of Data will take Two Years 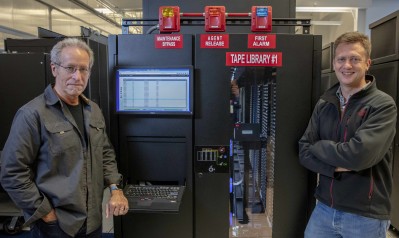 When the National Energy Research Scientific Computing Center (NERSC) relocated from its former home in downtown Oakland, Calif. to Lawrence Berkeley National Laboratory’s Shyh Wang Hall in 2015, not everything came with. The last remaining task in the heroic effort of moving the supercomputing facility and all of its resources is 43 years of archival data that’s stored on thousands of high performance tapes in Oakland. Those 120 petabytes of experimental and simulation data have to be electronically transferred to new tape libraries at Berkeley Lab, a process that will take up to two years — even with an ESnet 400 Gigabit “superchannel” now in place between the two sites.

Tape for archival storage makes sense for NERSC and is a key component of NERSC’s storage hierarchy. Tape provides long-term, high capacity stable storage and only consumes power when reading or writing, making it a cost-effective and environmentally friendly storage solution. And the storage capacity of a tape cartridge exceeds that of more commonly known hard disk drives.

“Increasing hard disk drive capacity has become more and more difficult as manufacturers need to pack more data into a smaller and smaller area, whereas today’s tape drives are leveraging technology developed for disks a decade ago,” said Damian Hazen, NERSC’s storage systems group lead. Hazen points out that tape storage technology has receded from the public eye in part because of capacity online data storage services provided by the likes of Google, Microsoft, and Amazon, and that disk does work well for those with moderate storage needs. But, unbeknownst to most users, these large storage providers also include tape in their storage strategy.

“Moderate” does not describe NERSC’s storage requirements. With data from simulations run on NERSC’s Cori supercomputer, and experimental and observational data coming from facilities all over the U.S. and abroad, the NERSC users send approximately 1.5 petabytes of data each month to the archive.

“Demands on the NERSC archive grow every year,” Hazen said. “With the delivery of NERSC’s next supercomputer Perlmutter in 2020, and tighter integration of computational facilities like NERSC with local and remote experimental facilities like ALS and LCLS-II, this trend will continue.”

To keep up with the data challenges, the NERSC storage group continuously refreshes the technology used in the archive. But in relocating the archive to the environmentally efficient Shyh Wang Hall, there was an additional challenge. The environmental characteristics of the new energy-efficient building meant that NERSC needed to deal with more substantial changes in temperature and humidity in the computer room. This wasn’t good news for tape, which requires a tightly controlled operating environment, and meant that the libraries in Oakland could not just be picked up and moved to Berkeley Lab. New technology emerged at just the right time in the form of an environmentally isolated tape library, which uses built-in environmental controls to maintain an ideal internal environment for the tapes. NERSC deployed two full-sized, environmentally self-contained libraries last fall. Manufactured by IBM, the new NERSC libraries are currently the largest of this technology in the world. 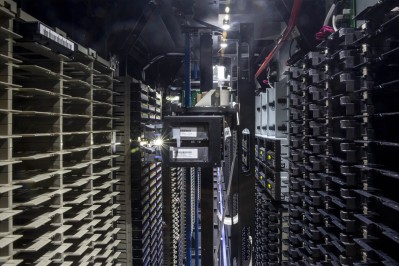 “The new libraries solved two problems: the environmental problem, which allowed us to put the tape library right on the computer room floor, and increasing capacity to keep up with growth as we move forward,” said Wayne Hurlbert, a staff engineer in NERSC’s storage systems group. Tape cartridge capacity doubles roughly every two to three years, with 20 terabyte cartridges available as of December 2018.

The newer tape cartridges have three times the capacity of the old, and the archive libraries can store a petabyte per square foot. With the new system in place, data from the tape drives in Oakland is now streaming over to the tape archive libraries in the Shyh Wang Hall computer room via the 400 Gigabit link that ESnet built three years ago to connect the two data centers together. It was successfully used to transfer file systems between the two sites without any disruption to users. As with the file system move, the archive data transfer will be largely transparent to users.

Even with all of this in place, it will still take about two years to move 43 years’ worth of NERSC data. Several factors contribute to this lengthy copy operation, including the extreme amount of data to be moved and the need to balance user access to the archive.

“We’re very cautious about this,” Hurlbert said. “We need to preserve this data; it’s not infrequent for researchers to need to go back to their data sets, often to use modern techniques to reanalyze. The archive allows us to safeguard irreplaceable data generated over decades; the data represents millions of dollars of investment in computational hardware and immense time, effort, and scientific results from researchers around the world.”