“NERSC is pleased to recognize these young researchers’ outstanding scientific accomplishments using HPC,” said Richard Gerber, NERSC Senior Science Advisor. “They nicely represent the next generation of computational scientists who are going to drive scientific discovery over the coming decades.” 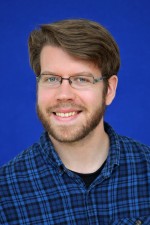 To address this challenge, Roberg-Clark uses a massively parallel particle-in-cell code to study thermal conduction and heat flux suppression in collisionless plasmas. He modified the code to incorporate a new boundary condition: a thermal gradient supported by different temperature walls at the ends of the computational domain. He then ran simulations, several using tens of thousands of cores on NERSC’s Edison supercomputer, and analyzed the results.

“I'm honored to receive this award and am grateful to NERSC for making this exciting and computationally challenging work possible,” Roberg-Clark said. "I would like to thank the awards committee, as well as my advisors James Drake, Marc Swisdak, and Christopher Reynolds, who played pivotal roles in this work."

Since 2016, Roberg-Clark has published three first-author papers on this research. In the first, which has so far been cited 27 times, he showed that resonant interactions with Whistler modes can suppress thermal conduction for parameter regimes relevant to the intracluster medium. In the subsequent two papers (both from 2018 and already cited a combined 29 times), he explored the consequence of changing the plasma beta (the ratio of thermal to magnetic pressure). Those papers can be found here and here. 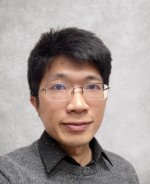 Haoming Liang, a post-doctoral researcher at West Virginia University (WVU), was honored for using NERSC resources to explore the dynamics of magnetic reconnection in plasma physics in novel ways that are expected to dramatically impact the field, according to Paul Cassak, a professor of plasma physics theory and computation at WVU who nominated Liang for the award.

One of the grand challenge problems in plasma physics, Cassak noted, is magnetic reconnection, which occurs when oppositely directed magnetic fields come together and effectively break and cross connect. What makes reconnection problematic is that it is multi-scale; the energy released by the magnetic field can drastically alter the large-scale system, but the physics that allow the magnetic fields to reconnect takes place at extremely small scales.

To address this challenge, Liang implemented two different entropy diagnostics into p3d, a state-of-the-art electromagnetic particle-in-cell (PIC) code. He then used the entropy to assess how much numerical dissipation was occurring in the p3d simulation, and did a systematic analysis of parameters the user must set to do the entropy calculation. He also used the entropy diagnostic to learn some important basic physics of reconnection.

“This work will have a profound impact on fusion, solar and space physics, and the burgeoning field of plasma astrophysics for years to come,” Cassak said. “I believe that calculating entropy in PIC codes will begin to become the norm.”

“I am truly honored to be recognized for my work on kinetic entropy in magnetic reconnection using NERSC resources,” Liang said. “This award reinforces for me that this research is important, which greatly encourages me to improve upon the technique and apply it to more plasma systems where it will be of use.” 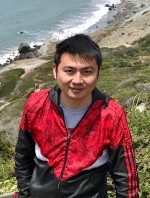 Xie Zhang, a postdoctoral researcher in Chris Van de Walle’s group at the University of California, Santa Barbara, is being recognized in this category for producing essential insights into recombination mechanisms in hybrid perovskites – highly efficient materials for photovoltaics – based on cutting-edge first-principles simulations. Understanding the underlying mechanisms of these materials is essential for uncovering new design principles for efficient solar cell materials and for designing optimal device structures.

Toward this end, Zhang developed a first-principles approach to quantitatively compute the spin texture of the electron and hole bands and the radiative recombination coefficient. These calculations require complex computations of eigenvalues, wavefunctions, and dipole matrix elements for dense k-point meshes in the Brillouin zone. Benefiting from the computational resources provided by NERSC, Zhang demonstrated that the radiative recombination in hybrid perovskites is actually very strong – a finding that should put an end to misguided attempts to analyze and design device characteristics based on erroneous assumptions.

“Zhang has addressed technologically relevant problems in hybrid perovskites by combining cutting-edge quantum mechanical methodologies with the NERSC high-performance supercomputing facilities,” Van de Walle said. “The unique insights obtained in these studies provide a new understanding of these materials and point the way toward improving their performance.”

“I am thrilled to receive the prestigious NERSC Early Career Achievement Award. It is not only a distinct honor for myself, but also an affirmation of the fundamental and systematic approach to research in the Van de Walle group at UCSB,” Zhang said. “The constant support from my advisor and colleagues has been essential.”

Since joined the Van de Walle group in 2017, he added, “we have been focusing on elucidating the recombination mechanisms in halide perovskites and have built up a set of computational approaches to address this problem. The actual calculations require compute resources that are well beyond the capability of most supercomputing centers. NERSC made the realization of our highly demanding computations possible, allowing us to develop a deep understanding of how recombination in halide perovskites operates."