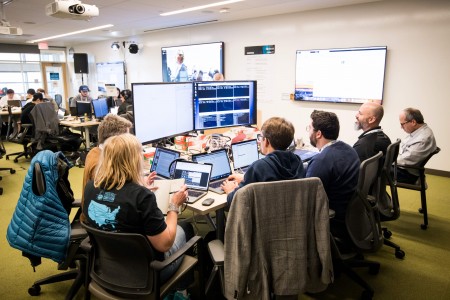 In a face-off between four university teams from California hosted at Berkeley Lab and more than 60 teams representing six other national labs, the University of Central Florida emerged as the national winner of the U.S. Department of Energy's fourth annual CyberForce Competition. The simulcast event took place on Saturday, Dec. 1, in Shyh Wang Hall, with some 50 volunteers from NERSC and other parts of Berkeley Lab supporting the day-long event. This was Berkeley Lab's first year participating in the event.

In the competition, student teams engaged in interactive, energy-focused scenario activities centered on cybersecurity methods, practices, strategy, policy, and ethics – all while defending their network against a team of “hackers” played by security professionals and government representatives.

“With the ever-increasing amount of technology that relies on and is accessible via the Internet, cybersecurity has become a high priority for the DOE, and it is critical that we help train the next generation of cybersecurity professionals to ensure they are prepared to meet this need,” said Horst Simon, Berkeley Lab’s Deputy Director for Research. 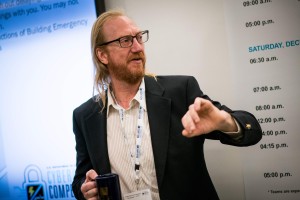 Each national lab’s regional winner and DOE’s national winner took home a medal. All teams had the option to take home the high-performance cluster and industrial control system that they configured for the competition.

According to Brent Draney, who leads the networking and security group at NERSC and served as the Lab’s site lead in organizing the event, all students, whether they won or lost, also took home something else: real-world experience in a national lab setting. “With this event, we’re hoping to build a pipeline of students who care about cybersecurity in a national lab environment and get them inspired to work at Berkeley Lab,” he said. More than 50 volunteers from NERSC and other parts of Berkeley Lab participated in the day-long event.