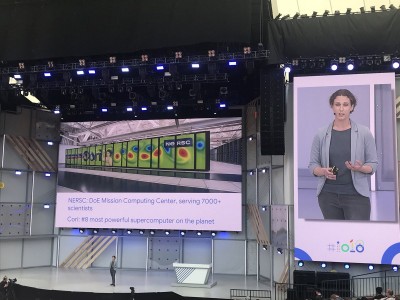 NERSC's Debbie Bard briefed Google I/O conference attendees on how NERSC is applying TensorFlow to science problems, including exploring the large-scale structure of the universe.

NERSC’s Debbie Bard was invited to give a presentation May 10 during Google I/O, Google’s annual developer’s conference held in Mountain View, CA, where she talked about how machine learning and deep learning are being used in cosmology to explore the large-scale structure of the universe.

At NERSC, Bard - acting group lead for the Data Science Engagement Group - is working to scale up TensorFlow, an open source framework for machine learning developed by Google, to run effectively on thousands of nodes on the center's Cori supercomputer.

“One of the nice things about scientific uses of deep learning versus commercial applications is that the challenges are different and scientists use it in a different way,” Bard said. “For example, we are looking at 3D data sets because at lot of data sets in science are 3D, which is something you don’t see that much in the commercial sector. Plus we are doing code optimization for 3D data sets.”

Bard’s talk covered the use of generative networks to augment or emulate computationally expensive simulations of the universe; how researchers can use the features learned by a neural network to gain insight into which structures in the universe are most affected by our theoretical model; and how scientists can use deep learning to predict theoretical parameters from the 3D distribution of matter in the universe.