NERSC Recognized by NASA for Contributions to Planck Mission

Artist's rendition of the Planck satellite in front of a simulation of the Cosmic Microwave Background. (Image credit: ESA/NASA Planck Mission)

Launched in 2009, the Planck satellite was a joint project between the European Space Agency and NASA. It spent four years capturing the oldest light in the universe, the cosmic microwave background (CMB), which was emitted approximately 13.8 billion years ago. These observations contributed to the most detailed map of the early universe ever created and supplied further evidence for an early phase of accelerated cosmic expansion, called inflation, during which the seeds of all structures, from galaxies to planets, were sown. 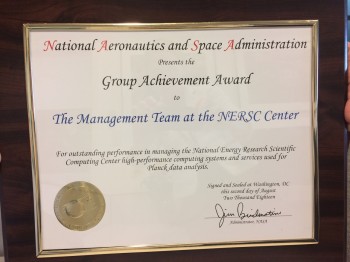 In addition to pushing the limits of cosmological research, Planck also pushed the boundaries of high performance computing, and one of the major U.S. contributions to this international collaboration was in data analysis. A pioneering agreement between the U.S. Department of Energy (DOE) and NASA guaranteed that the National Energy Research Scientific Computing Center (NERSC) at Lawrence Berkeley National Laboratory (Berkeley Lab) would provide the high performance computing support essential to the mission's success. And for that support, NERSC was recently recognized with a NASA Group Achievement Award.

“We could not have done all of the science data analysis that was done without high performance computing, and the largest Planck computing jobs were all run at NERSC. Planck, the greatest cosmology mission yet flown, depended critically on NERSC resources and the excellent technical support that we received throughout the project. This award was richly deserved,” said Charles Lawrence of NASA’s Jet Propulsion Laboratory and project scientist for the U.S. Planck Project. He also nominated NERSC for the award.

According to Julian Borrill, a Berkeley Lab scientist and the U.S. Planck Team’s computational systems architect, one of the biggest challenges for a long-term mission like Planck is working with a data center that will be pushing the technological boundaries for two decades. Borrill won a NASA Exceptional Public Achievement Medal in 2016 for his contributions to the Planck project. 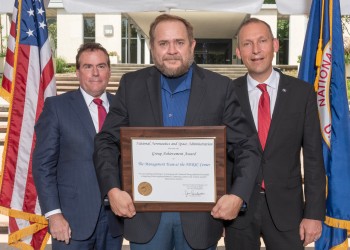 “We had big data before big data was a thing. The Planck mission ramped up at Berkeley Lab in 2000, and in the first 10 years we just ran simulations to prepare us for the real data,” said Borrill. “When you have a long-term mission like Planck, national supercomputing centers like NERSC are a great resource because you have the longevity and the predictability that the center will grow to meet the mission’s needs. And because everyone in this international collaboration also needs to access the data, an open data center like NERSC allows for that.”

Borrill also notes that a next-generation cosmic microwave background experiment, called CMB-S4, also intends to follow in Planck’s footsteps and center its data management at NERSC. CMB-S4 is a joint project between DOE and the National Science Foundation. Lawrence is on the project’s governing board and Borrill is its co-spokesperson.

“Clearly this was a team effort. Despite the change in management and systems, we never had the feeling that anything was dropped,” said Lawrence. “The only decision that I had to make with this nomination was the optimum time to submit it. This is the last year of the agreement between NASA and DOE, so it seemed fitting.”

“George Smoot’s Nobel Prize winning analysis of the Cosmic Microwave Background Explorer data using supercomputers of their time showed us the potential impact that these resources could have on CMB research. In the mid 1990s NERSC started supporting CMB research with projects like BOOMERANG and the collaboration demonstrated significant scientific impact. The Planck mission continues this tradition of CMB computing at Berkeley Lab,” said Horst Simon, Deputy Director of Berkeley Lab and former NERSC Director.

“This award confirms our beliefs that in the era of big data, national supercomputing centers like NERSC are an integral part of the scientific process. And we are looking forward to continue this long tradition by supporting CMB-S4 in the future,” he adds.

More on CMB analysis at NERSC: