The paper, “Graph Neural Networks for IceCube Signal Classification,” involves some of the first research to apply a new form of deep learning on graphs and has yielded some very promising results for the IceCube project, noted Lisa Gerhardt, a big data architect at NERSC and a co-author on the paper. The paper was presented by Choma on behalf of the IceCube Collaboration, which provided the simulation and much of the analysis paradigm

“Tasks involving the analysis of geometric data have recently gained prominence in the machine learning community, giving birth to a rapidly developing field of geometric deep learning,” the team wrote. “In this paper we study the application of graph neural networks (GNNs) to the challenging problem of neutrino detection in the IceCube observatory.”

Through this work they were able to demonstrate the effectiveness of their GNN architecture on a task classifying simulated IceCube events, showing that it could outperform a traditional physics-based method and classical 3D convolution neural networks. 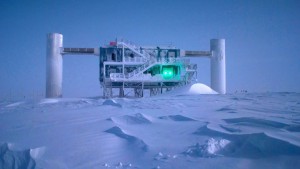 This work is the result of a collaboration between NERSC and members of Berkeley Lab’s Nuclear Science Division (NSD) who are active in the IceCube Collaboration. The NSD contingent included Spencer Klein and Tomasz Palczewski, who provided the baseline (non-machine-learning) comparison point. Other co-authors were Wahid Bhimji and Prabhat of NERSC; Zahra Ronaghi, a former Berkeley Lab post-doc now with NVIDIA; Federico Monti of Universita dell Svizzera Italizana; Michael Bronstein of Imperial College; and Joan Bruna of New York University.

IceCube is a neutrino observatory located at the South Pole whose primary purpose is to look for high-energy neutrinos that are produced by the same cosmic particle accelerators that produce ultra-high energy cosmic rays.